My Rented Garden: Nil to Abundance in 2 Seasons 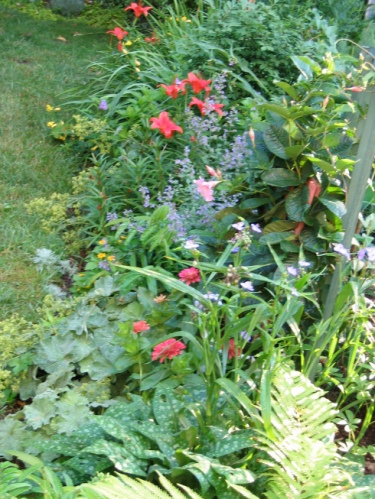 WELL, THAT WASN’T SO BAD, WAS IT? Unless we get some late snowstorms (which have been known to happen), spring is just weeks away. My thoughts are turning to my backyard in Boerum Hill, going into its third season.

I’m a renter here, which means:

But as my pictures show, you can do a lot with a little, and fast.

When I arrived in November 2006, I found a scraggly rectangle of lawn about 22’x40′. Along the back was a raised bed held back by a stacked stone wall. All totally devoid of plants, except for one glorious dogwood tree in a far corner. (The photo below shows the garden in April of ’07, by which time I had dug perimeter beds and stuck a few things in them.) 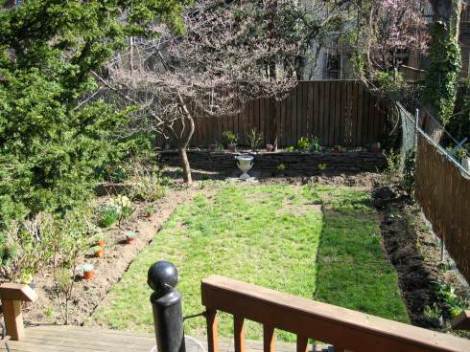 The grass was bordered on one side by some phenomenal hydrangea bushes that belong to my next-door neighbors but topple into my yard, and on the other side, by a hideous, depressing, 7-foot-tall chain-link fence.

My first thought was to disguise the prison fence by lashing rolled twig fencing (useful stuff; you can buy it online) to it with cable ties.  That didn’t fool anyone, plus it blocked light.

Then I asked my next-door neighbor on the chain-link side whether he’d ever thought of removing the fence. I went out for a few hours, and when I returned, the hideous, depressing fence was GONE! My dear neighbor (who also mows my lawn of his own volition) had done a masterful job of fence-removal in a single afternoon.

That first tentative, unimaginative step in the spring of ’07  — digging three-foot-wide planting beds around the perimeter of the rectangle — was followed by outreach to friends and neighbors. I filled the beds with with catch-as-catch-can plants from a variety of sources.

These included buttercups, irises, lilies from garden-mad neighbors in Boerum Hill who were dividing their excess, as well as:

The first season was good; by the second season, I had color that lasted from early spring through October (someone gave me asters!) You know what they say about perennials: “The first year they sleep, the second year they creep, the third year they leap.” These seemed to be leaping pretty good by Year 2. 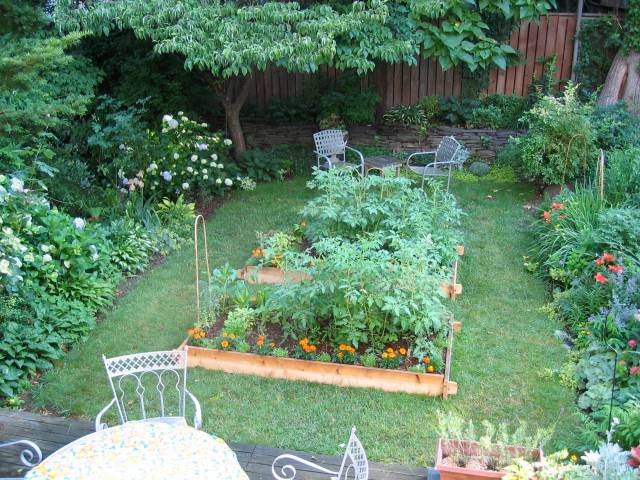 The color show is aided by containers of coleus and other annuals, and I cheat by placing large containers of annuals right in the beds. By mid-summer you don’t even see the pots. 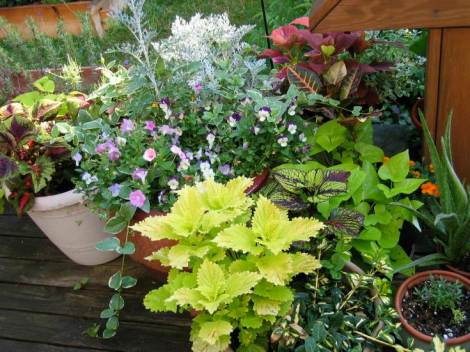 It’s a north-facing garden, so it has challenges, but the sky is open. This past summer, I decided to try tomatoes for the first time. I bought two simple 4’x8′ raised-bed kits from a company in Massachusetts that makes them Colonial-style (they’re planks of cedar attached at the corners with pegs).

Then I made the classic newbie error of planting too much — 16 tomato plants, when four would have been sufficient. By August, it was out of control and an eyesore. I kept trimming and staking, trimming and staking; more trouble than it was worth. This year I’ll leave one raised bed in the sunnier position with herbs, lettuce, and a few tomatoes, and probably dismantle the other. 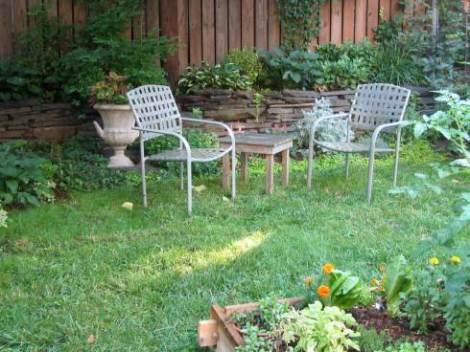 I’m raring to go with spring garden-cleaning. The next warmish weekend, I’m on it! 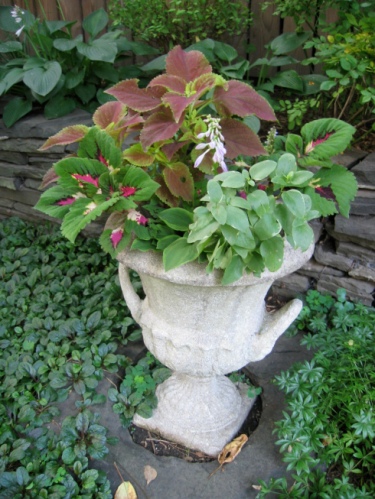 11 Responses to My Rented Garden: Nil to Abundance in 2 Seasons