I DIDN’T GO TO PHILADELPHIA last week just to walk its cobbled alleys and take pictures of cute houses. I went to see my son and his girlfriend in Fishtown, and to catch the van Gogh exhibition at the Philadelphia Museum of Art, above, before it closes May 6. Full of rarely-seen paintings from his last four fevered years, gathered from around the world, the van Gogh (despite the terribly long line to get in, even with timed tickets) did not disappoint.

Nor did the city itself. I was with my indefatigable sister; together we covered half a dozen neighborhoods, including Old City, Society Hill, Rittenhouse Square, and Italian Market, in the space of two days. There seems no end of interesting buildings in Philadelphia, or of the fascinating things you can glimpse through iron gates and discover inside building lobbies.

Paid my first visit to the recently opened Perelman Building of the Philadelphia Museum, above, a decorative arts annex with several galleries carved into its remodeled interior. Detail, below, of its impressive Art Deco doors. 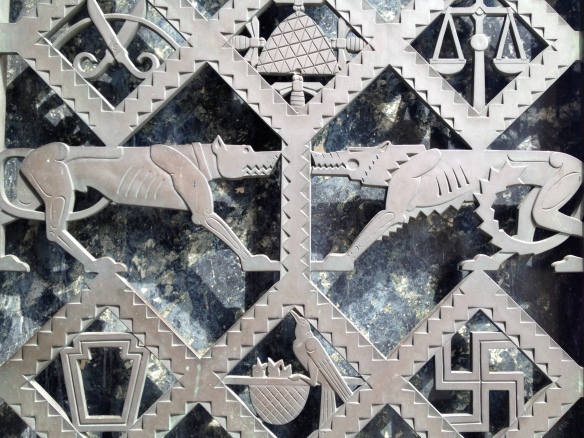 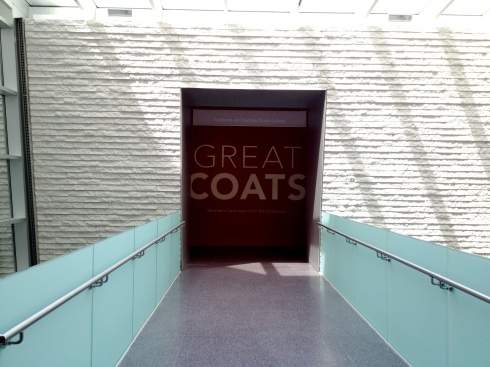 ‘Great Coats,’ above, is one of several fun shows ongoing in the Perelman Building, along with 20th century photography and furniture, and fiber arts inspired by the botanical world.

The view from our 7th floor room at the Alexander Inn, above.

Behind an 18th century house museum (all of three rooms) on Elfreth’s Alley in Old City, the oldest continuously inhabited street in the U.S.

Mysterious building, above, in Old City, presently vacant but… what potential!

Self-portrait with iPhone at Anthropologie’s flagship store, in an over-the-top mansion on Rittenhouse Square. 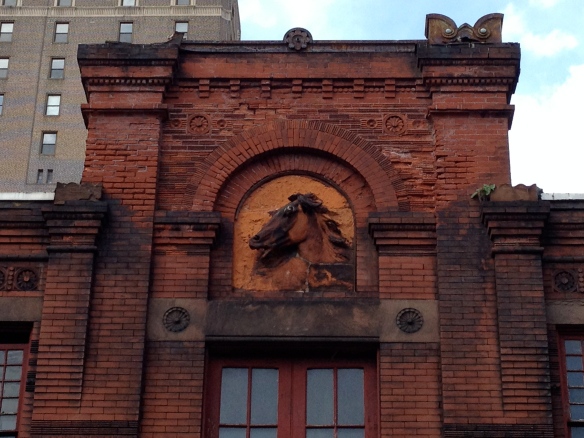 The horse’s head on a brick building off Rittenhouse Square probably signifies its earlier use as a stable.

On Day 2, we had brunch at Sabrina’s in the Italian Market district, where produce and other food stalls are arrayed on the sidewalk underneath corrugated awnings. Italian Market signage, above and below.

Later, we strolled through Society Hill, below, admiring brickwork, shutters, and window boxes and peeking through gates at gardens filled with tidy boxwoods (that’s the garden of the late 18th century Powell House, below). Society Hill was where, in the 1950s, the preservation movement took hold and the revival of Philadelphia’s derelict vintage housing stock began.

Below, Philadelphia’s most extraordinary hidden treasure: an early 20th c. wall mural rendered in colored glass by L.C. Tiffany Studios, after a painting by Maxfield Parrish. It’s in the lobby of the Curtis Publishing Building on Washington Square, open to all.

CONTRARY TO POPULAR BELIEF, I do sometimes go across the river to the little island with the big buildings. And I usually come back with a sigh of relief to the low-rise precincts of Brownstone Brooklyn.

However, a recent stroll through the streets of Chelsea reminded me how very fine Manhattan’s 19th century townhouses can be, especially when bedecked with wisteria, as some of them were last week.

WHAT CAN YOU DO with an L-shaped backyard that’s only 17-and-a-half feet wide and 8 feet 8 inches deep, for the most part? What landscape architect Liz Farrell did behind one Brooklyn row house was build it out with ipe, a Brazilian hardwood, so that the entire backyard became an inviting deck. There’s room for seating, dining, and grilling, as well as arbors and planter boxes for growing things; a thick bamboo hedge provides total privacy from the neighbors.

It’s the subject today of The Outsider, my new Sunday column for the massive Brooklyn website Brownstoner.com. Take a look here.

BACK FROM TWO BUSY DAYS in Philadelphia and a fair amount of wandering in neighborhoods previously admired only from behind the windshield of my car.

I wanted to go back to Fitler Square, a few blocks southwest of elegant Rittenhouse Square and far quieter. It’s a pleasant residential district of very young families and very old houses (mid-18th century, if the plaques are to be believed), colorful shutters and cobbled streets.

A PERFECTLY INTACT 1870s row house with spare, sophisticated decor is the subject of today’s Insider on Brownstoner.com. The photos, by Tria Giovan, come from the premier issue of New York Cottages & Gardens magazine, where I’m a contributing editor. Click here to see it all.