Tough Life: A Week in the Yucatan 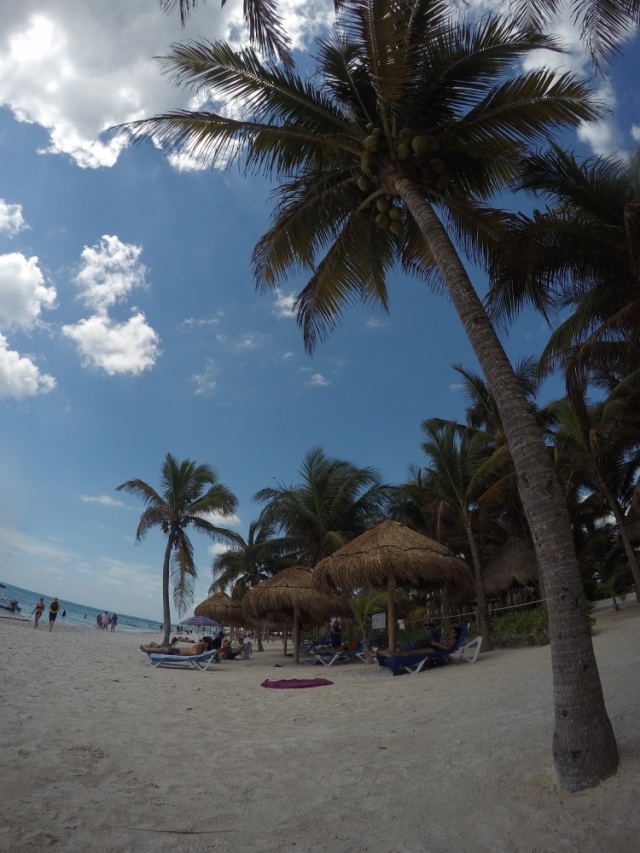 LAST MONTH, I SNUCK IN ANOTHER VACATION, this one a weeklong mother-daughter event. Destination: Tulum, Mexico, on the Caribbean edge of the Yucatan peninsula, a place I’d first heard of years ago when it was a laid-back beach town known for yoga retreats and lack of electricity. It’s no longer quite as laid back, with development proceeding apace, and I had the feeling we got there in the nick of time. 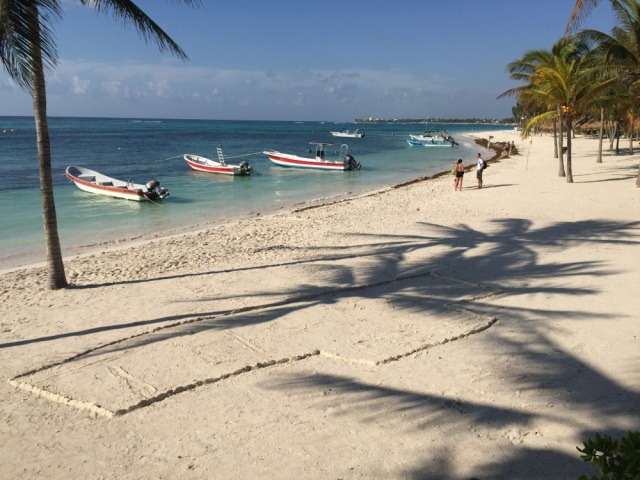 We flew into Cancun and taxi’d south, spending the first two nights in Akumal, about half an hour north of Tulum. There, we could afford a hotel right on the calm, crescent- shaped Bay of Akumal, top, above and below, known as a sea turtle habitat and very popular for snorkeling (to the detriment of the turtles). 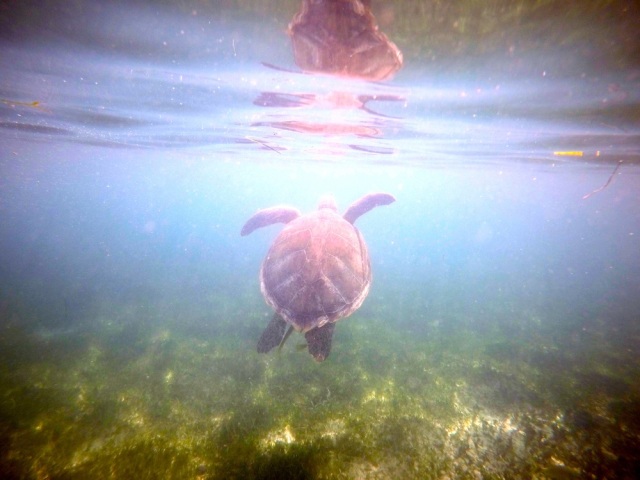 We stayed in a stone bungalow, below, at the Hotel Akumal Caribe, a circa 1970 all-inclusive resort that was the first-ever in the area. 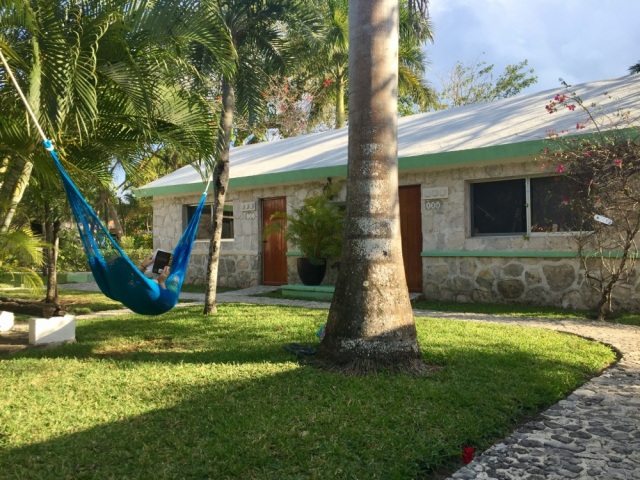 Now, the sole highway between Cancun and Tulum is lined with much glitzier hotels, but we loved the funkiness of the Akumal Caribe, and the convenience.

For two days, we found all we needed on the hotel property, including a yoga studio, below, and good food in several on-site restaurants of varying degrees of casual, all with views of the water. 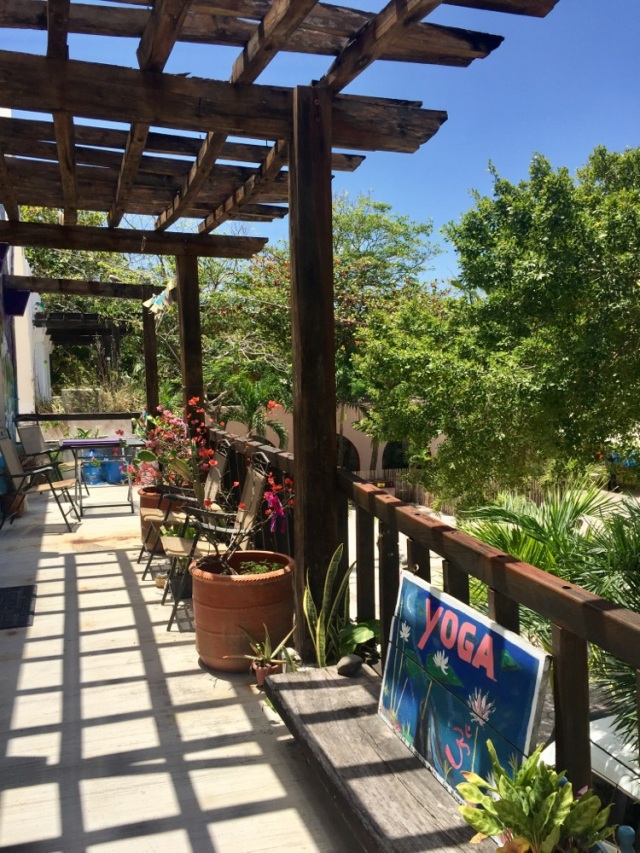 There’s a scuba dive center on the hotel grounds, and my daughter, Zoë, a scuba pro, went out to the coral reefs one day; another day, she dove at Dos Ojos, a nearby cenote, or cavern, of interest mainly for its geology. See her spectacular photos, below. 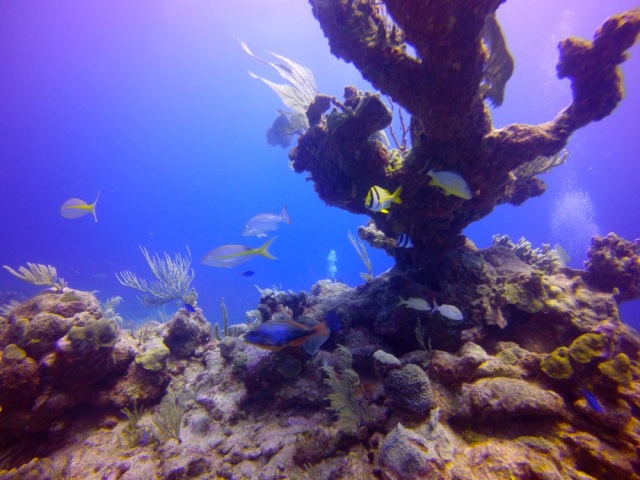 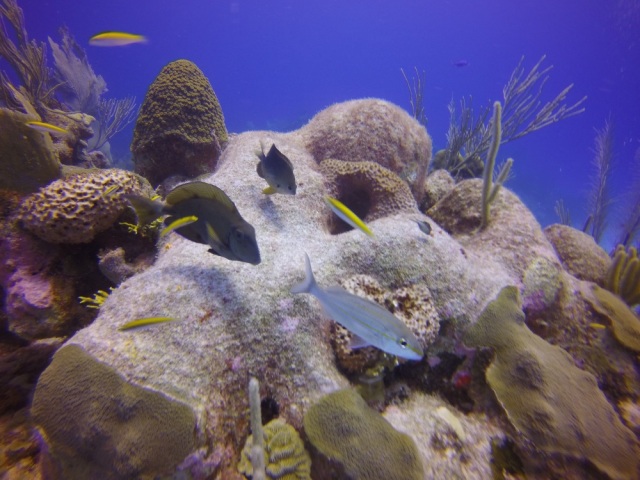 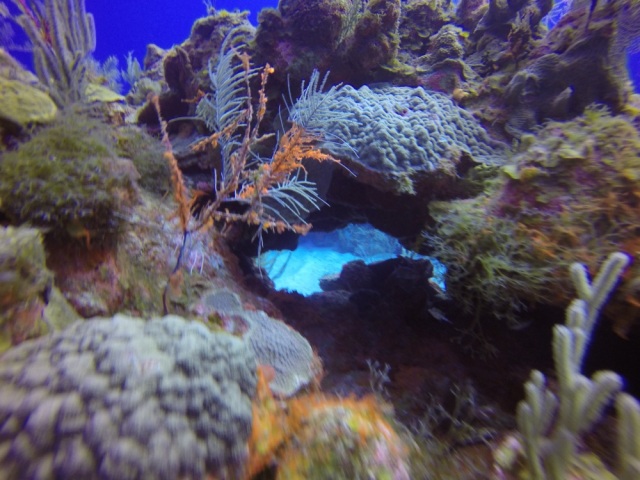 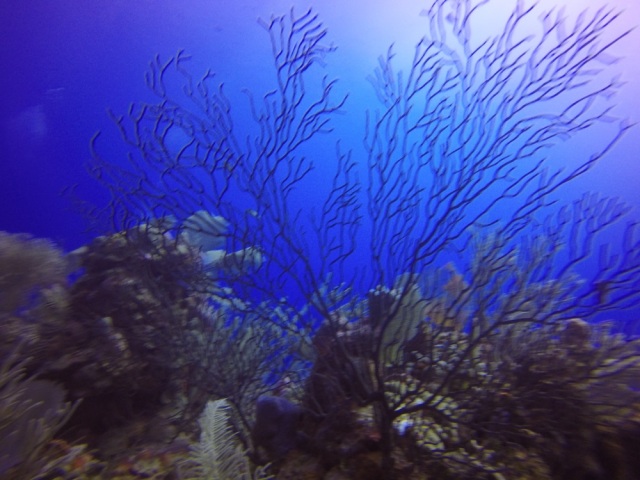 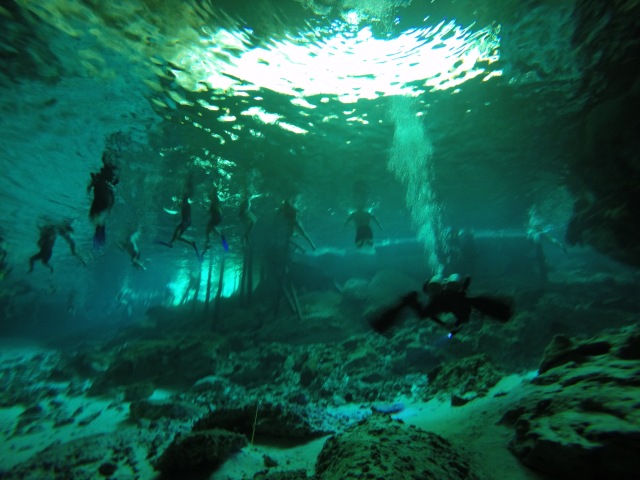 On Day 3, we decamped for Tulum, a $20 taxi ride due south, and settled in for the next few nights at Posada Luna del Sur. We loved our studio apartment with its own lush garden, and the breakfast served on the hotel’s rooftop each morning.

The charms and limitations of Tulum immediately became evident. The seven-mile-long strip of beachfront, justifiably renowned for its beauty, is lined with low-rise resorts, architecturally modest and nearly hidden in jungle foliage, but with prices commensurate with their waterfront location ($400-500/night).

Like many visitors, we stayed instead in the pueblo, or town, where the real folks live, about three miles inland. The pueblo definitely has its own appeal and a slew of inviting open-air bars and restaurants. The main drawback is that one is beholden to taxis. They’re plentiful enough, and the drivers are polite and trustworthy (the hotel provided a helpful list of official prices). But the beach is just too far away to walk. 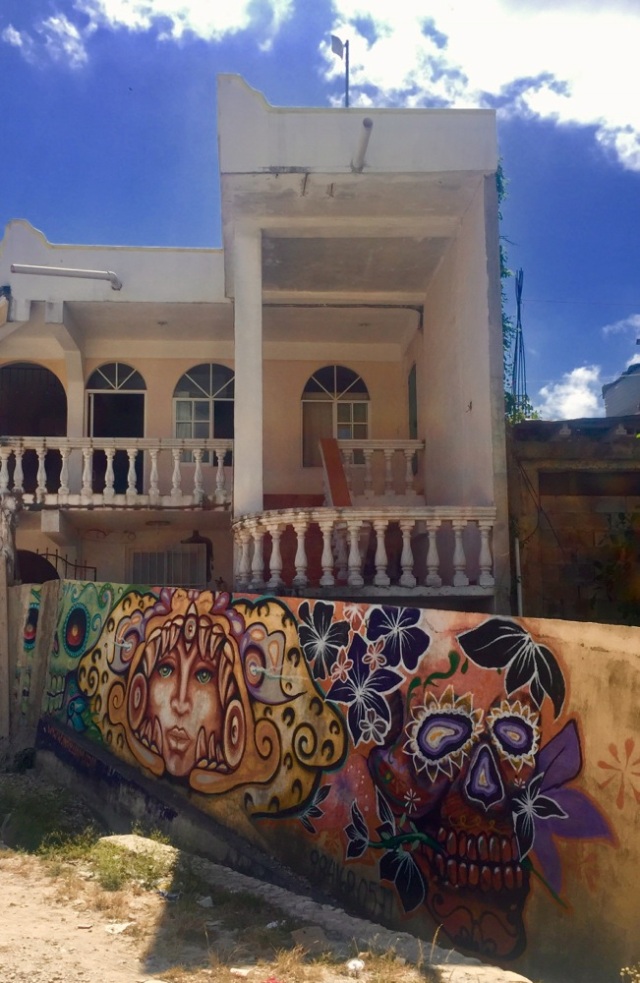 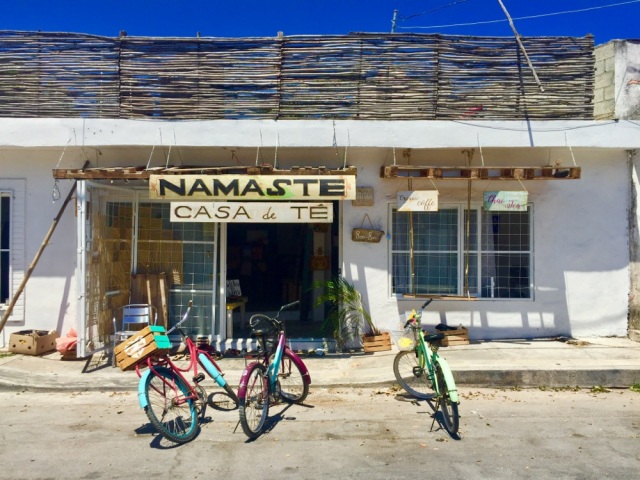 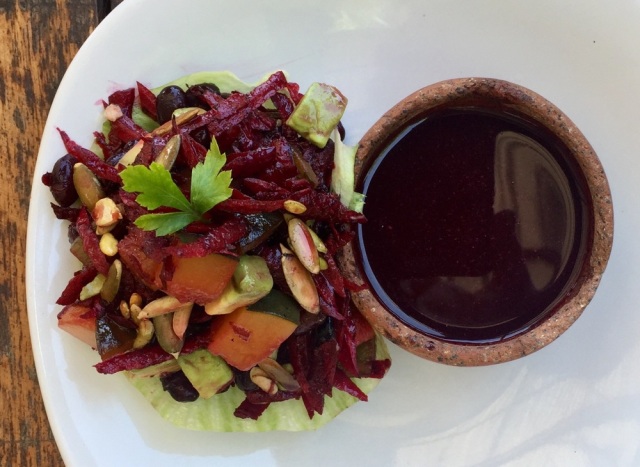 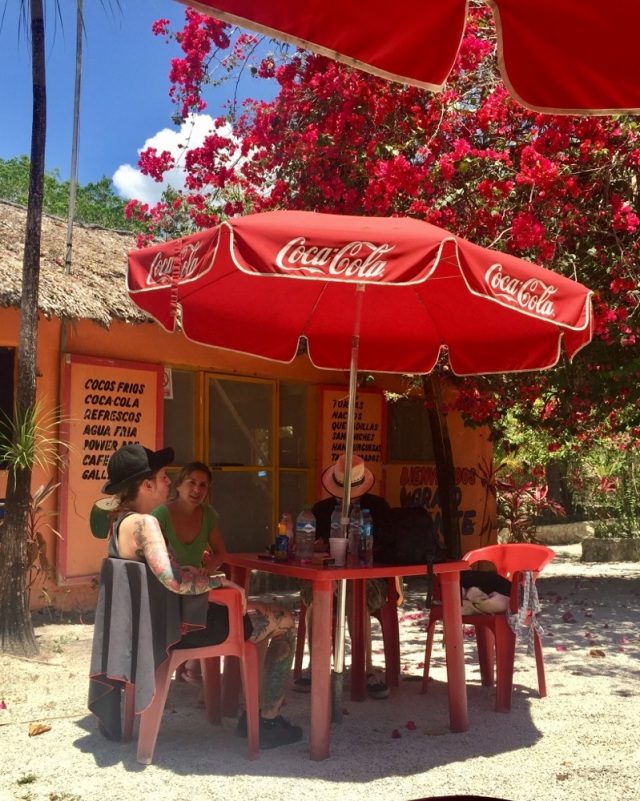 Tulum is known, too, for its superb Mayan ruins, below, 800-year-old remnants of indigenous culture right at the water’s edge. Once painted bright colors, with fires atop the main structure to signal passing boats, the buildings are now weathered and populated mainly by iguanas. It’s a must-do in Tulum, and we did, on the first morning. 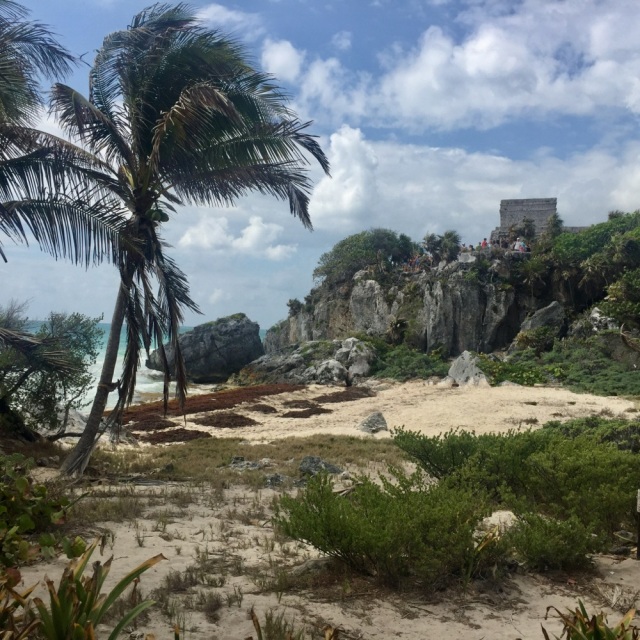 We spent much of our remaining time at the beach clubs lining the sandy rim of the sea. All the beaches are public; each hotel has its arrangement of chaises and palapas (thatched umbrellas). 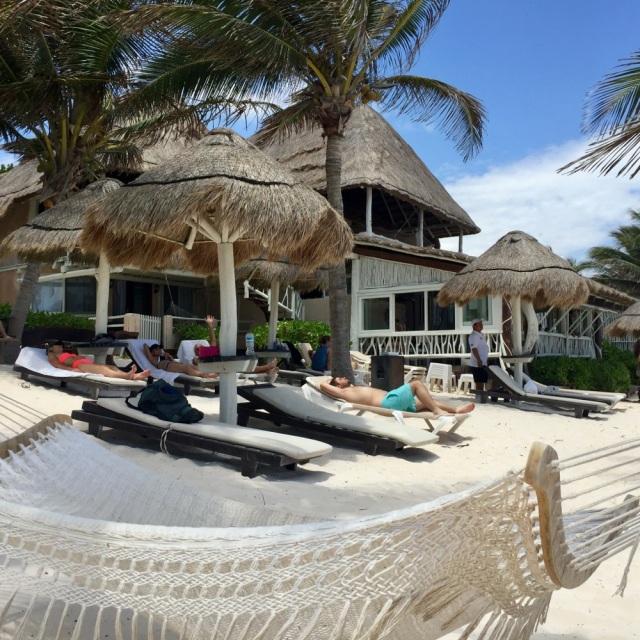 You can settle in at any one of the beach clubs for the day, ordering from young waitstaff who run hither and thither to bring you towels, drinks, snacks. For lunch, we’d go to one of the many more or less interchangeable beachfront restaurants, to gaze out over the water while consuming our cocktails and shrimp fajitas. 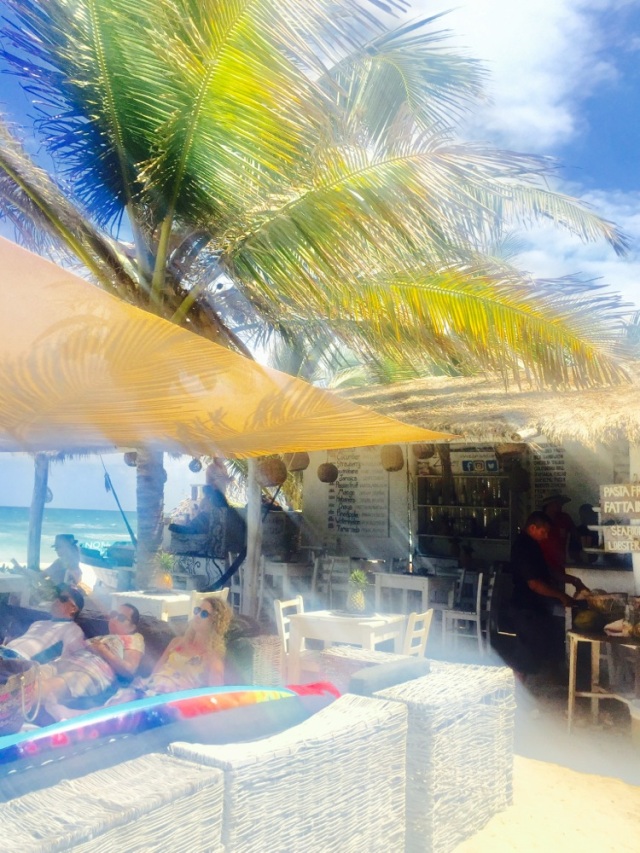 Had we not had our swimming and snorkeling time in the tranquil Bay of Akumal, we might have been more disappointed that the waters were too rough and the days too windy for us to swim in Tulum.

We got a lot of reading done and walked on the beach and along the boutique- and cafe-filled beach road, below. 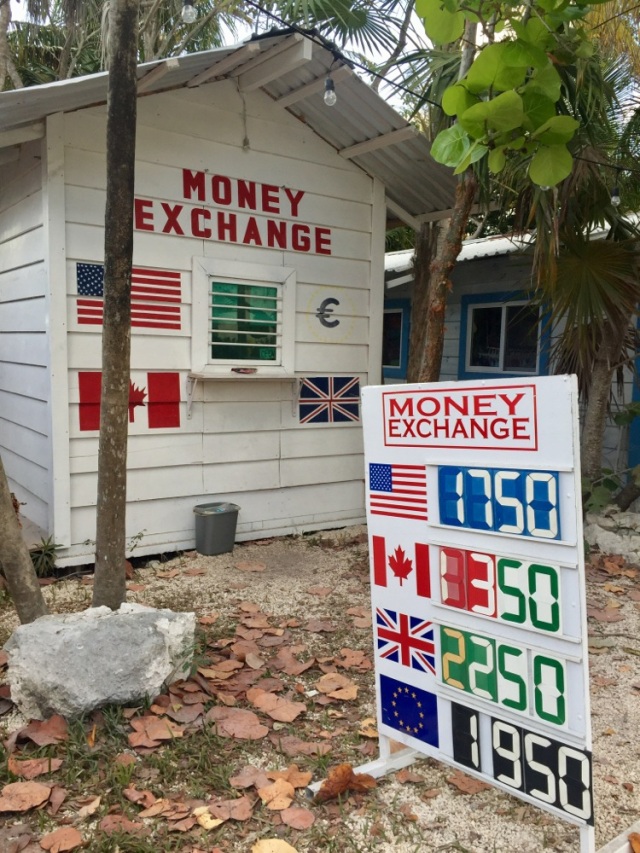 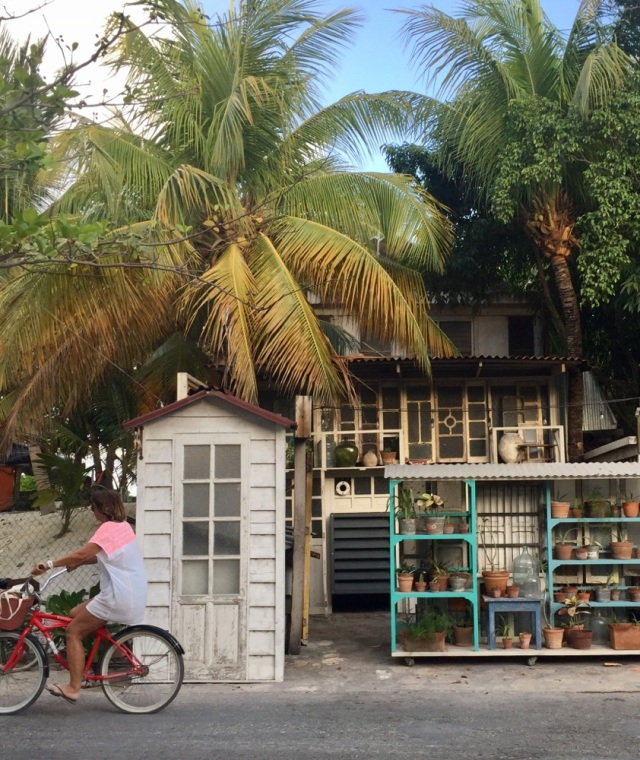 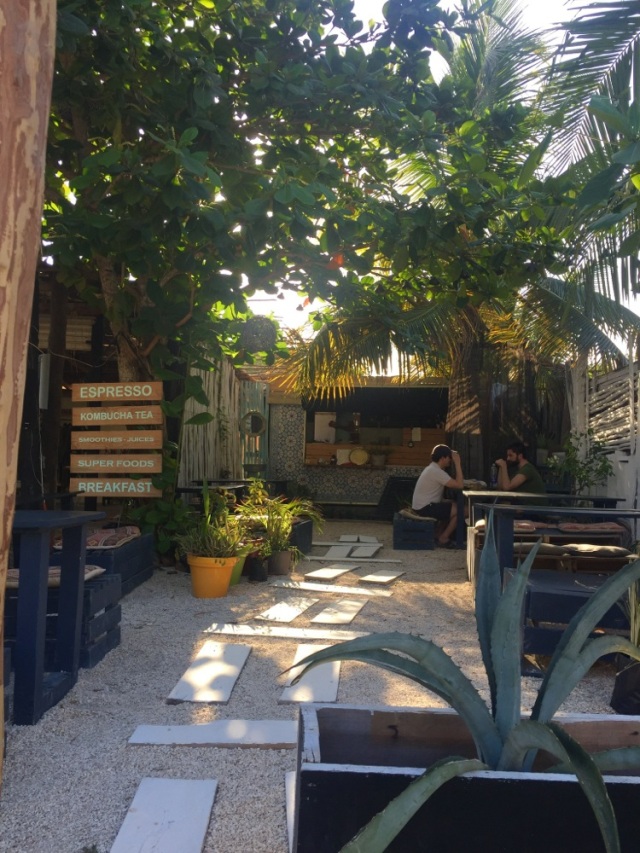 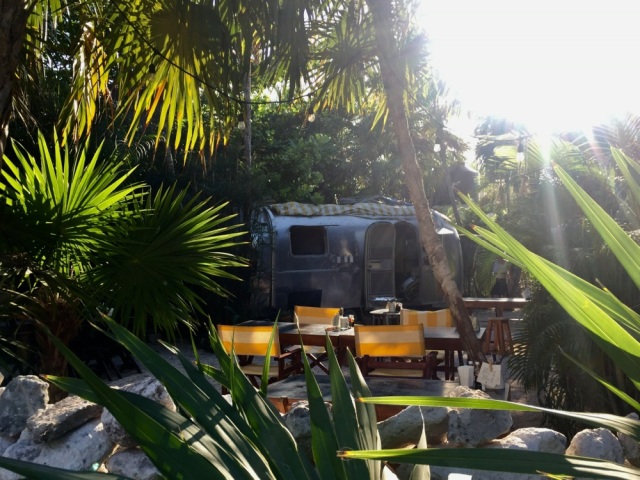 Our most special meal was at a restaurant called Kitchen Table, below, on the jungle side of the beach road. 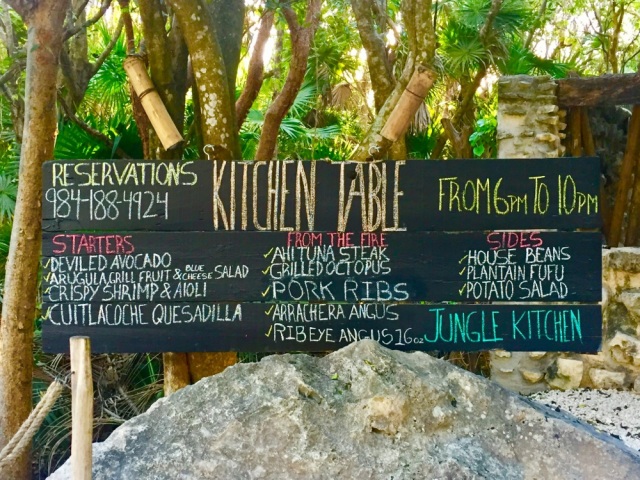 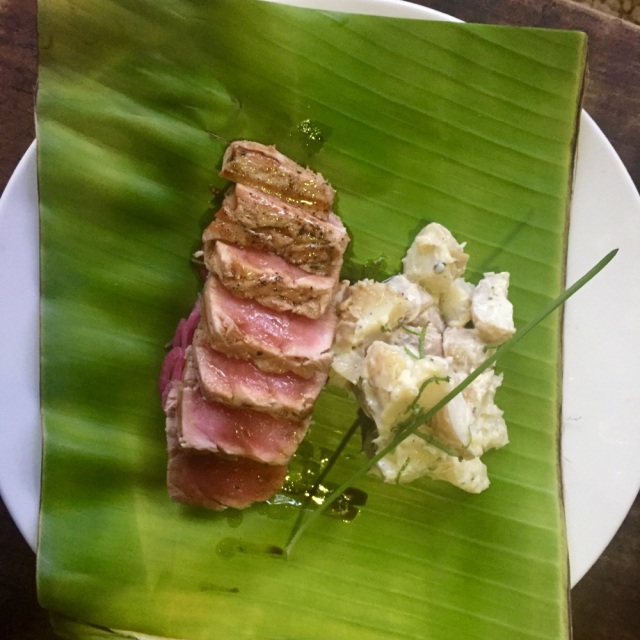 We left relaxed, satisfied, fulfilled. Yay for the Yucatan. Yay for vacations.

I blog (for fun) here at casaCARA, and write (for money) about architecture, interiors, gardens and travel for many national magazines and websites.
View all posts by cara →
This entry was posted in Mexico, TRAVEL and tagged Akumal, Mexico, Tulum. Bookmark the permalink.

6 Responses to Tough Life: A Week in the Yucatan