127 Winters Ago in Brooklyn

HAPPY NEW YEAR, devoted readers and anyone who may have landed accidentally on my humble six-year-old blog.

For my first post of 2015, here’s a small sampling of seasonally appropriate photos from the Brooklyn Historical Society’s online photo database. It’s a tremendous resource, and great fun to search when you’ve got a free evening or it’s too damn cold to go outside.

The images in this post are lantern slides, glass transparencies to be viewed through a projector (called a ‘magic lantern’) that casts the image on a wall. They were all taken by Adrian Vanderveer Martense (1852-1898), a lawyer by profession and an amateur photographer. Martense documented houses, streets, and his friends and neighbors in Flatbush, as well as momentous events like the legendary blizzard of March 1888 and the moving of the Hotel Brighton in Coney Island in April 1888. He was a member of the Brooklyn Academy of Photography and served as its first recording secretary when it was established in 1887 (it later became the Brooklyn Camera Club).

Top: Adrian Martense, center, with pinhole camera, along with two other men and a boy on a tricycle, c.1880

Martense was descended from Dutch settlers who came to Brooklyn in the 17th century. His family’s land is now part of Greenwood Cemetery. Some of the photos in this post show a rural side of 19th century Brooklyn; others were taken downtown and show buildings that still exist. Most of these were taken on March 15, 1888, when Martense evidently set out to record the aftermath of the great blizzard in several different neighborhoods. And aren’t we glad he did?

Men standing at side of stage sleigh after blizzard 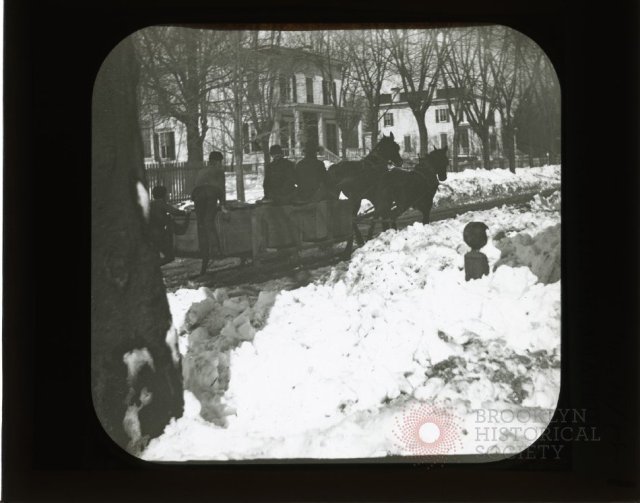 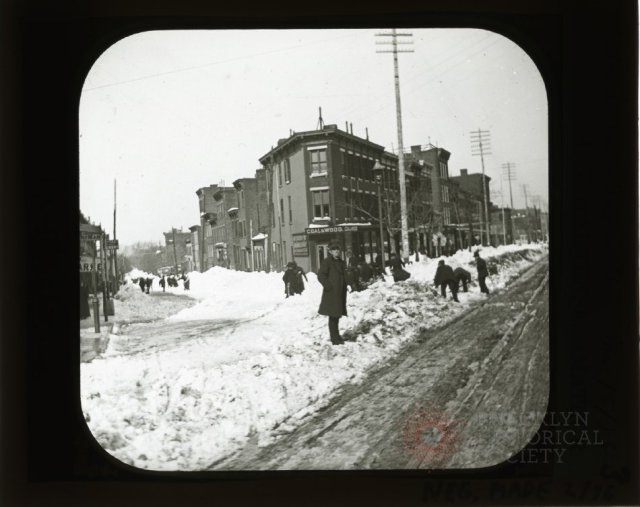 Man in front of coal and wood shop, as other men work to clear snow from the streets at Flatbush Avenue and Bergen Street 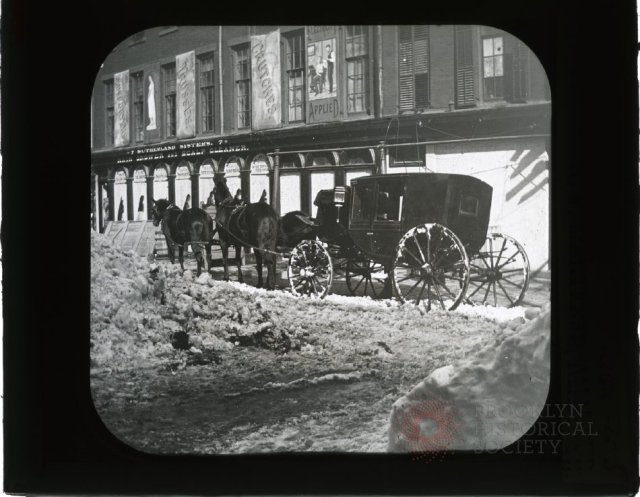 Horse-drawn carriage stopped in front of 7 Sutherland Sisters, on Clinton Avenue near the corner of Fulton Street, after the blizzard

People walking between piles of cleared snow at Atlantic Avenue and Flatbush Avenue, following the blizzard

Street car and horse-drawn carriage at Adams Street and Willoughby Street under the elevated train, with men standing on the sidewalk

This is just a tiny sample of the Brooklyn Historical Society’s Martense collection; you can see them all right here.

2 Responses to 127 Winters Ago in Brooklyn