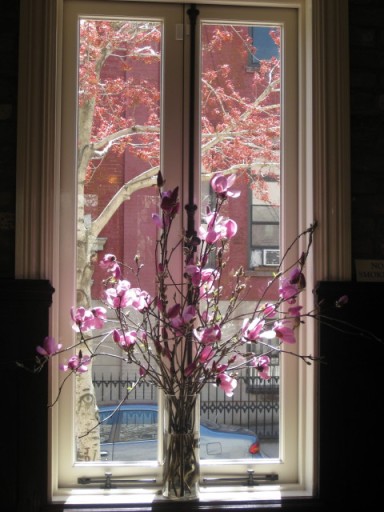 I LOVE PLAYING TOURIST in my own neighborhood. Last Sunday, the first of true spring, my friend Nancy and I strolled down to the farthest reaches of Carroll Gardens, into what was, until recently, a sketchy wasteland of mostly marginal storefronts, perilously close to the BQE.

It was always obvious that the area would one day turn. There have been inroads, like the overdone but endearing Le Petit Cafe. But in the last few months, downturn or no, the area seems to have reached some new critical mass of chic.

Why, it’s almost a neighborhood unto itself, in need of a name, bounded roughly by Clinton and Smith, 4th Place and the Brooklyn-Queens Expressway. SoCaGa (South Carroll Gardens) sounds like choking. NoReHo (North Red Hook)? DUBQE (Down Under the BQE)?

We were headed to Buttermilk Channel for brunch, or so we thought. We walked south from Dean Street on Smith, which has been pretty much over for me since Uncle Pho closed in 2002 (French-Vietnamese restaurant with the BEST vintage wallpaper and watermelon martinis).

On the corner of Smith Street and Third Place, I noticed something I’d passed a thousand times and never saw: a 1920s auto body shop, below, whose 1920s upper story has a Mediterranean tile awning, disguised behind a coat of battleship gray. 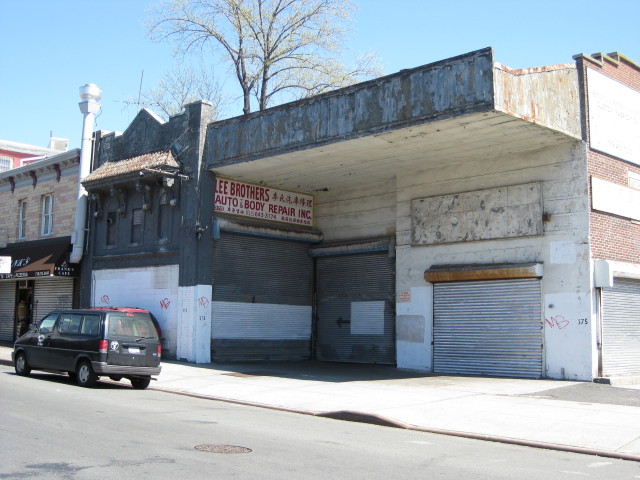 We headed up to Court and found Buttermilk Channel a madhouse of families eating Easter lunch. We put our names on the list, then checked out Store 518, a vintage-style general store full of penny candy in old showcases, on the one hand, and an outpost for fashion designer Nadia Tarr of Butter on the other.

Decided to blow off the crowd scene and happened into Prime Meats, two photos below and top, whose glossy new storefront beckoned from the corner of Court Street and 4th Place.

To sit in a wooden booth under a tin ceiling, with sunlight streaming in and a glass of dry sparkling German wine, is a delightful way to pass part of a Sunday afternoon. But we decided against eating there because they don’t have eggs on the menu and we wanted eggs.

So we headed to the old standby, Cafe Luluc, where I had my usual eggs Florentine.

On the way, I spotted two adjoining buildings, below, on Carroll, with floral motifs etched into the brownstone (rare in these parts), and a pair of unusual cornices that totally say Eastlake. 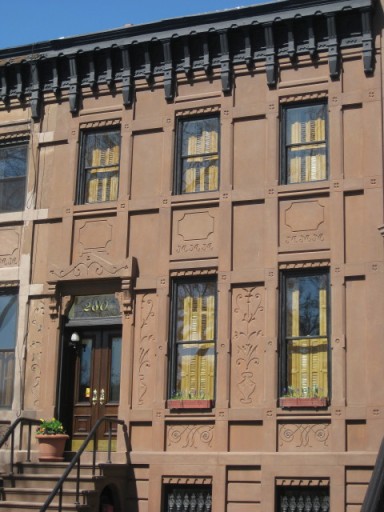 Back on Smith, I pondered the nagging question: Why aren’t there any trees? Why must Smith Street be so barren, so willfully UGLY? Why doesn’t someone DO something (merchants’ association, e.g.)? Court is by far the more attractive, mainly because of the trees.

The final, serendipitous stop of the afternoon was the Invisible Dog gallery/thrift/design shop, below. We were lured in to the Bergen Street storefront by a wooden sign against a building that, once again, despite 30  years of residence nearby, I never noticed. Turns out it’s a former factory, where a popular novelty item — the ‘Invisible Dog’ leash (you remember those) — was made. Now it’s an art gallery as well as the future location of artists’ studios and a rooftop garden, and a temporary, weekend-only store selling utilitarian items like desks, clocks, and metal objects found in this very building — all masterminded by Lucien Zayan, recently arrived from Paris, and Muriel Guepin, a former financial analyst.

What an adventure! You could do worse than follow our itinerary this coming weekend. But make a reservation at Buttermilk Channel (parties of 5 or more).

5 Responses to The NEW Carroll Gardens