A PIECE I WROTE recently about the reinvention of a postwar ranch house in Sag Harbor, N.Y., is in the August 1 issue of Hamptons Cottages & Gardens magazine. It so happens I’ve known the homeowner, Susan Penzner, who is a real estate broker in Manhattan and Long Island, for 20+ years; I had written about her Sag Harbor vintage clothing store, Havens House, for The New York Times in 1992. This assignment brought us together again.

Along with Jack Ceglic, a local, much-published industrial and architectural designer, she masterminded the total overhaul of a drab, closed-in, and, for lack of a better word, yucky (believe me — I saw the ‘before’ pictures) 1960s ranch into an airy, loft-like space that graciously makes room for both classic modern furnishings and a few hold-overs from Susan’s “antiques” period.

To read the whole story, and see more images of the house and garden, go here.

MANY OF THE HOUSES THAT SIT FORLORNLY ON THE MARKET for months around here are 1970s ranches. I generally look past them with a shudder. Sometimes, though, they’re well-located, and they’re usually priced at the bottom of the market (400s or thereabouts).

Now comes a feature on Rural Intelligence, the lifestyle blogazine of the Hudson Valley, that has me re-thinking my scorn for the ranch. There’s an interview with James Crisp, a Millbrook, N.Y.-based architect who is capable of taking dreary ranches from tacky to tasty. He’s the design force behind a new TV series called Blog Cabin, in which just such a Catskills house (see the “before,” top) is transformed over the course of a six-part series beginning tonight, Aug. 19, on the DIY network.

I have very little patience for the forced enthusiasm, frenetic pace, and overall dumbness of the home-improvement shows and probably won’t watch it. Nor am I totally sold on the “after” pic, above. But I am intrigued by the questions Rural Intelligence posed, and Crisp’s answers. Here’s an excerpt:

RI: How do you fix what’s fundamentally wrong with a house like this?

JC:  The problem with ranches is they tend to look like doublewides. We needed something to break up that long, low roofline. So we raised the roof of the center portion, which allowed us to gain some ceiling height in the living room. We then raised the ceiling up to the underside of the rafters. We changed the entrance, relocated the fireplace to an interior wall. Originally, it had been on an exterior wall, where it blocked the view.

JC: With ranches, you tend to get an overabundance of sheetrock inside. What’s lacking is detail. So on another project unrelated to the show (“before,” above), we made some very simple changes that made a huge difference in the living room: we added some very simple paneling, an applied grid, to the fireplace wall, and put in some built-in shelving. But the biggest difference was even less expensive: we painted the wood ceiling white. We also upgraded the fire surround with slate and changed the lighting. And that’s it: we made no architectural changes at all, yet it looks completely different. (See the “after,” below.)

To read the entire interview, go here. And count on me posting more ranches for sale in future, if they’ve got location to recommend them and the price is right.

One of my favorite magazines bit the dust with its December 2008 issue.  Cottage Living, launched with fanfare in 2004, is gone.

I don’t think I ever missed an issue, though in recent months — probably in a desperate grab for advertising dollars — the cottages had grown bigger and fancier and hardly deserved the name (can a 4BR house be called a ‘cottage’?)

What I loved most about the magazine were the ‘before and afters,’ makeovers of decrepit vintage homes.  I spent happy hours poring over the remodeling of California bungalows, log cabins in Virginia, freedman’s cottages in Charleston, S.C.

But those were easy clean-ups: charm, however soiled, begets charm. 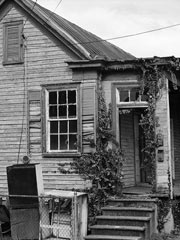 Left and right: Unique to Charleston, ‘freedman’s cottages’ were built by and for freed slaves after the Civil War.  They were  two rooms deep and one room wide, with a side porch the length of the house.

The magazine also had an architect, Hoyte Johnson, take on the tricky business of suggesting fix-ups (in renderings, not reality) for dank 1960s ranches, boring brick boxes, and asbestos-shingled, aluminum-windowed 1940s American four-squares.

These were not always successful; in my view, they went a little too far “adding personality” in the form of pergolas, sundials, weathervanes, chimneypots, etc. (there’s a Yiddish word for that, but I don’t know how to spell it).

But these were fun to contemplate, and I learned a lot about balancing awkward proportions by shifting placement of windows and doors, and the usefulness of shutters to enlarge the look of meager windows.  And I totally agree that single-pane windows look ’empty and sad,’ and that replacing them with divided-light windows — real ones — has a dramatically positive aesthetic effect on the facade of any old house.

Left and below: Would you believe this is the same house? They took a dull brick ranch and clad it in board-and-batten siding; the asphalt shingle roof was replaced with a higher-pitched tin roof, and the ceilings were raised inside.

Cottage Living, I’ll miss you. (The publisher, Southern Living, offered to replace the remainder of my subscription with Real Simple, probably my LEAST favorite magazine — obvious, repetitive advice on how to spend more money in a quest to live more simply — but that one’s still publishing, so what do I know?)

In the meantime, there are some copies of Cottage Makeovers, the final “special edition” ($10.99, no ads) compiling 20 makeovers from the defunct magazine, on newsstand shelves.  I say, get it while you can.