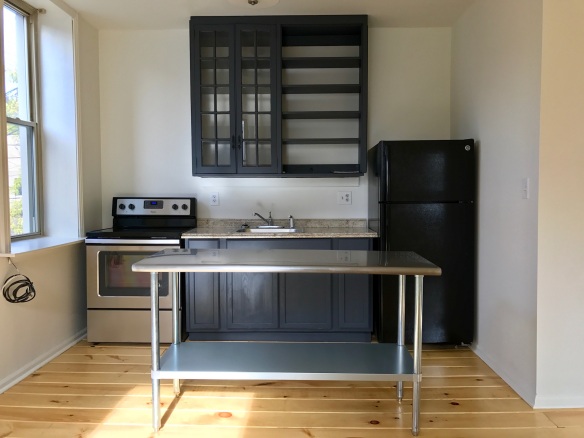 ONE OF THE BEST PIECES of self-help advice I ever read in a magazine was: “Savor your accomplishments.” Ridiculous that I had to read it in a magazine, but I did, and I took it to heart.

Here we are in deepest winter, and I’m savoring. There aren’t any laurels handy, so I’m resting on my couch in Brooklyn, pleased that I managed to sneak in a second Philadelphia apartment renovation in 2017. It’s in the same three-unit Queen Village building where I created a duplex at the top of the house, combining unused attic space with the one-bedroom apartment beneath it, early last year.

That first reno, which began in late ’16 and took six months, was long-planned. In fact, I’d wanted to do it since I bought the building in 2005.

This second reno, begun in September, finished in November and rented in December, was completely unplanned. But it became necessary after the hot water heater in the second-floor unit burst one midsummer’s night. It completely ruined the floors of that apartment — no great loss, as they were cheap carpet over plywood, but it also pointed up the need to re-do the whole place, which was super-shabby and not at all chic, and hadn’t been touched since the 1980s.

The flood also messed up the ceiling of the unit below, on the ground floor. The repair of that was covered by insurance, but the stress of the whole thing, for both tenants affected and also for me, was one of those times when being a landlord seems pretty dreadful.

However, it ended well. The downstairs tenant was a trooper and put up with the weeks-long repair work and painting in her bedroom and bath. The tenant on the second floor, who had been there for about ten years, found a new place quickly. And the results were worth it.

I used the same contractor and many of the same sources and materials as for the previous reno. There was one big design move: removing the wall between the former kitchen and the living room, which had made the living room feel very narrow. 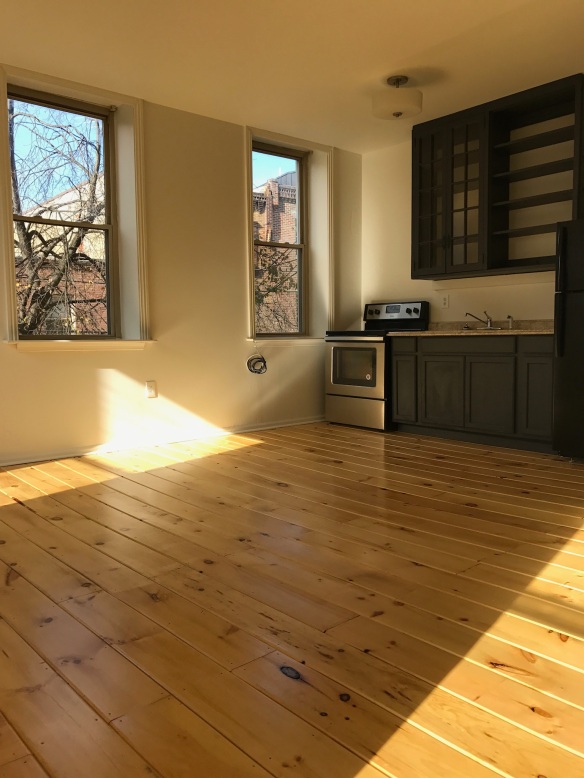 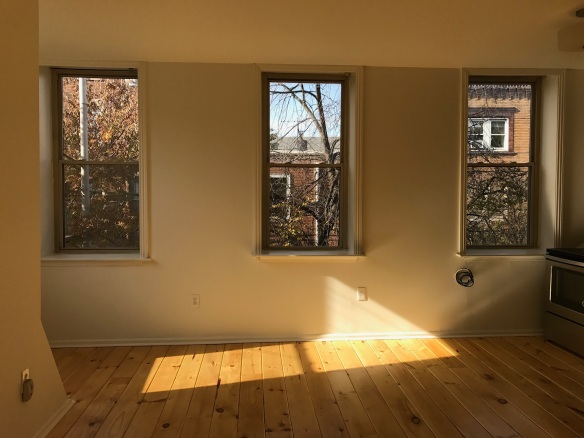 The floors are Lumber Liquidators’ cheapest. Yellow pine, $2 and change per square foot. Almost all their flooring is manufactured and pre-finished. This is what I wanted: actual wood.

For upper storage, I used a vintage wood/glass-door cabinet from Beaty American, a terrific architectural salvage store in Kensington. 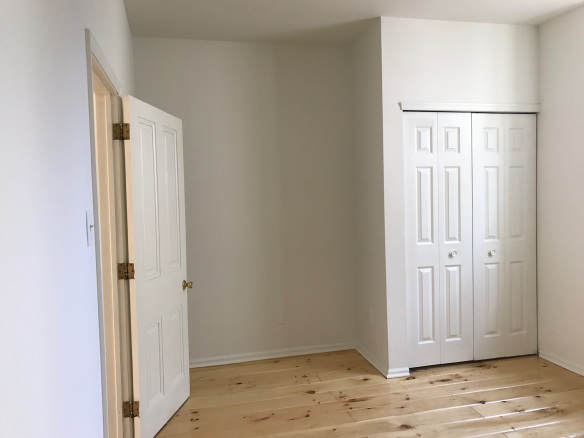 The bedroom has a closet with a washer dryer and a walk-in closet on the opposite wall.

The new pedestal sink is from Lowe’s and the floor is black commercial-grade vinyl.

Below, a couple of ‘Befores’ for context:

IN CASE ANYONE HAS BEEN WONDERING, the Philadelphia renovation in a c.1810 row house that commanded much of my attention and most of my resources last winter was finally finished in May. I’m very pleased with how it turned out. In fact, the result was so satisfying I’m starting a new renovation in the same three-unit building next month, in the second-floor apartment below.

Joke! I am starting a new reno in the same building next month, but not because the first one was satisfying. It’s because there was a watery disaster in that second-floor apartment about a month ago: a burst hot water heater that let loose all 40 gallons of its contents, ruining the carpeted floor and finding its way through to the ceiling of the apartment on the ground floor below, causing extensive damage there as well.

The ceiling damage downstairs has been repaired, but I’ve asked the tenant in the second-floor apartment to vacate in late August. It’s the last un-renovated apartment of the three, and was sorely in need of upgrading anyway. I’m excited about the opportunity to fix a major design flaw in that space (there’s no proper living room to speak of).

But before we get to that in months to come, I want to share, for the record, photos of the completed duplex, which combined an existing one-bedroom apartment on the building’s third floor with previously unused attic space, to create a bi-level apartment with two bedrooms and an additional open loft.

At the center of it all is a new handcrafted staircase, which I consider very successful in both design and execution.

The pine floors are new; the bathroom is brand new; the kitchen cabinets received a cosmetic upgrade. There was no electricity on the upper level; now there is. The original wood floors upstairs were painted white.

Downstairs, the door to the bedroom was moved to allow a longer sight line through the apartment. Add to that new windows, new moldings, bumped-up electrical service, new HVAC units and a paint job. All in all, a major accomplishment <blowing on fingernails and buffing them against shoulder>.

Most telling of all: the apartment rented very quickly, to the first people who looked at it. 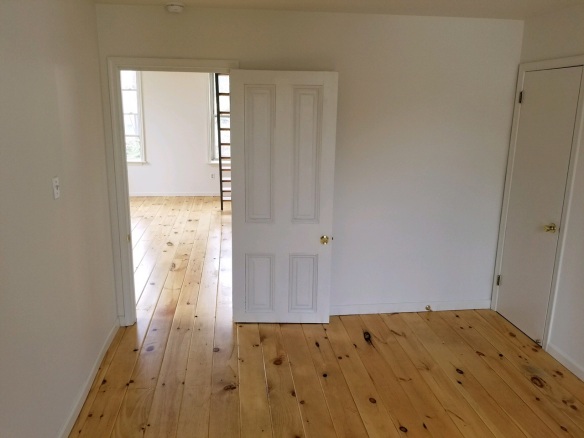 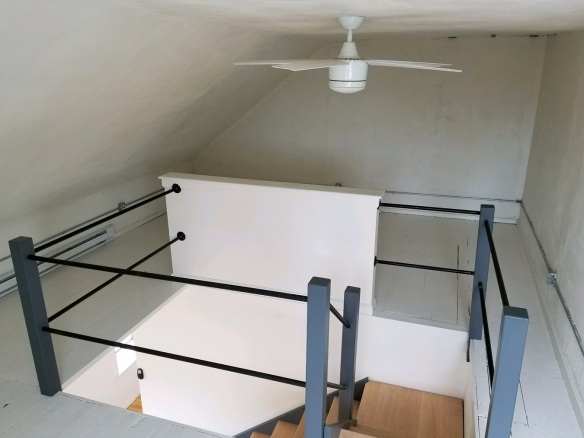 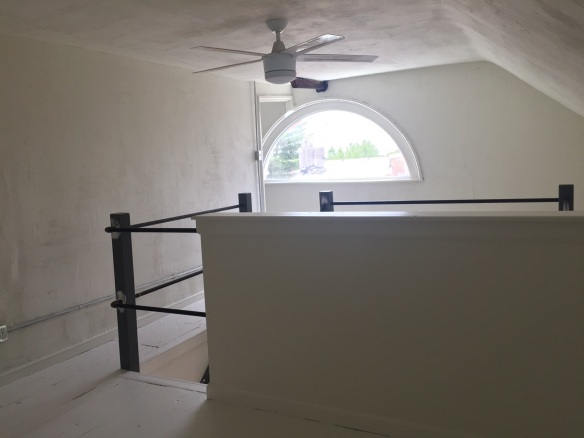 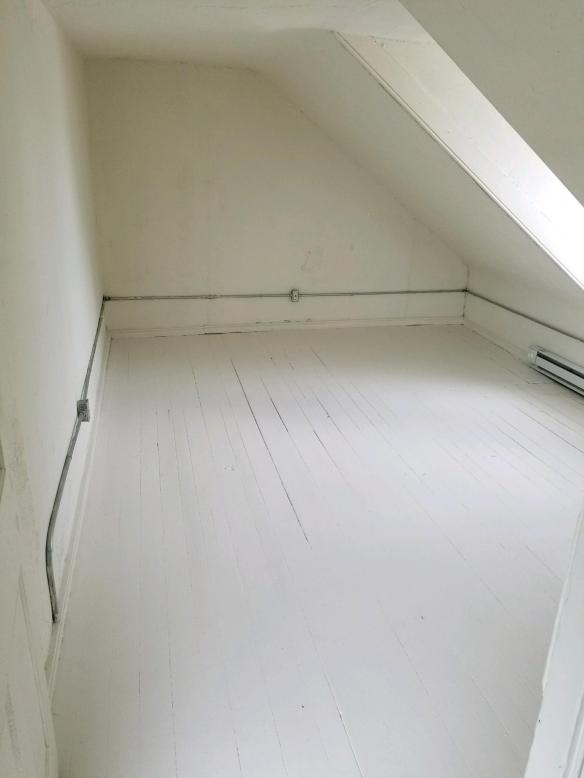 NOW THAT YOU’RE ALL FIRED UP about Philadelphia from reading my last few blog posts, perhaps you’re ready to go live there? Or know someone who is? (If so, please pass this on.)

Because I happen to have an apartment for rent, starting January 1, in Queen Village, the beautiful, civilized, convenient neighborhood I came to know and love while spending time in Philly recently. (This is not the apartment I’m in the process of renovating, by the way; that’s on the top floor of the same building. That’s a two-bedroom, and will be ready in mid-winter.)

The apartment available January 1 is a one-bedroom of 650 square feet, on the ground floor of an 1810 building that was once the parsonage of the church next door (which is now co-ops, with a lovely planted courtyard in front).

It has its own entrance (red door on left, top) and, rare in Philly, a huge private backyard.

The rent is $1,300/month, plus utilities. Scroll down to the bottom of this post for my no-frills craigslist copy with a bit more info.

For more details, photos, or to schedule a viewing, please contact me at caramia447 [at] gmail [dot] com.

Dining area with ceramic tile floor,  adjacent to kitchen at front of apartment.

Living room at front of apartment, coat closet at rear. Wood floors throughout. 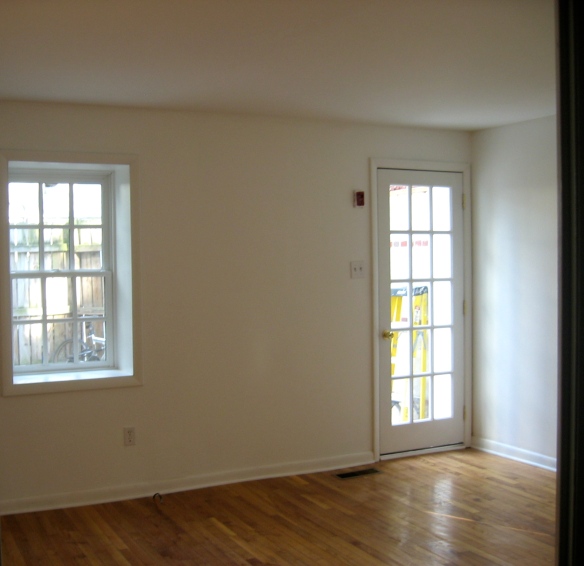 Three views of large bedroom at rear of apartment overlooking gardens at back and side. Built-in bookshelves, walk-in closet. 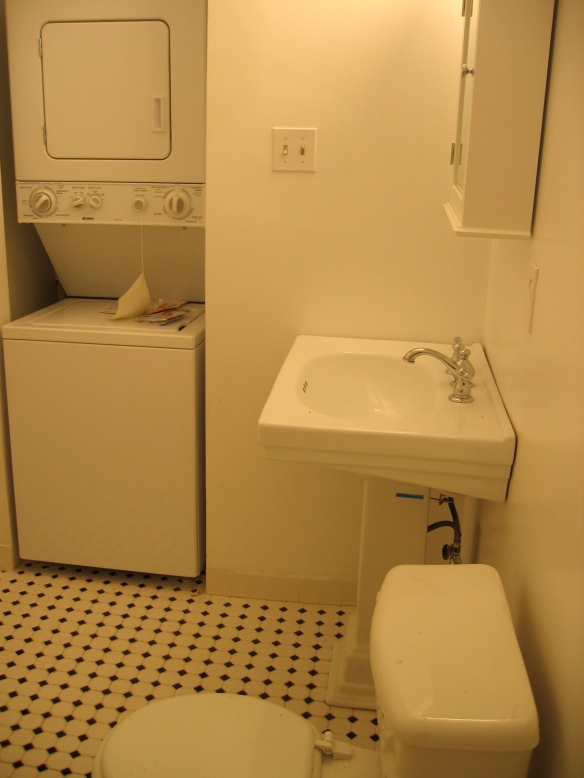 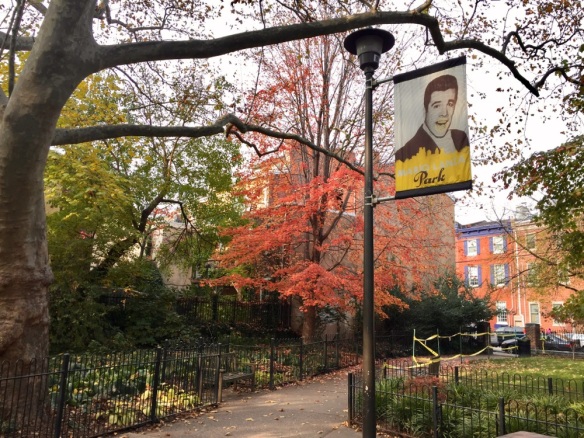 Some fine print from my Craigslist ad:

Once again: for more details, photos, or to schedule a viewing, please contact me at caramia447 [at] gmail [dot] com. Thanks!

WAITING FOR MEN… that’s how I spent much of the past week, camped out in a vacant apartment in Philadelphia, planning a renovation there (I own two 19th century row houses in Philly).

In between appointments with contractors, the appliance repair guy, the HVAC guy and 1-800 GOT JUNK, I made forays to the hardware store or in search of a meal, and each time took a different route.

I saw houses like the yellow-shuttered charmer, below and top, on Queen Street in Queen Village, with all the Colonial hallmarks: dormer window, fanlight over the door, steeply pitched roof and brick set in Flemish bond.

The wood frame house, below, a rarity in Philadelphia (most of them burned long ago), was new to me. 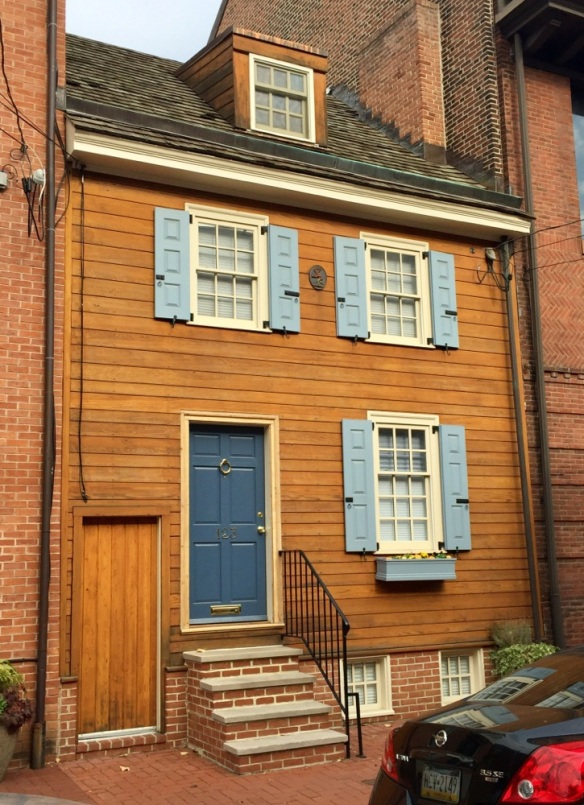 I passed through serene Mario Lanza Park, below (named for the beloved opera singer who grew up nearby). I hadn’t been there in some time, and was relieved to find that one of my favorite Philadelphia murals, featuring a large weeping willow, is still there on the side wall of a building.

From there I made my way to Gloria Dei, or Old Swedes’ Church, and its peaceful churchyard (if you allow the roar of I-95 to become a sort of celestial hum).

Built 1698-1700 by Swedish settlers, it’s the oldest church building in Pennsylvania and among the oldest in the country. Its architecture and interior are very plain, much to my liking.

I had to see the Sparks Shot Tower, below, at Front and Carpenter Streets. It’s not a smokestack; it was built to make ammunition for the War of 1812 (they cooled molten balls of metal by dropping them from the top). It’s still there, to no purpose (but historic).

Since my reno is starting soon, I had to move out of the vacant apartment myself yesterday (just as well, since my air mattress was starting to need topping up at least once in the middle of each night).

A friend from England had asked me to photograph a painting at the Philadelphia Museum of Art, below, so that’s where I found myself on my final afternoon in town, taking in the fabulous Paint the Revolution: Mexican Modernism 1910-1950 exhibition that’s on until January 8. 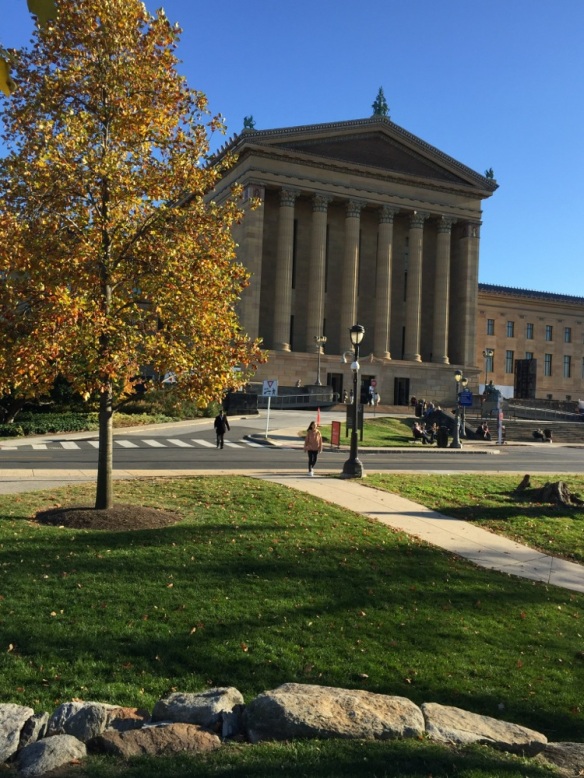 My Philadelphia story is not over. I’ll be returning frequently over the next few weeks to check on the progress of this renovation, which will turn a one-bedroom apartment into a duplex, incorporating space at the top of the house that has been sealed off for decades.

I’VE JUST SPENT three days in Philadelphia, where I camped out in a vacant apartment on an air mattress in a building I own in Queen Village, a made-up 1970s name for the neighborhood along the Delaware River, just south of South Street.

Before real estate folks came up with Queen Village, it was called Southwark by English settlers. It’s the oldest neighborhood in Philadelphia (and surely one of the oldest in the country, come to that), settled originally by Swedes in the late 17th century.

In the 18th and 19th, the riverfront — access to which is now compromised by I-95 and the multi-lane Columbus Boulevard — was all piers and warehouses, and the small row houses were occupied mostly by the families of people employed in the shipping trades.

I walked the atmospheric streets, narrow and cobbled, observing the 200+-year-old row houses, enjoying their individual quirks and how their owners have restored them.

Colorful paint jobs and sidewalk greenery characterize the properties, and there’s no shortage of seasonal décor like chrysanthemums, pumpkins and corn stalks. People even put café tables and chairs out on their 24 inches of sidewalk (secured with discreet chains).

I took special note of dormer and fanlight windows, each of which I hope to restore in my own 1810 building nearby (which will be the subject of other blog posts as I move forward with the project).

Note shutters, dormer windows, fanlights over doors, all typical of the area’s architecture.

These photos were taken mostly on Front Street, Second Street and the narrow lanes and alleys in between. I took no notes and couldn’t easily find these particular buildings again, but I’ve captioned what I can identify.

If you want to read more about Southwark’s history and architecture, go here.

Top, a glimpse through an iron gate into a cobbled courtyard on Second Street. 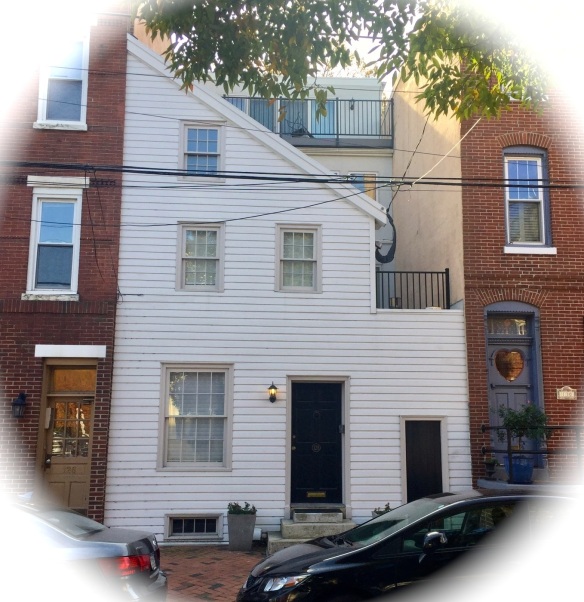 Don’t know quite what to make of this clapboard house, above. Looks like the left half may have been removed somewhere along the line. 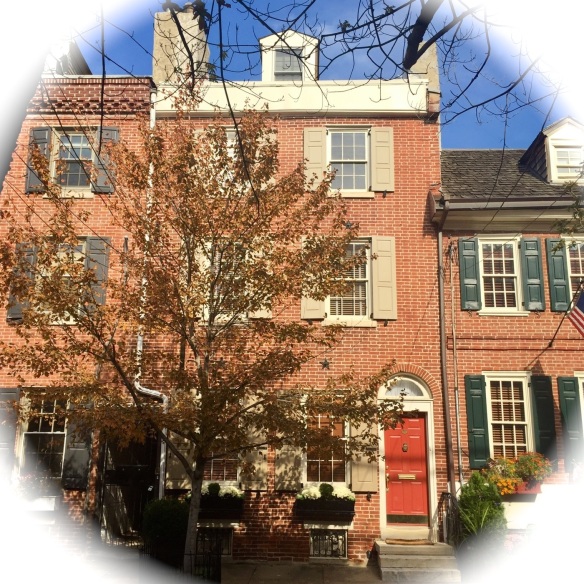 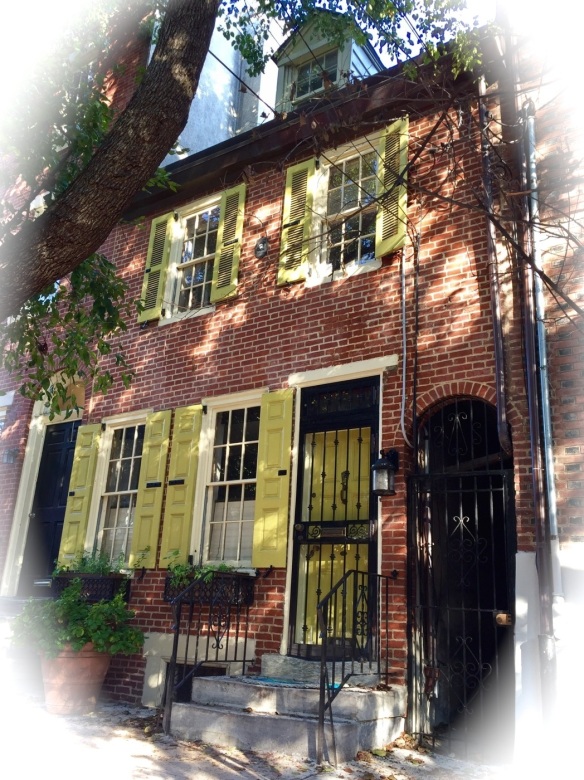 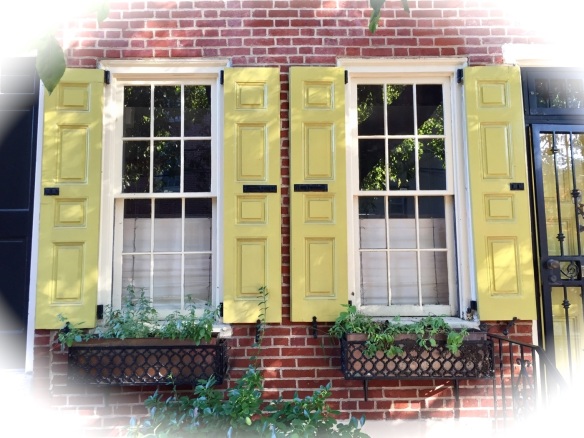 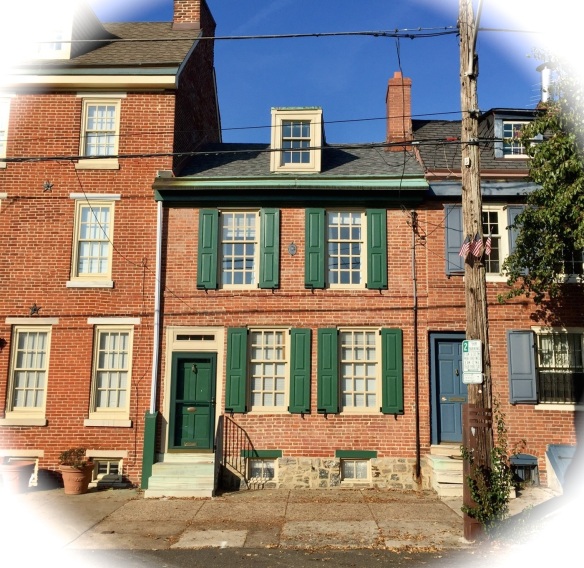 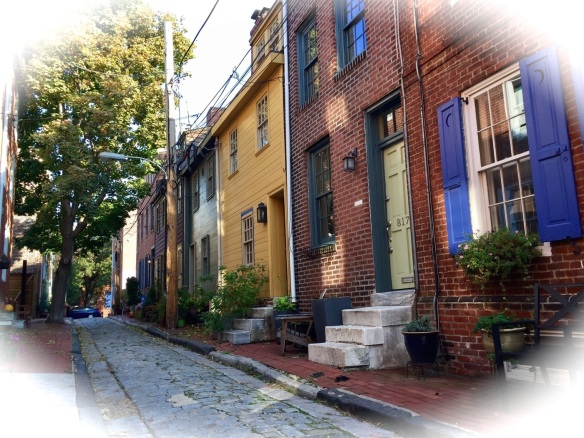 Above, along with a few photos of clapboard houses below, is the particularly charming South Hancock Street, between Christian and Catherine Streets. 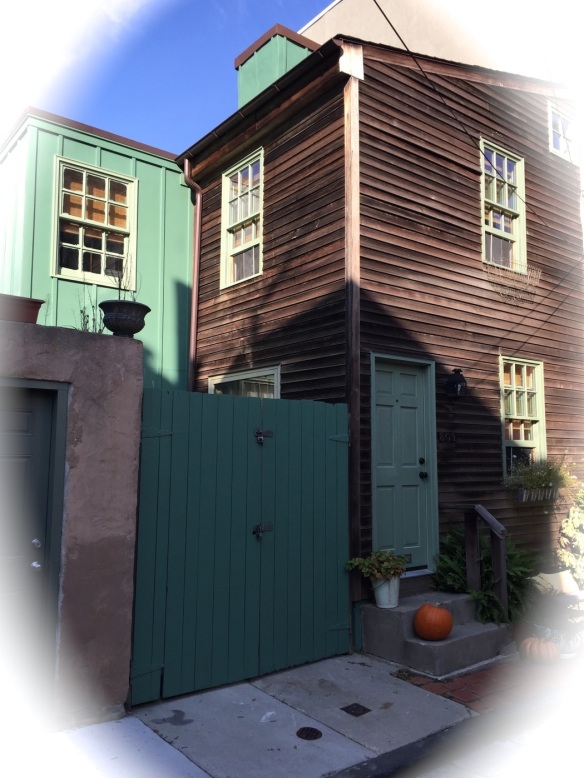 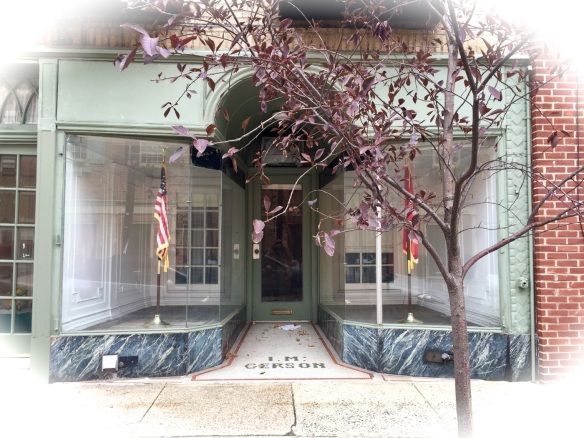 Back on Second Street, above, an intact vintage storefront of the early 20th century.

Above, the c. 1762 William Spafford House at the corner of Front and Bainbridge, a Georgian gem apparently still on the market after several years.

A fine and famous Front Street row, above: Workman Place, which has another group of small rental properties in a courtyard behind it. The dates give in my guidebook are “1748, 1812.” I honestly don’t know whether the facades above are the former or the latter. Any illuminating thoughts?

Below, the reason for the development of Southwark in the first place: the Delaware River, spanned by the Benjamin Franklin bridge, which opened in 1926.

The tall four-masted ship, built in Scotland in 1904, houses a restaurant called Moshulu. According to its website, it’s “the oldest and largest square rigged sailing vessel still afloat” and “the one and only restaurant venue on a tall ship today in the world.”