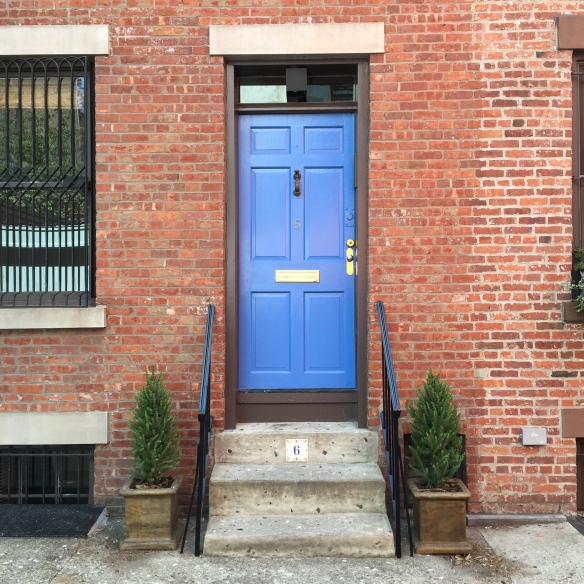 ASK MY KIDS, they’ll tell you: Cobble Hill, Brooklyn, is a great place to grow up. Especially on Verandah Place, the most coveted block in perhaps the most charming neighborhood in brownstone Brooklyn. It’s a row of mid-19th century brick carriage and mews houses, with a vest-pocket park right across the street and a highly regarded public elementary school two blocks away. Never was there a better street for skateboarding or jumping rope; car traffic is minimal. The river, the harbor and Brooklyn Bridge Park are a few blocks away; so are the best Middle Eastern and Italian groceries you’ll find in NYC.

And how often does a four-story, five bedroom, three bath townhouse with a great garden come up for rent on Verandah Place, especially one that’s just undergone a two-month spiffing up from top to bottom? Not often, let me tell you. If I could afford it, I’d live there myself (and did, for 20 years), but right now, it’s for rent, with a long lease possible.

Live there, work there — the garden level would lend itself beautifully to use as a studio or professional office, or as a guest suite, play or media room.

The entire house is freshly painted, with newly refinished floors. The kitchen has custom cabinets, honed granite countertop, Sub-Zero fridge and Viking stove next to a large dining room with wood-burning fireplace.

But why take my word for it? Have a look at my many photos, below. The official listing is here. Check out the professional photos on the realtor’s site (especially if you want to see the park across the street), or contact me at caramia447 (at) gmail (dot) com for further details.

P.S. Scroll all the way down to read some quirky factoids I’ve pulled together about Six Verandah Place and its location. 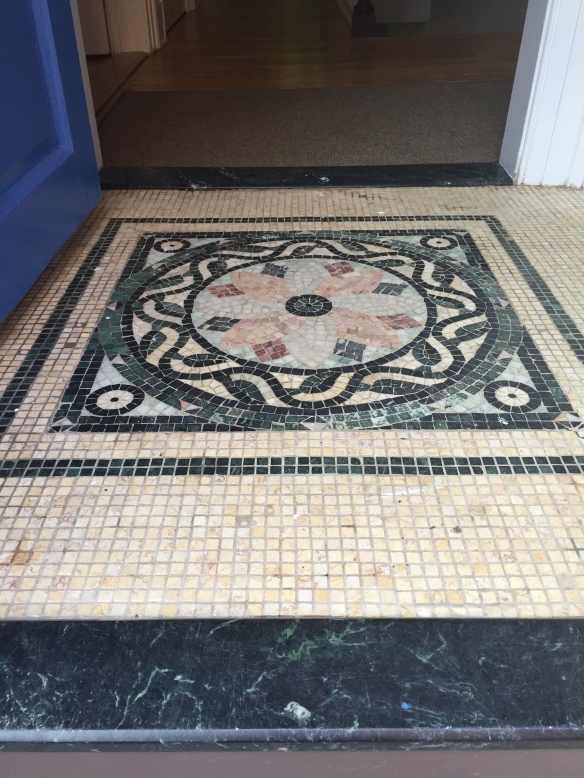 Parlor floor entry. Stairs go down to studio/garden level. Library/den to left, formal parlor ahead to left, beyond classical columns. 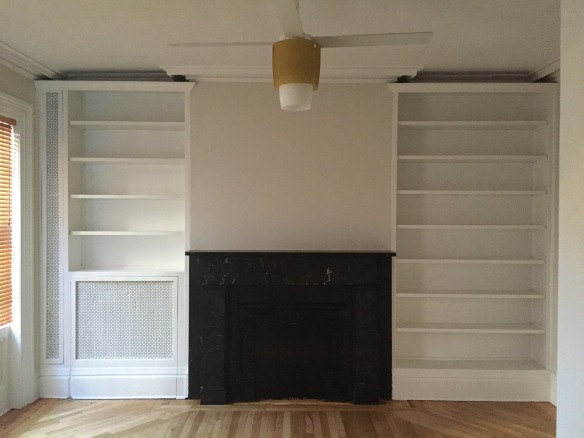 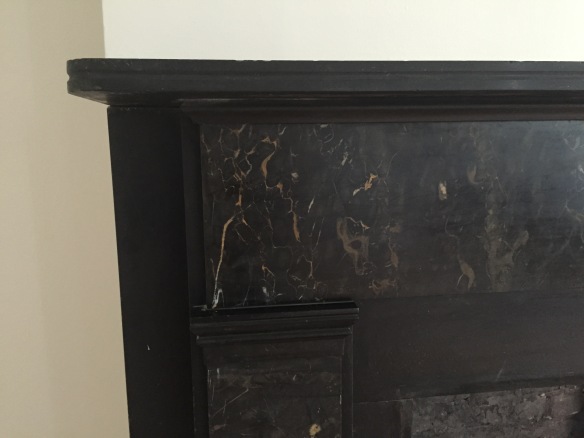 Come on in to parlor/living room. Door straight ahead leads to wrought iron balcony down to garden. 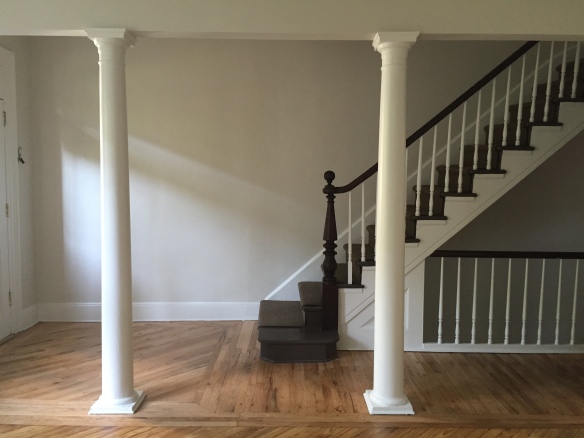 Major gap here: The photos above show just two angles on a 15’x22′ room with a marble mantel and two six-over-six windows overlooking the garden. Now up we go to the second floor… 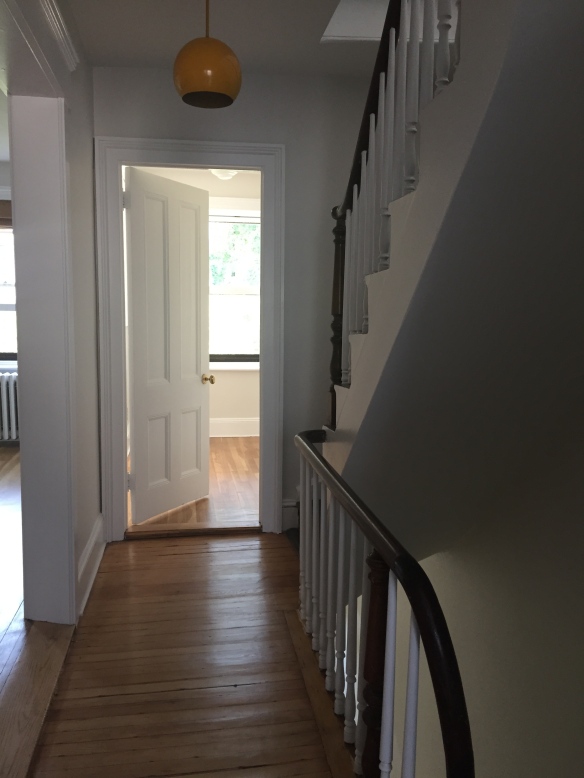 Room straight ahead can be used as study or small bedroom. Overlooks garden. I wrote many a magazine article there.

View from dining room into hallway. Staircase, of course, original. 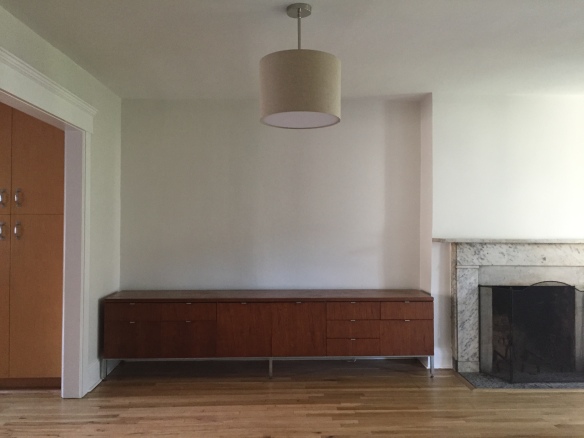 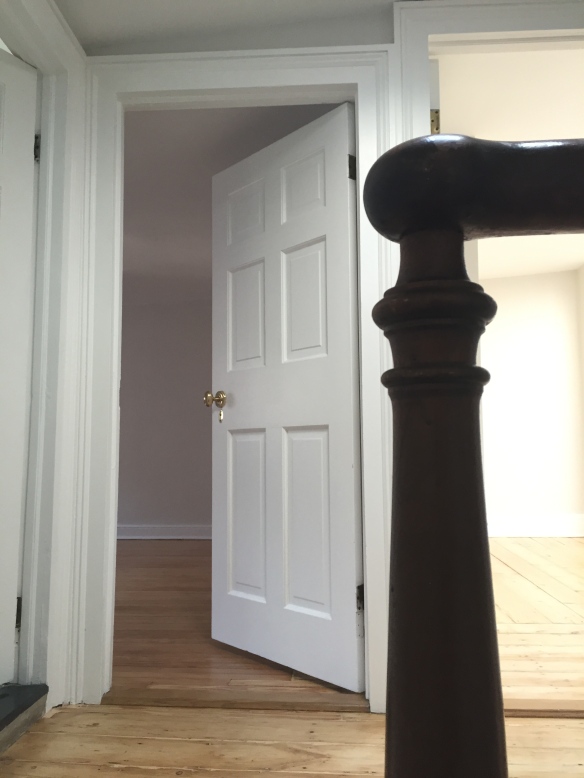 Coming up to top floor landing… 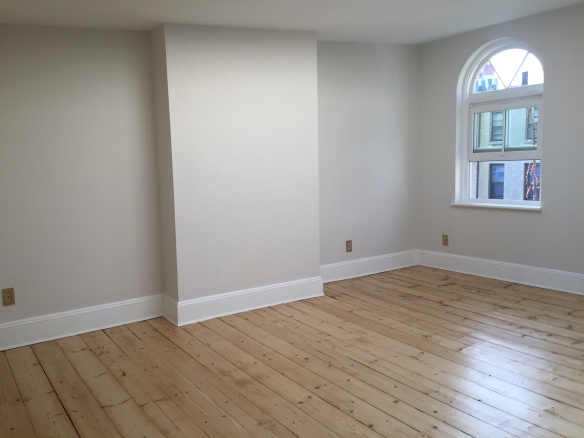 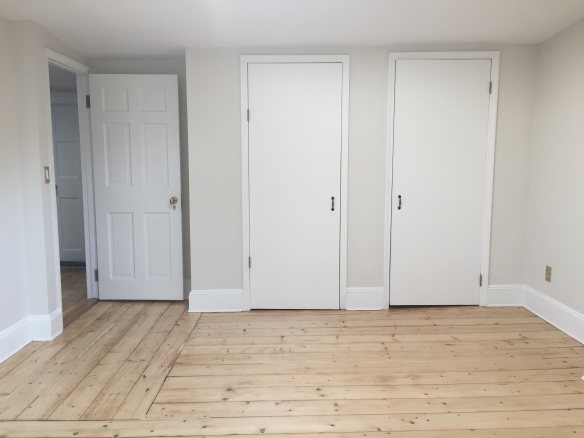 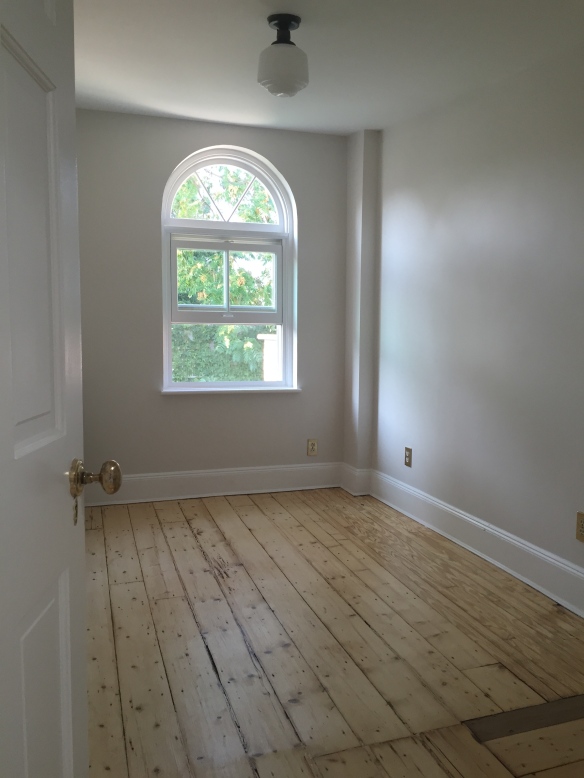 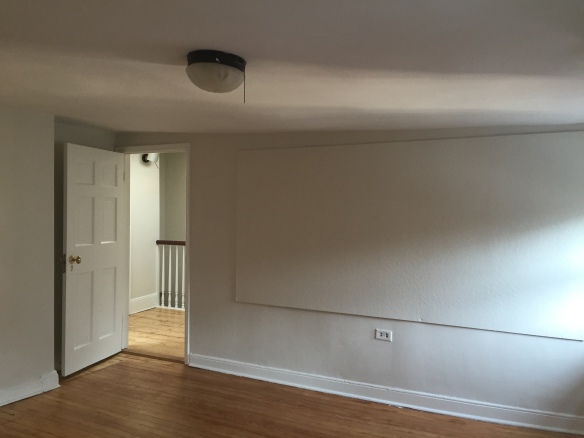 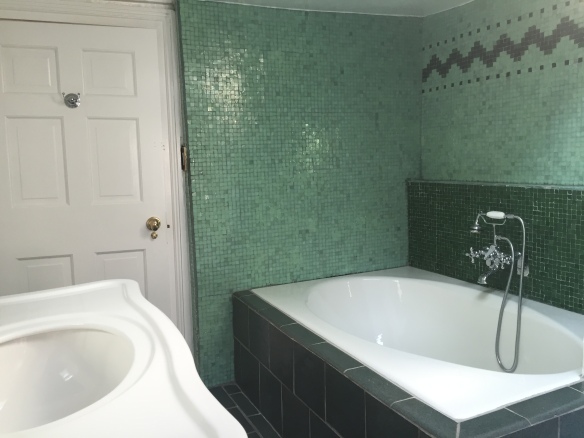 Oh, wait! There’s another whole floor downstairs, on the garden level… and a full storage basement below that. 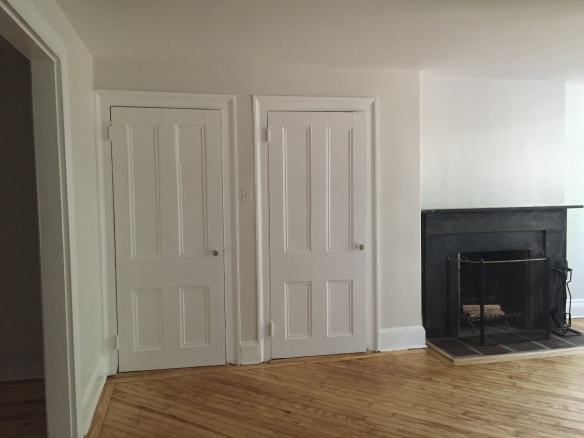 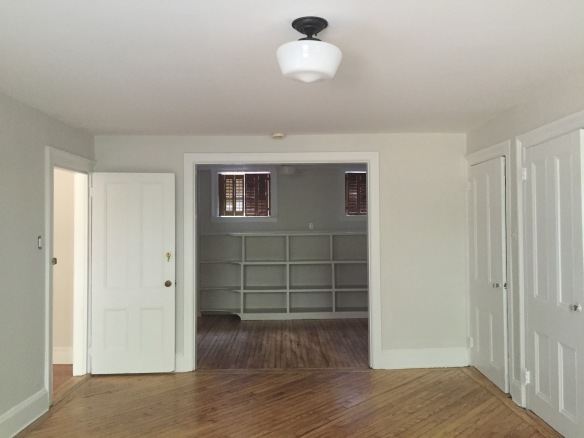 THE LORE OF SIX VERANDAH PLACE

KNOW ANYBODY WHO WANTS TO RENT a 5BR, 3 BATH TOWNHOUSE in Cobble Hill? A truly special four-story house, on a coveted park block, with great light, two working fireplaces, a high-end kitchen, wood floors, lots of original detail, and a delightful garden? 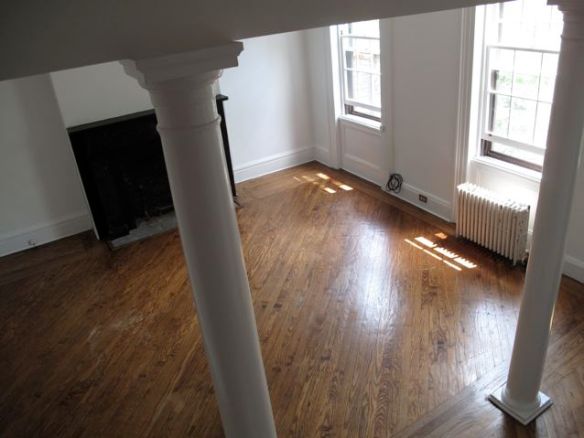 That would be mine. It’s been vacant for two whole weeks, and I’m getting nervous.

Sure, I was smug a few months back, sitting pretty with my rental property 100% occupied, crowing about the strength of the rental market. That was when I thought I could, as usual, segue easily from tenant to tenant. That was before this damn recession affected me personally.

I even had the nerve to start a blog subtitled “Old Houses for Fun and Profit.” Well, forget the profit. With the Cobble Hill house unrented, my monthly income is suddenly halved, and there’s no fun in that, either.

I thought I was doing everything possible to rent the place, listing it with several brokers and painting the house top to bottom. But I haven’t tried blogging about it until now.

So: if you are (or know someone who is) a large, solvent family in need of an extraordinary dwelling in a prime Brooklyn neighborhood to the tune of $8,000/month — a lot of money, granted, but it’s also a lot of house — e-mail caramia447@gmail.com without delay, and save a hefty broker’s fee. 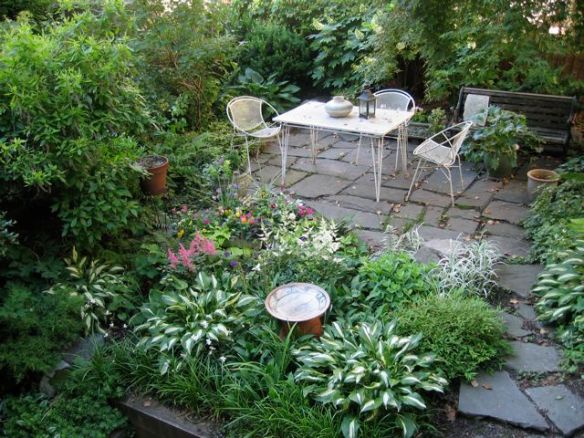 THE LORE OF VERANDAH PLACE

A few quirky tidbits about the house and its location: