ABOUT A WEEK AGO, I PLANTED UP the two boxes attached to the front windows of my garden-level apartment in Prospect Heights, Brooklyn, and I’m pleased with how they turned out.

I had planned to shop a local plant sale, but couldn’t wait: I ended up going to Lowe’s “just to see” what they had, and buying everything I needed there, a monochrome mix (white flowers only) of perennials and annuals.

The centerpiece of each box is a plant I’d never seen before: Juncus effusus or ‘Big Twister Rush,’ a perennial ornamental grass with some straight shoots and some corkscrew ones. They’re real eye-catchers. Here’s what else is in each box:

That’s it, except for stuffing a white impatiens into one corner that looked empty. The pansies will last until July or so (they’re cool-season annuals), and then I’ll replace them with something else. I re-used the old potting soil that was in the boxes, topped up with some fresh, and mulched everything after planting to keep things moist. They’ll need daily watering when it gets hot, and I admit to using a weak solution of Miracle-Gro in my city containers. 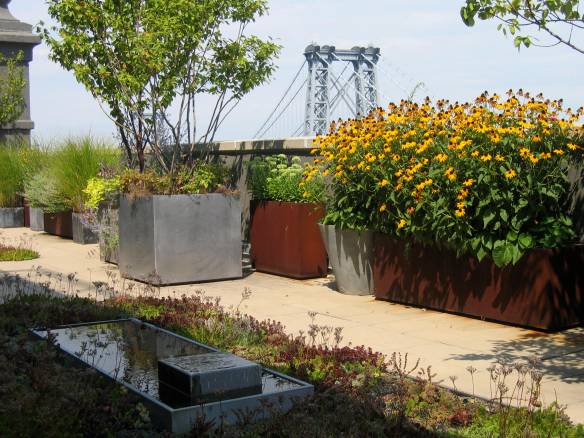 So, if you happen to have a 4,600 square foot rooftop terrace like the one above and below, atop a factory converted to living lofts in Williamsburg, Brooklyn — come September, you can have your own prairie meadow, ablaze with golden rudbeckia (black-eyed Susans).

Rebecca Cole, the garden designer, created the look of natural landscaping, with metal cubes containing birch trees and grasses, ‘carpets’ of sedum, and lots of annual color. She carefully planned the placement of containers to break up the vast space into functional areas, and considered the view from indoors. 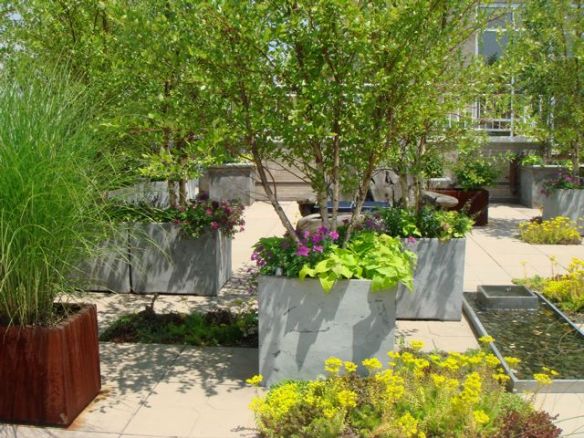 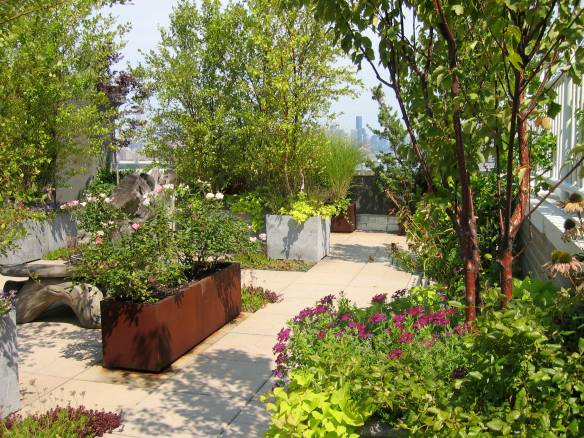 On the Greenwich Village terrace, below, also by Rebecca Cole, a Japanese maple thrives, along with a lush array of evergreens and perennials, many with chartreuse foliage. 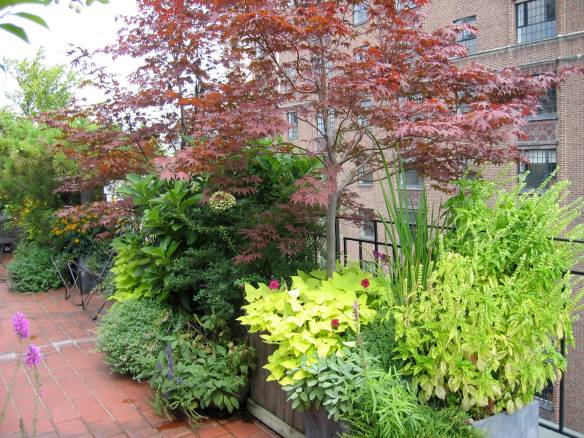 Now for something a little more attainable. First, a couple of humble containers from my own past, and what made me happy about them:

The yellow-tipped hosta in a terra cotta pot, below at left, couldn’t be easier or more reliable. The five orange lilies at right were a free bonus with a plant order. They were stuck in a clay pot and forgotten, except for the few weeks each summer when they would reappear, vigor undiminished. 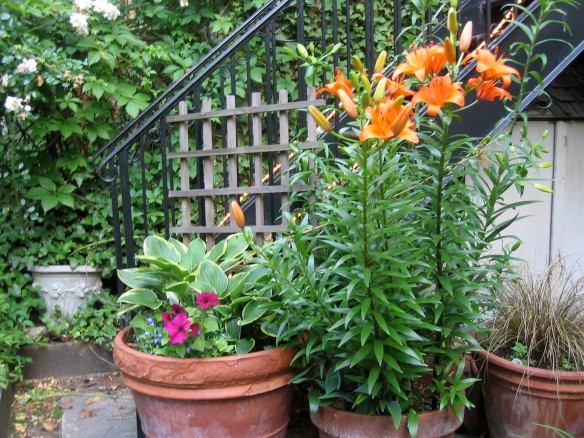 The perennial dianthus (mini-carnations), below, from a farmers market, were a complete surprise. How well they bloomed had, I think, something to do with the piece of salvaged mirror I placed along the wall behind them. A south-facing wall to begin with, the extra reflected light seemed to enhance and prolong their bloom, which lasted for many weeks. 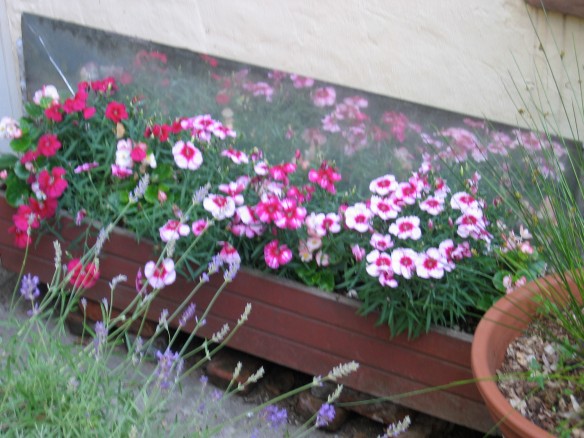 Another bargain in a pot, below: coleus and impatiens stuck in a shady, bare space among hostas, ferns, and hydrangeas for instant, portable color. 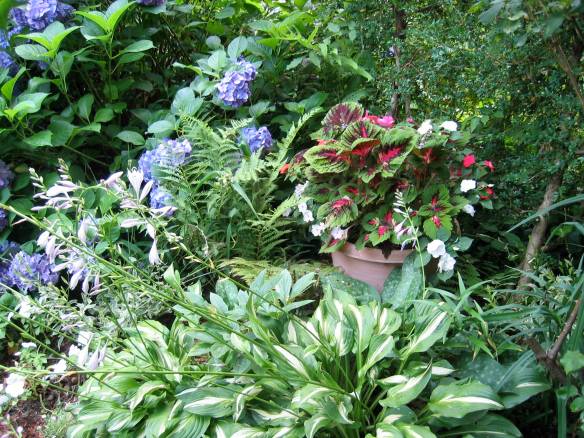 If there’s one good rule for successful annual containers, it might be ‘Stuff it all in there.’ The urn below, created by landscape designer Mary-Liz Campbell at the entrance to her home in Westchester County, has at least five different plants, including cannas, Japanese blood grass, variegated ivy, and sweet potato vine. 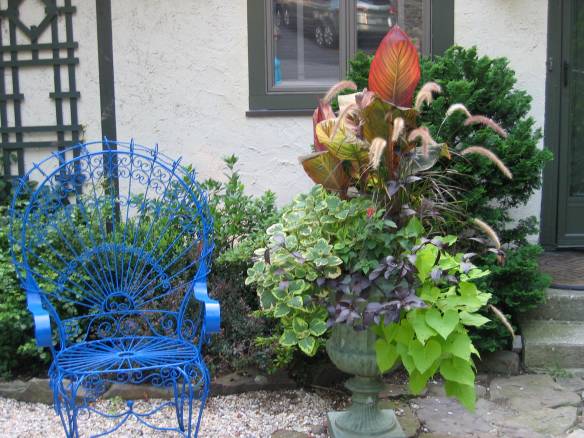 Two important things to do with container plantings: feed and water. A lot. Nutrients in containers get used up quickly.

Last, an unpretentious little grouping, seen last spring on an Amsterdam doorstep. Not much to it, really — it’s mostly just one plant per pot — but doesn’t it make you want to go plant up some containers and stick them on your front steps? 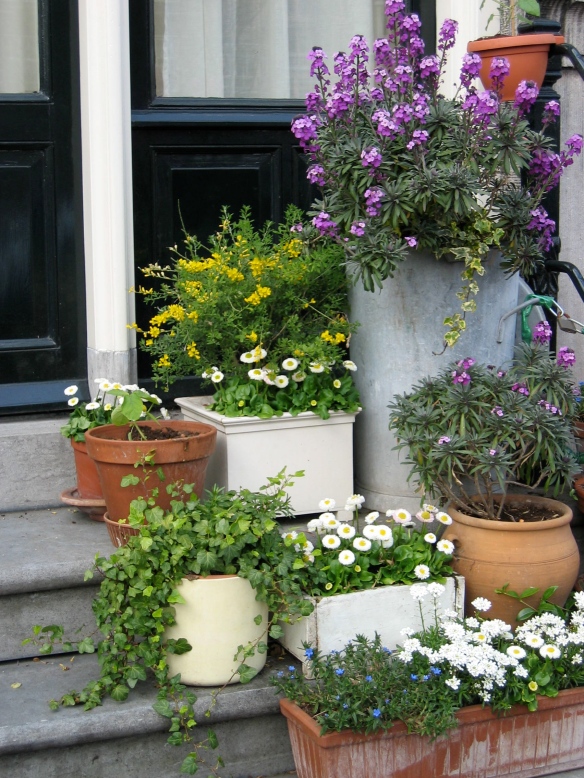