HERE’S A NEW YEAR’S GOODIE. Yep, with the turn of the calendar, it’s time to start thinking about…summer houses! The listing says this sweet and unpretentious 3BR, 2 bath  (bigger than it looks at from the outside) dates from 1847, and that seems about right. The symmetry, porch columns, pilasters on either side of the front door and six-over-six windows, all say Greek Revival to me. At the same time, the front porch and picket fence say farmhouse (they’re not mutually exclusive). It’s in the village of Greenport,on Long Island’s North Fork, where nearly all the houses are of similar vintage (see more of Greenport’s architectural charms here). 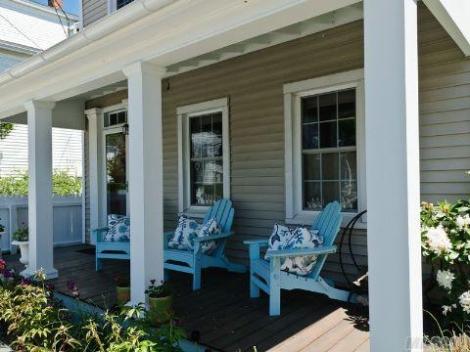 The price has just been reduced by 30K. The still-upwards-of-400K ask reflects the tip-top condition of the house, the optimism of the sellers, and the market being pretty strong.

Except for the dated kitchen, the house appears immaculate — renovated perhaps to a fault (recessed lights in old houses are a particular peeve of mine).

Check out the listing, with lots more photos, here.

Anyone local have insight to share about the Main Street location? 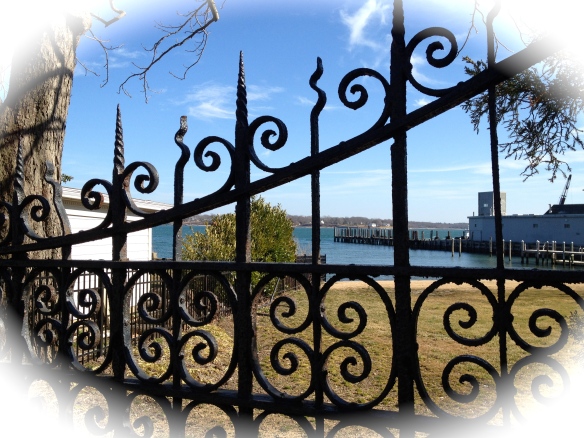 A FIELD GUIDE to 19th century American architecture, all on one block in one town. Not even that long a block either: Bay Avenue in Greenport, on the North Fork of Long Island. There’s everything from a c.1820 Greek Revival sea captain’s cottage to squared-off Italianates of the 1840s, front porch farmhouses, and turreted Victorians. Take a walk and gawk with me… 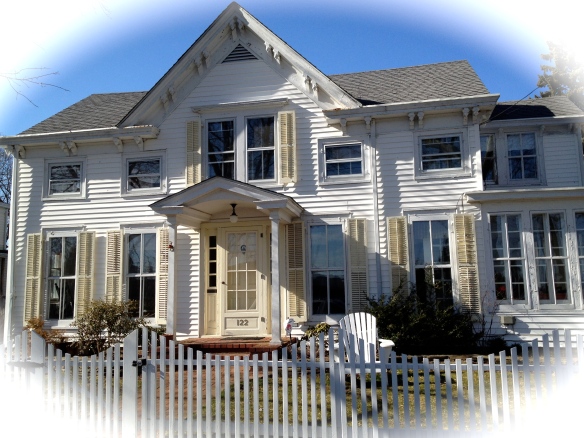 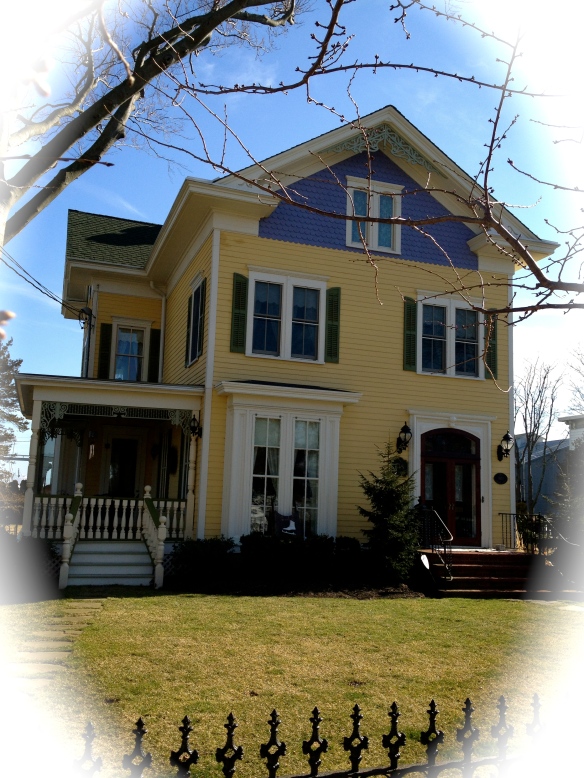 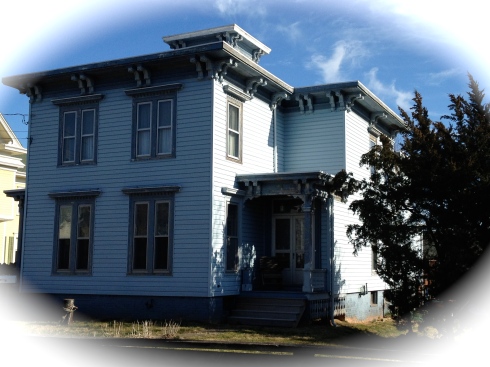 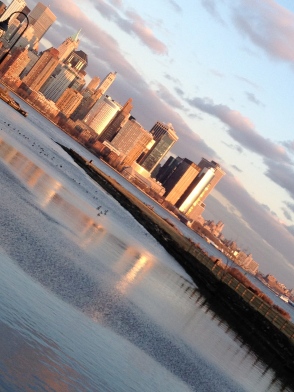 SO MUCH FOR PRECONCEIVED — or rather, outdated — notions. I hadn’t been to Jersey City in probably ten years, so when I went there yesterday (a distance of 7 whole miles from my home in Brooklyn) to visit a friend, my first reaction on driving through the streets was a surprised “This is NOT BAD!”

In fact, it’s pretty great. There are plenty of grubby areas inland, but the waterfront sections, with their sparkling views of lower Manhattan and the Statue of Liberty, and many blocks around, have been totally spiffed up. It’s not just hi-rise city, either. Fine blocks of 19th century row houses in the historic neighborhoods are likewise in good shape, which means we’ve missed the boat on real estate investment. 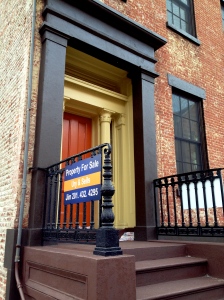 For better or worse, depending on your P.O.V., Jersey City has gentrified, and it happened while I wasn’t paying attention. Walking around with my friend Joe (for as long as we could stand in the bitter cold), we passed a brick row house, right, with a nice Greek Revival doorway, colorfully painted, and a ‘For Sale’ sign. “It’s probably over a million,” Joe said. Said I, ever the victim of wishful thinking. “I’m guessing 899K.” Joe quickly found the listing on his iPhone. He was close: the ask is $1.15M, in ‘as is’ condition.

Of architectural delights, there are plenty. They’ve been hiding in plain sight all this time. Have a look. 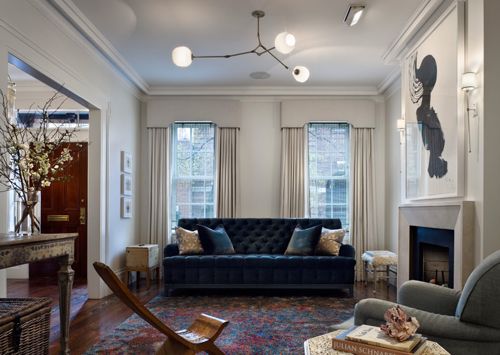 THIS WEEK’S INSTALLMENT of The Insider, my weekly column on Brownstoner.com, is a no-holds-barred (and no expense spared) renovation of an 1840s Greek Revival brownstone in Brooklyn Heights.

Both architect and designer are Brooklyn-based. The house was basically taken down to its brick shell and thoroughly overhauled by architect Brendan Coburn, from new floor joists to custom millwork and cabinetry in every room.

The decor, by Jennifer Eisenstadt, is unconventional, even over-the-top in its unusual combinations of color, pattern, and style. Case in point: the living room, above, which has both a tufted velvet sofa and carved wood African birthing chair.

Other rooms have chevron-patterned parquet floors and Chinoiserie wallpaper in red and black. Go here to see the whole thing.

NEW YORK in 2011 is truly a great garden city. World-class, I’d venture to say. Yet, as Nancy Berner and Susan Lowry point out in the newly revised edition of Garden Guide: New York City (W.W. Norton, $22.95), as recently as 10 years ago, people were puzzled to hear they were writing such a guide. Gardens in New York City? Really? Are there enough to fill a whole book?

Now there can be no doubt. In the past decade, there’s been a great flowering, if you will, of gardens and landscape installations all over the five boroughs. There are the obvious, most impressive recent ones, like Chelsea’s High Line — the conversion of rusty elevated rail line into a well-used planted park — and landscaping efforts at the Battery in lower Manhattan, where Dutch designer Piet Oudolf has brought a naturalistic new aesthetic to the riverfront.

The book calls attention to gardens that have been around a long time, but that I’ll bet a lot of newish arrivals to the city (and maybe some oldish ones) don’t quite realize are there, including the attractive, well-maintained botanic gardens in Queens and at Snug Harbor in Staten Island, where they are interspersed among picturesque Greek Revival houses.

Even I, a NYC resident of 40+ years, just ‘discovered’ what the book calls “the crown jewel” of New York City gardens — the Conservatory Garden at 105th street and Fifth Avenue, six acres of romantic magnificence in all seasons — within the last few.

Garden Guide: New York City covers more than 100 gardens open to the public, including the Lotus Garden on West 97th Stret, the only rooftop community garden in New York City; urban farms from the Bronx to Red Hook; and the small plots around such historic houses as the Morris-Jumel Mansion, the Dyckman Farmhouse Museum, and the Mount Vernon Hotel on East 61st Street (formerly known as the Abigail Adams house).

Many of NYC’s gardens are concealed in some way — inside museums, hidden behind skyscrapers, up on rooftops. Probably none of us knows New York City’s gardens as well as we might. This chunky little guide feels good in the hand, fits neatly in the glove compartment, and insures that no weekend need pass without discovering some new-to-you refuge of green.