CHOOSING EXTERIOR PAINT COLORS is even more nerve-wracking than choosing interior paint colors. After all, everyone will see them. And you have to consider context. You don’t (I don’t anyway) want it to clash with the house next door.

I’m doing some spiffing up at my 3-family rental property in Boerum Hill this month. It’s an 1830s Greek Revival with, remarkably — considering all the trials the building has been through in terms of ownership, receivership, and changing neighborhood over almost two centuries — a nice original doorway, left, with fluted pilasters and egg-and-dart molding.

In addition to a new wood vestibule door, below, which replaced a salvaged French door that never closed properly and had cracked panes of glass (and therefore did nothing to exclude noise and dirt), I’m debating colors for a partial re-painting of the building’s facade.

The block is not landmarked, so I could do chartreuse and hot pink if I wanted, but I’ve decided to stick with the same general scheme as before. When we bought the house in 1979, it was dark red. We changed it to the present gray with white trim — probably a bad idea in any urban environment. I’d love to repaint the entire facade, but that will have to wait. Right now I’m just doing the ground level, from the cornice down, and I’ve chosen a medium gray (Benjamin Moore Platinum Gray) for the concrete section, pale gray (Ben Moore Cliffside Gray) for the wood door surround, and dark gray-blue (Ben Moore Hamilton Blue) for the door itself. Classic, conservative, safe. Very safe, as the paint company pairs the three colors on one of their “Color Preview” chips. Why mess?

As long as we’re discussing the ground floor of this building, I have to admit to making a pretty dreadful design mistake there when I was young and ignorant. The building, when we bought it, had a bodega in the ground floor with an ugly aluminum storefront. The c. 1940 NYC tax photo shows a store with an old wood storefront, but that was long gone. Wanting to convert the ground floor store to an apartment, we decided against restoring the old wood storefront (probably for money reasons, but also practical ones — it seemed less secure than concrete). We built a new solid wall with these odd windows, which look much better from inside than out.

If I had it to do all over again, I would restore the storefront, as I’ve occasionally seen done. It can still be used as an apartment. There’s one I know of in Carroll Gardens, on Hicks Street and Union, and another that springs to mind on Court between Kane and DeGraw.

Meanwhile, I wouldn’t mind doing some planting in large tubs or containers below those awkward windows. The building next door (to the right in the photo), which has an unusual-for-Brooklyn cast-iron decorative front, has an old clawfoot tub in front with evergreens  that persist year after year, despite passersby chucking trash in there and spotty watering.

NOTHING I love more than a quickie renovation. When a longtime tenant finally vacated the ground-floor apartment of my building in Boerum Hill on January 31 (never having dusted in 10 years, apparently), my son Max and his handy dad swooped in like a SWAT team to unhook the old kitchen sink, install a new one, move and re-plumb the stove, and build an L-shaped half wall that makes the kitchen an entity instead of three appliances floating in space.

I called a re-glazing company to make the pitted, rusty bathtub like new ($300), and hired an electrician to install a ceiling fan, hang new pendant fixtures in the living room and kitchen, and a sconce in the bedroom (all IKEA), and add grounded outlets in the kitchen and bathroom.

Then Max installed over 100′ of baseboard. He and his girlfriend Alexis (they’ll be moving in there this weekend) spackled and puttied; I primed; she painted two coats of a gorgeous sage green (Benjamin Moore’s Green Tea), exorcising all traces of the previous occupant’s salmon pink.

In the process, I re-appreciated the ol’ place. The building is 1830s. The ground floor was originally a store; the ceilings are nine feet tall.

What’s left of the original architecture is practically nothing, but the exposed brick wall (very trendy in the early ’80s, when we first turned the former bodega into a rental unit) has a beautifully proportioned fireplace opening. 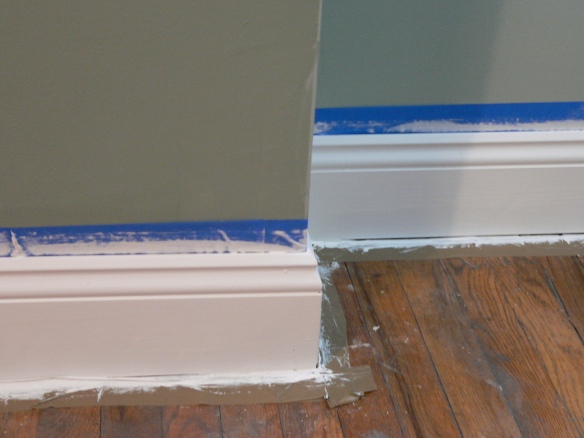 In the back bedroom, overlooking a garden the tenants share, are the most paint-caked window moldings ever, bottom.

They should be stripped. We didn’t bother, but as I lovingly stroked yet another coat of semi-gloss over them this past weekend (at least the fifth time I’ve done so since we bought the building  — as children! — in 1979), I was conscious of the whole Greek Revival thing: how these fluted columns, lumpy and chopped up as they are, were intended as an homage to ancient Greece, in days when the building and the neighborhood were a lot more elegant than they are now.

What a difference a base makes

That they’ve survived 180 years is miraculous; I’m not getting rid of them now.