I’M JUST BACK from Florida’s Gulf Coast, where I attended Sarasota Mod, a conference aimed at educating the public (and hopefully saving) the city’s stock of innovative post-WWII housing and public buildings. But before I delve into all that — and delve I will, on this blog and in a piece for Architectural Record — I couldn’t resist a post about another, earlier love: 1920s Mediterranean Revival-style cottages. Sarasota developers built them to meet the needs of people beginning to discover the charms of what had been wilderness a few decades before.

Top, not a cottage — that’s Ca’ D’Zan, an over-the-top Venetian-style palazzo built for circus impresario John Ringling and his wife Mable in 1926, now restored and re-furnished down to the original china and silver. We were treated to dinner on the terrace there, below, sunset included. 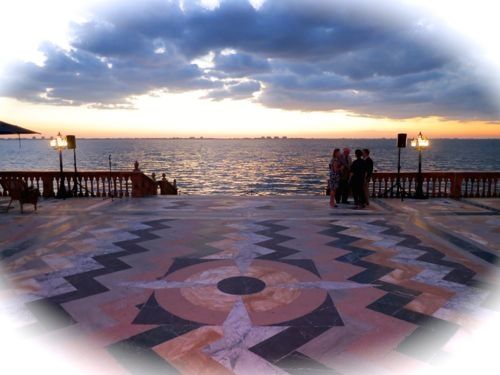 One lunch hour, I strolled the back streets of Sarasota’s business district and found, in the shadows of condos and parking garages, a few 1920s buildings that have survived the relentless march of commerce. Can you spot one in the photo below? 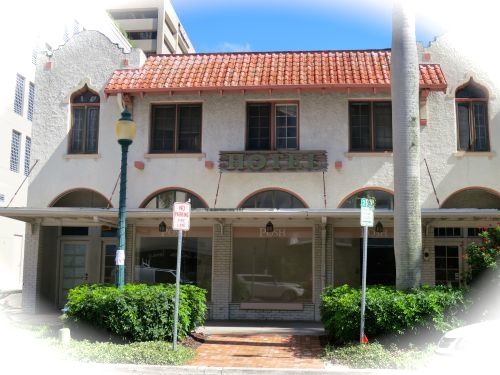 What fun it was to come across Burns Court, below, a rare, intact street of stucco cottages, each painted and decorated with Florida flair. Built in 1926 by developer Owen Burns (who also built Ca’ D’Zan), Burns Court is on the National Register of Historic Places. 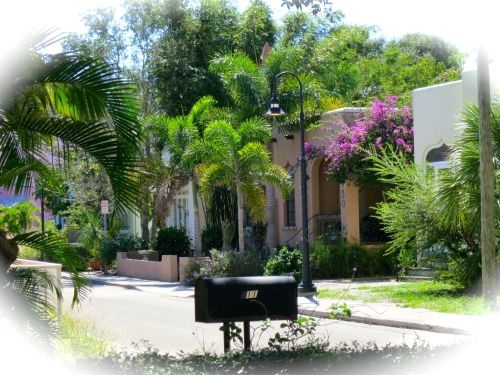 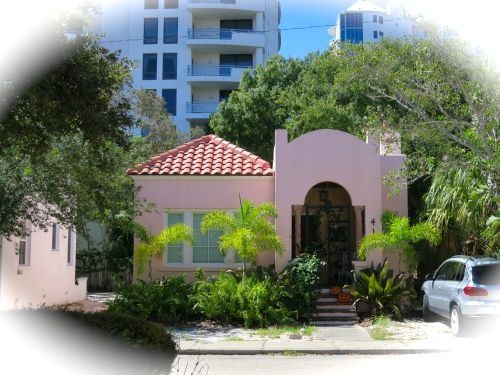 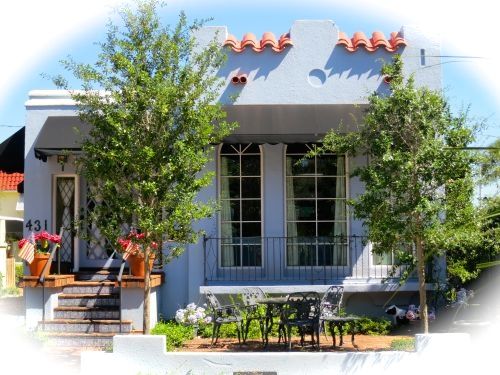 Just east of Orange Avenue, in the streets around Laurel Park, there’s a whole neighborhood of wood-frame 1920s bungalows. Below, a small apartment complex in that red-tile-roof, arched-windows ersatz Spanish style so beloved in the Twenties. Most, though not all, of the homes in the Laurel Park area are well-maintained, with landscaping that is beyond lush, sometimes obscuring the houses from the street. 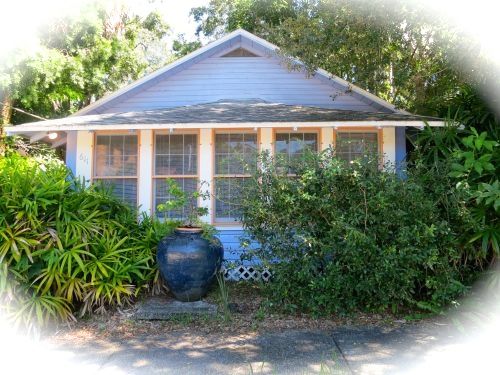 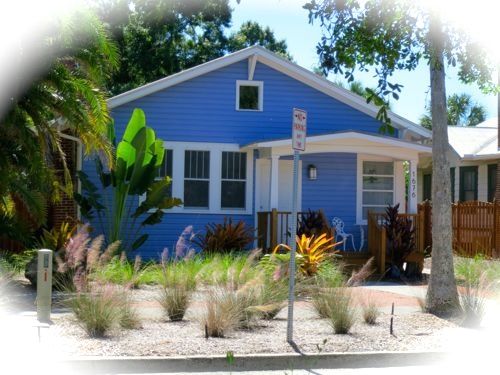 Must add this guy to my mailbox archive: 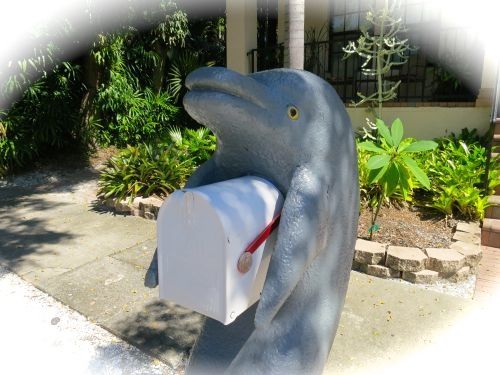 TODAY MY SISTER AND I wandered the streets of Pine Neck, a bayfront community about three miles west of Sag Harbor, on the north shore of Long Island’s South Fork.

It should by rights be called Oak Neck for the towering trees that define the neighborhood; it’s not all that piney, but someone must have thought Pine Neck sounded better.

The area’s cottages, each unique, seem to be mostly of 1940s vintage.

With few signs of encroaching development, it looks more or less as it did in the days before rock’n’roll.

We looked last night at some real-estate listings, which confirmed that one thing has changed since the Andrews Sisters ruled the air waves: the prices. The active listings seem to start at about 400K for the smaller, non-waterfront cottages and ascend from there.

The unusually large (for the area) waterfront property in the two pictures above sold last year for $1.1million.

Most of the houses are on small lots (about one-tenth of an acre), neither derelict nor overly spiffed up. The house below is an exception.

I’m guessing many of them are still owned by the families that first bought or built them.

There are few visible ‘For Sale’ signs. The houses below are not necessarily on the market; they’re the ones that caught my eye as we rambled, for one reason or another.

The sandy beach on Noyac Bay, below, is the reason a community of summer cottages sprung up in this particular spot. None of the houses are more than a few minutes’ walk away.

Here are a few of the coveted bayfront cottages:

And some of the local denizens:

This is my sister’s adorable pea-green rental, below, recently renovated and kitted out with mid-20th century furniture.

One of many on Madison Street

Could hardly be smaller – or cuter

Rather fancy, with that fabulous fanlight

Signage at Ruby Beets, a longtime fixture for vintage and new home decor

TRY AS I MIGHT, and living in the Hamptons as I do, I just can’t seem to aspire to a sprawling house on some acreage, with a swimming pool, behind a hedge. It’s the little cottages I invariably relate to, that make my heart sing (although I would definitely do something about the ivy that’s devouring the one above).

These pictures are of three neighboring houses on the outskirts of East Hampton village, opposite a cornfield. There’s something about them — their un-ostentatiousness, their not-trying-too-hard charm — that make them look, to me, like happy places to live.

Gravel drive, arbor at the end…

Just to clarify, in response to a confused e-mail: I refer to several different Fire Island communities in the post below, but all photos were taken this week in Ocean Beach.

IN THE ANNALS of my personal real estate regrets, Fire Island is a biggie. Coulda shoulda woulda.

For non-New Yorkers, Fire Island is a 40-mile-long, quarter-mile-wide sandbar off the south shore of Long Island, reachable only by ferry and banned to cars; the only wheeled vehicles are bicycles, golf carts, and little red wagons.

We rented the Ocean Beach charmer, above, for a month in 1985.

In the early 1980s, my parents rented a 1920s cottage on a huge lot in Lonelyville, reached via a long wooden boardwalk through stands of tall grass, invisible to all comers until the last instant. It could have been had for $100,000. They didn’t buy it, nor did we. I was worried about mosquitoes, and money.

In 1998, having rented in Fire Island many more summers, we bid in earnest on a property in Fair Harbor, very near the ocean — one of those quirky places you know by now I like. It was known as ‘Half House,’ because half of it (the bottom half) had been washed away in the great hurricane  of 1938. So the original 2nd floor sat atop a wood deck — just a cedar-shingled triangle, with a separate guest shack, on two lots, a rarity. We negotiated all winter to get the price down to $245,000, then backed out at the last minute. I was worried about beach erosion, flood insurance, and money.

Somebody slap me upside the head, willya?

Of course, now there’s not a thing under half a mil anywhere on Fire Island, and in that price range it’s going to be the size of a trailer.

Earlier this week, I spent two days in Ocean Beach, visiting a friend who reminded me I passed on the house next door for 180K, now on the market for 850K.

Ocean Beach is the metropolis of Fire Island, the only community with an actual main drag, below, of stores and restaurants. It’s also the only year-round community, with water and an elementary school, but that is not a lifestyle for the faint-hearted (or sociable). The Ocean Beach ferry runs all year long, weather permitting, though in January and February it’s more like an ice-breaker.

I walked around Ocean Beach taking pictures, noting how few and far between the remaining old houses are. Most have been torn down and replaced, or expanded beyond recognition, but it’s those funky vintage cottages that are dearest to my heart.

Of course I looked in the windows of real estate offices. There’s a geodesic dome (!) for 595K in nearby Corneille Estates, and a number of other properties in the 5’s and 6’s, which is probably a comedown from years past.

I’m in no position to take advantage at the moment, but the beach is nice and wide, and I didn’t get a single mosquito bite.