CHOOSING EXTERIOR PAINT COLORS is even more nerve-wracking than choosing interior paint colors. After all, everyone will see them. And you have to consider context. You don’t (I don’t anyway) want it to clash with the house next door.

I’m doing some spiffing up at my 3-family rental property in Boerum Hill this month. It’s an 1830s Greek Revival with, remarkably — considering all the trials the building has been through in terms of ownership, receivership, and changing neighborhood over almost two centuries — a nice original doorway, left, with fluted pilasters and egg-and-dart molding.

In addition to a new wood vestibule door, below, which replaced a salvaged French door that never closed properly and had cracked panes of glass (and therefore did nothing to exclude noise and dirt), I’m debating colors for a partial re-painting of the building’s facade.

The block is not landmarked, so I could do chartreuse and hot pink if I wanted, but I’ve decided to stick with the same general scheme as before. When we bought the house in 1979, it was dark red. We changed it to the present gray with white trim — probably a bad idea in any urban environment. I’d love to repaint the entire facade, but that will have to wait. Right now I’m just doing the ground level, from the cornice down, and I’ve chosen a medium gray (Benjamin Moore Platinum Gray) for the concrete section, pale gray (Ben Moore Cliffside Gray) for the wood door surround, and dark gray-blue (Ben Moore Hamilton Blue) for the door itself. Classic, conservative, safe. Very safe, as the paint company pairs the three colors on one of their “Color Preview” chips. Why mess?

As long as we’re discussing the ground floor of this building, I have to admit to making a pretty dreadful design mistake there when I was young and ignorant. The building, when we bought it, had a bodega in the ground floor with an ugly aluminum storefront. The c. 1940 NYC tax photo shows a store with an old wood storefront, but that was long gone. Wanting to convert the ground floor store to an apartment, we decided against restoring the old wood storefront (probably for money reasons, but also practical ones — it seemed less secure than concrete). We built a new solid wall with these odd windows, which look much better from inside than out.

If I had it to do all over again, I would restore the storefront, as I’ve occasionally seen done. It can still be used as an apartment. There’s one I know of in Carroll Gardens, on Hicks Street and Union, and another that springs to mind on Court between Kane and DeGraw.

Meanwhile, I wouldn’t mind doing some planting in large tubs or containers below those awkward windows. The building next door (to the right in the photo), which has an unusual-for-Brooklyn cast-iron decorative front, has an old clawfoot tub in front with evergreens  that persist year after year, despite passersby chucking trash in there and spotty watering.

ONE OF THE GREAT THINGS ABOUT BLOGGING is making new friends. Lula and I met only a few months ago, when she stumbled upon my blog and contacted me. We soon discovered we are neighbors in two places. She has an adorable cottage a few blocks from mine in Springs (East Hampton), N.Y., as well as a parlor floor she’s owned for 16 years in a classic 1850s Italianate brownstone in Brooklyn, top and below, virtually around the corner from where I lived for two decades (though we had never run into each other).

She lives in a state of Bohemian splendor, presently suspended in mid-renovation. Having peeled off old wallpaper, the walls have a Venetian plaster look but await further plaster and paint. The ceiling has been stabilized in parts where it was falling down. There are nearly intact plaster cornice moldings all the way around, with what Lula calls her ‘Shakespearen troupe’ of faces. A new kitchen is in the cards, and there’s a potential terrace at the back which is just tar paper, no railings, at the moment.

Most of the elaborate plaster cornice is in great shape, above. Other parts, below, not so much.

Lula is grappling with the questions endemic to living on the parlor floor of a brownstone.

All that remains to be seen. Meanwhile, the place has great cozy charm. With all that original detail, antiques acquired piecemeal over the years, an overstuffed sofa, plants on the window sills, and faded Oriental rugs, it feels much like being back in the Victorian era, for real.

After my first-ever visit to Lula’s apartment, we went and checked out the new Fork & Pencil warehouse on Bergen Street, above, a few-months-old, crammed-full, well-vetted consignment store — a spin-off of the smaller storefront on Court Street — whose proceeds go to non-profit conservation, arts, and other organizations. It’s more Lula’s kind of place than mine, filled with traditional antiques, but more to the point, I don’t need anything at the moment. Browsing there is purely a theoretical exercise for me. I admire, appreciate, and move on. Don’t need anything, thanks!

We had a civilized late lunch nearby at Broken English, the sort of self-conscious industrial chic space one used to expect only in Manhattan. I’m glad it’s come to Brooklyn, because my rigatoni with marinara and basil was scrumptious, and the salad, bread, and olive oil were tops. You can tell the quality of a restaurant by its bread and salad, I once read, and I think that’s on the mark. Broken English is open for breakfast, lunch, and dinner. Ignore the snarky online reviews from amateur critics and give it a try. It’s a welcome addition to the nabe, in my book.

I’M STILL HAPPILY DISCOVERING my new neighborhood of Prospect Heights, and haven’t even scratched the surface. It’s been too cold to walk around just for fun. I’ve seen only the blocks immediately adjacent to mine, and the main avenues, where I shop, eat, and do my errands.

I’m starting to appreciate Flatbush Avenue. Along this stretch of it, leading up to Prospect Park, there are large brick apartment buildings that must have been quite elegant in their late 19th century day. Today’s tacky stores detract from the street level, but if you look up, you see a bit of history. The date, the building’s name, and the cornice detail, top, suggest the Prospect View must have been a very desirable address.

The square turret on the late Victorian building, above, is like something out of Peter Pan, which is not atypical of the area.

The former carriage house, above, however bastardized, is a reminder that Flatbush Avenue was once the main route for horse-drawn vehicles, first carriages called omnibuses, then horsecars, which ran on tracks. They carried the residents of the developing areas around Prospect Park, which opened in 1873, down to Fulton Ferry landing where they could catch one of 1,200 boats a day to Manhattan.

Plaza Street rims Grand Army Plaza, a majestic traffic circle with an unoriginal triumphal arch and an extraordinary 1932 fountain with figures of Neptune and the Tritons (best photographed in spring, when the water’s on). On Plaza Street, pre- and post-war apartment buildings, above, alternate.

The controversy has died down over Richard Meier’s 1 Grand Army Plaza, above, a glazed behemoth that is a century newer than any other building in the area. When modern architcture is good, and this assured, subtly complex building is very good, it’s welcome in my book.

The main branch of the Brooklyn Public Library, above, is apparently considered one of the most important Art Deco buildings in America. It has a concave facade designed to fit around Grand Army Plaza’s oval contours. Ground was broken in 1912 for a Beaux Arts building similar in style to the nearby Brooklyn Museum, but costs and city politics slowed construction (so what else is new?) By the time construction recommenced in 1938, styles had changed and new architects were commissioned. It opened to acclaim in 1941.

Between the grand portals, below, with gilded figures from history and myth, and the inscription

Here are enshrined the longing of great hearts and noble things that tower above the tide, the magic word that winged wonder starts, the garnered wisdom that has never died

the library is an inspiring destination on a bitter cold day.

After a day of local errands, I like to stop into Pequena, below, a colorful and high-spirited Mexican restaurant on Vanderbilt Avenue. I assume the festive lights are seasonal, but maybe they’re a year-round fixture. How should I know? I’m new in town.

THE SPIFFIEST TOWNHOUSE in Red Hook, Brooklyn, is on the verge of closing for “over ask,” says Denise Cataudella, a broker with the Corcoran Group.  (“Ask” was $975,000.)

You may remember the ivory-colored 1910 brick house on Dikeman Street from last Nov. 30, when it was featured in the New York Times Sunday real estate section.

I know the house caught my eye, with its attractive cornice, six-over-six windows, bright red door, and under-$1 million price tag.

I was curious, so today I took a ride to Red Hook — one of my rare forays not involving Fairway or Ikea — and I was reminded, once again, that context is everything.

The Times picture didn’t show the vinyl-sided house next door or the boarded-up property across the street, the one with the chain link fence.  That’s Red Hook for you: gritty.  But to me, there’s excitement in those downscale neighbors; they look like they’re begging to be bought and fixed up.

The immensity of New York Harbor is right at the end of the block.  The streets are cobbled, the sky is open, and the air is fresh, more or less.  You can walk out on Coffey Street pier halfway to Manhattan, it seems.  The enormous Sunset Nursery, LeNell’s quirky ‘wine & likker’ store, and Steve’s key lime pie all beckon.

Red Hook is definitely still on the upswing.  This house was not at all a bad deal, at half  the price of a similar building in Boerum Hill.

Provided you’re OK with gritty, for the foreseeable future at least. 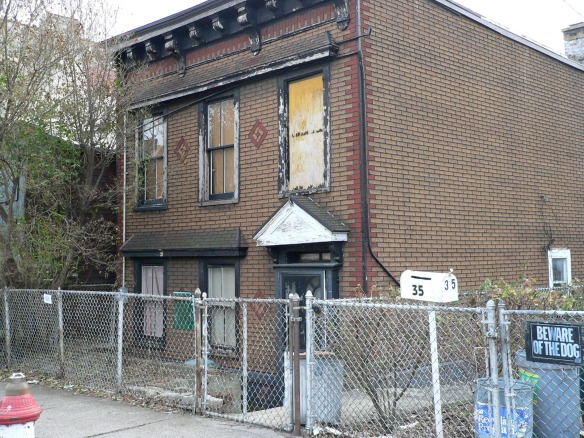 Below: Pair of oldies set back on Coffey Street