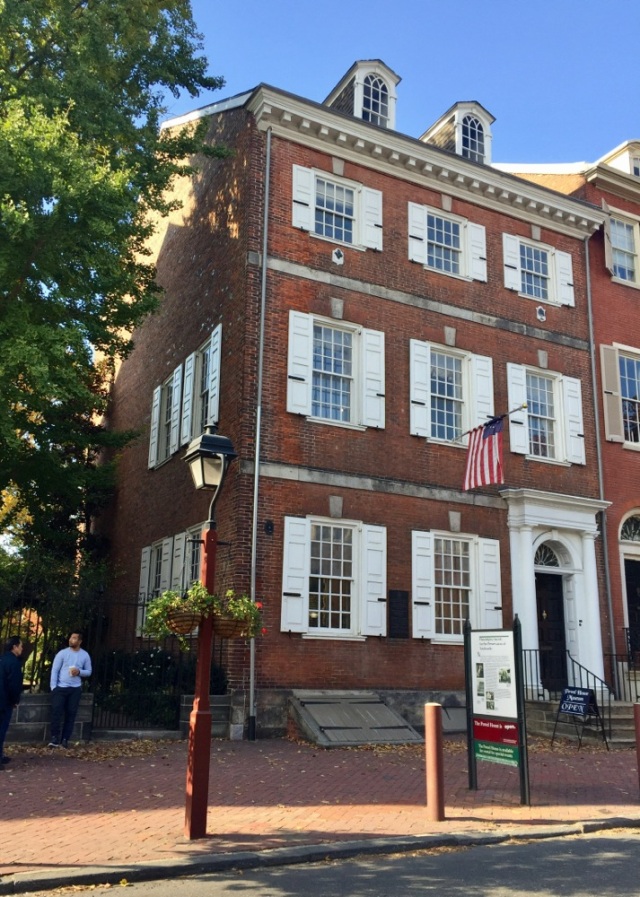 The bearded young man in stylish glasses who opened the fanlight-topped door seemed happy for company. While throngs waited, three brick-paved blocks away, to pass through security checks at Independence Hall, Robert Wuilfe and his wife, Michelle Wilson, co-site managers at the immaculately restored 1760s townhouse that belonged to Philadelphia’s mayor, Samuel Powel, at the time of the Revolution, see about a dozen visitors on an average day.

The Powel House draws the cognoscenti – American history buffs, of course (“I’ve gotten into intense discussions about the glass tax,” Wilson said), as well as architecture and design enthusiasts like myself, who want a peek at the colorful, elegantly appointed rooms of the finest surviving Georgian townhouse in the country, and perhaps a more intimate connection with those who lived there.

Samuel Powel (1738-1793) and his wife, Elizabeth Willing Powel (1743-1830), were indefatigable hosts — a politically influential power couple in the last years of America’s stint as a British colony and the first years of its independence, hosting frequent parties and meetings attended by all the founding fathers in their brick mansion on 4th Street.

George Washington was a close friend and spent time in the Powel House on a regular basis, as did Benjamin Franklin and John Adams. The Marquis de Lafayette and Benedict Arnold dined there, in Philadelphia’s first formal dining room. In that aqua-painted room (a color then thought to aid digestion), President Washington and his cabinet twice had Christmas dinner.

I thought I was going to be a tour party of one on this September afternoon, but as Wuilfe began to expound on how the house survived decades of dereliction as a horsehair brush factory and escaped planned demolition in 1931, the brass knocker rapped, and three smiling Midwesterners came in.

Wuilfe led us from the electric-blue foyer with its black-and-white diamond-patterned floor cloth, elaborate plaster arch and curved staircase of now-extinct Santo Domingo mahogany, to the reception room at the front of the house, where Powel, who inherited ninety Philadelphia properties from his father and grandfather, collected rent at a small desk, using a wax seal that still sits upon it.

The front parlor’s classic proportions are faked. There’s a false door for symmetry, a fireplace made of King of Prussia marble (the veins ran out 100 years ago), and an apothecary scale that was a gift from Franklin. 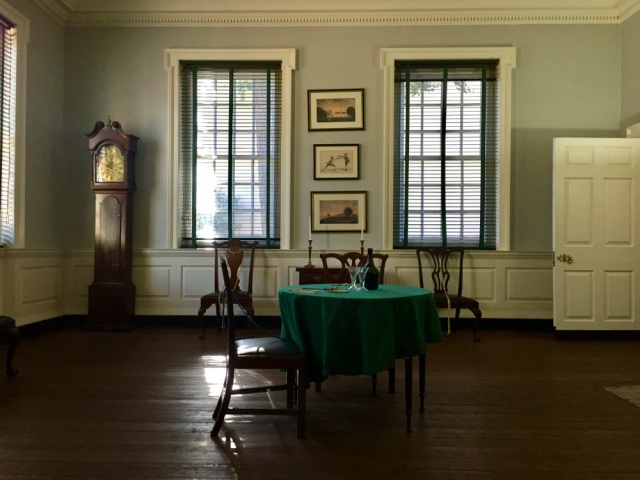 Next door, in the heavenly blue-green dining room, gilded mirrors reflect views of the garden’s boxwood topiary. The room’s tangerine silk drapes, a well-researched approximation, look startlingly modern against the blue. We admire the 18th century silver and the glossy pretzel-back dining chairs, a Philadelphia hallmark. Washington liked the Powels’ decorating, too, so much that he appropriated the paint color for the dining room at Mt. Vernon and ordered two dozen of the same dining chairs.

Two large tea caddies made of lacquered wood and imported from China were kept locked so the ten or fifteen servants, and possibly a couple of slaves, couldn’t steal from them. “A handful of tea leaves was worth more than gold at the time,” Wuilfe said. The servants were allowed to dry and re-sell used tea leaves, however. 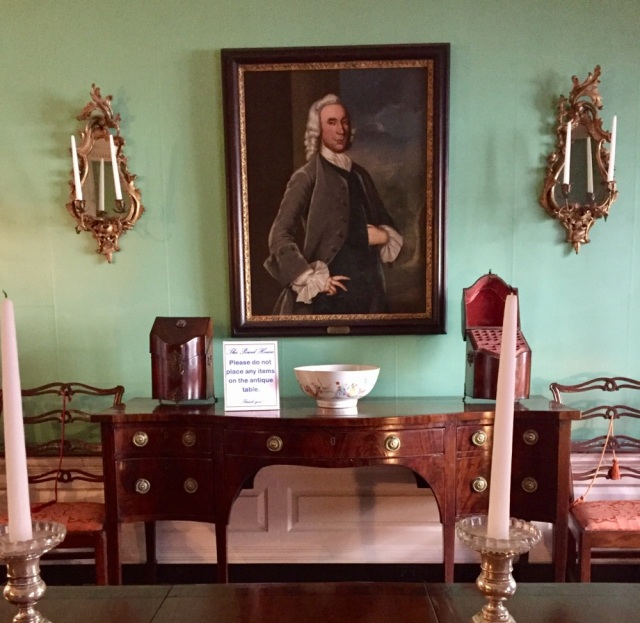 It was in the cozy upstairs withdrawing room, so called because it was where the men withdrew from female company after dinner, that our first president became less a cardboard figure to me and more a real person. The man whom Philadelphia physician and patriot Benjamin Rush said “has so much martial dignity…there is not a king in Europe that would not look like a valet de chambre by his side,” was quite vain, as it turns out.

It was a fashionable pastime to cut black paper silhouettes of other guests’ profiles at dinner parties. A framed one of Washington, believed to have been done by Powel himself, has the words “Not a good likeness” scribbled on the back. Washington didn’t like it, apparently, because it showed his double chin.

Our first president had a significant friendship with the charming Mrs. Powel, a strange ‘mourning painting’ of whom, draped in purple, hangs over the fireplace in the withdrawing room. She lost two, possibly three, children in infancy. The painting shows cleavage, but whether this was a nursing gown or Paris fashion, Wuilfe couldn’t say.

Called a “quiet abolitionist,” Mrs. Powel had Washington’s ear. It was she who persuaded him to run for a second term. “Your country needs you,” she told him, warning he’d be bored if he didn’t. He later sent her a pair of silver spurs for “spurring him on,” legend has it.

Every historic house has a ghost story. This one comes in the Rococo ballroom, whose plaster bas relief decoration is a restoration; the original is in the Philadelphia Museum of Art. In the 1950s, the tale goes, the wife of noted historian Edwin Moore reported seeing the spectral figure of an unidentified woman in a beige and lavender gown. Some time later, Mrs. Moore was searching for an authentic 18th century dress to wear to a costume gala. Shown one worn by Peggy Shippen, a Philadelphia socialite and wife of Benedict Arnold, at the last party she attended — which happened to be at the Powel House — Mrs. Moore was shocked to see the same beige and lavender frock. Wuilfe’s take? “I’m not generally one to believe in ghosts, but I don’t discount it.”

I am more impressed with the historical connections that are there in black and white, like the letter Benjamin Franklin’s daughter wrote him, describing a ball at the Powel House where she danced with General Washington. The letter is displayed in the very ballroom where they danced, as is a harp from the year 1700 — the oldest piece in the house, except for a goat cart made by Powel’s grandfather, who was 14 when he came to this country from England in the 17th century. 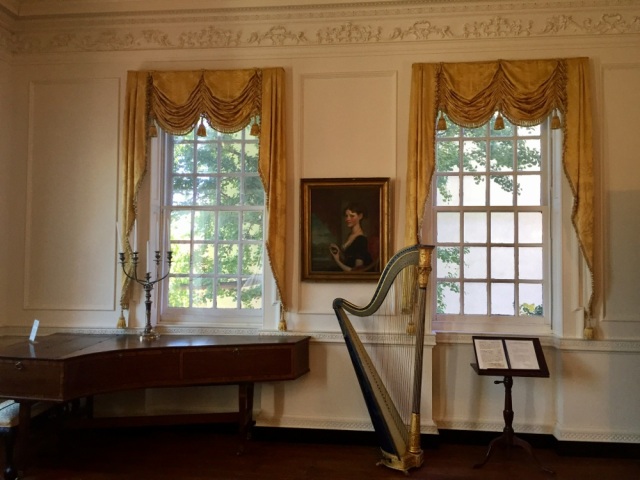 More than half the furnishings in the house are original. Standouts include a rare Chippendale settee and a chest-on-chest purchaed on Powel’s seven-year grand tour of Europe as a young man. There are also two oil portraits by Gilbert Stuart, one of Anne Pennington, a young beauty, and the other of Abigail Willing Peters, both relatives of Elizabeth Powel.

It’s said that Mrs. Powel, who came from a wealthy, politically connected family, had two unrequited romances before she married Samuel Powel. “She was a little older. It was sort of assumed it wasn’t a love match,” Wilson said. Both wanted children; after their offspring died, they adopted a nephew of Mrs. Powel’s, who inherited and eventually squandered their fortune.

Samuel Powel died in the yellow fever epidemic of 1793, along with 5,000 or more others in Philadelphia. His widow sold the house in 1798.

There’s nothing like a historic house tour and a bit of lurid gossip to bring the nation’s founding days to life in a very immediate way. “History is not just words,” as Wilson put it. “It really happened.”

Public tours are available on the hour 11:00 AM through 3:00 PM Thursday-Saturday, and noon to 3:00 PM  on Sundays, April-November, with additional Wednesdays Memorial Day through end of October. Weekends only in March and December. All other times by appointment.