Far Side of Summer in My Long Island Garden 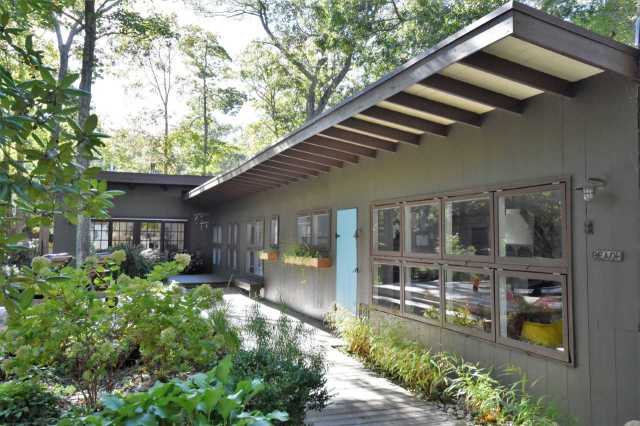 THE PAST COUPLE OF YEARS, I’ve spent the better part of April, May and June, September, October and November at my quirky vintage-modern house on the East End of Long Island, N.Y., and rented it out in high summer.

I love missing the Hamptons’ seasonal frenzy, the crowded beaches and restaurants, the scarce parking. I hate missing my native white rhododendrons in midsummer bloom, and the lilies of July and August.

The summer was hot and dry. I don’t have irrigation, so I had the garden watered by hand once a week. It survived (with a few minor losses), needing just a few days of extra catch-up watering when I returned after Labor Day, before the deluges of September began.

Toward the end of August, I asked my garden helper to put in a few hours of hand weeding before I returned. The result was that I came back to a garden in such good shape, I wandered around with little to do and a strange lack of motivation for new plantings or projects.

That went away, and the month of October has been a busy one here at Dry Shade Half-Acre (still trying to come up with a name for my property; that’s not it).

I made three trips to the dump for wood chips and created a rudimentary meandering path through an unstructured area of tall oaks dotted with a few shrubs I’d stuck in here and there over the years. With this simple, cost-free gesture, I suddenly had planting areas…definition!

I planted 300 bulbs along the path (mostly small ones like muscari and Star of Bethlehem), aiming for an early-spring carpet. Elsewhere, I put in three white azaleas, filled in holes in my perennial beds with colorful heuchera (coral bells) and euphorbia, and moved things that weren’t doing well, like non-blooming Montauk daisies, in hopes of finding happier homes for them.

The most backbreaking task was dividing huge clumps of hakonechloa and epimedium and spreading them around. I ventured into parts of the property that have never been cultivated, where digging turns up roots and rocks, and the soil is just plain dirt. Back to the dump for compost.

The other night, I was in my “winter studio” (i.e. the great room, now with insulation and wood-burning stove), going through a pile of garden notes, clippings and plant labels dating back to 2013, when I bought this property.

I came across a folder from a three-session course I took at the Brooklyn Botanic Garden in March 2014, where each student worked on plans for his or her own garden. The instructor, Jim Russell, was big on creative visualization, and he had us write up — in present tense, as if the vision was already realized — descriptions of our gardens five years hence.

It’s only been 4-1/2 years, but here’s what I wrote, and whether it’s been accomplished:

“My garden is serene, organized and thriving.” YES!

“A system of paths, made of loose material, with logs inserted for grade changes, winds through space that still has the feeling of the original oak woods…” YES!

“…with an understory of evergreens and flowering shrubs, and medium-small flowering trees like dogwoods and magnolias.” ON ITS WAY. NEED MORE PLANT MATERIAL. STILL LIKE THE CONCEPT.

“The stockade fence is gone or modified beyond recognition — screened with a tapestry of lush plantings.” UM, NO. IT’S STILL THERE, IN ALL ITS GLORY.

“There is a new deck that provides for both sun and shade…” YES, INDEED!

“…an area for vegetable and cut flower gardening…” I DO HAVE FOUR RAISED BEDS IN THE SUNNY CENTER OF THE PROPERTY, BUT SINCE I’M ABSENT IN SUMMER, THIS REMAINS A NOT-YET.

“…a remodeled shed…” NOW KNOWN AS THE GUEST CABIN, IT’S PRESENTLY IN AN ADVANCED STAGE OF FIX-UP (PHOTO BELOW)

“…and a fabulous outdoor shower.” YESSSSSS!

Perhaps it’s time to write my next five-year plan. This stuff really works! 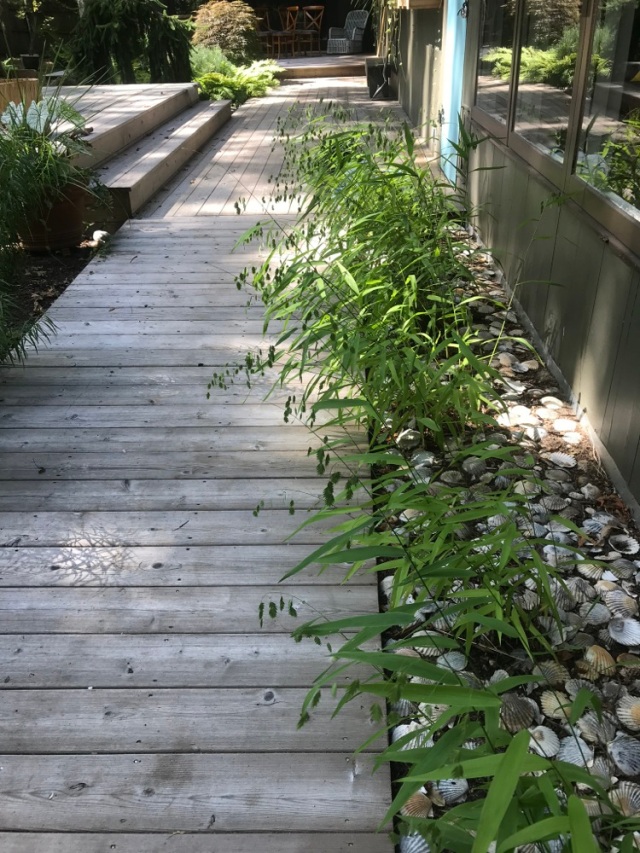 Chasmanthium (Northern sea oats) leaning out of their scallop-shell bed along the front walk. 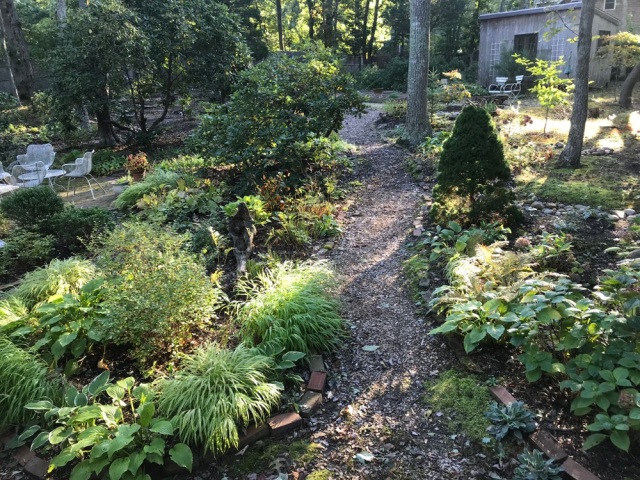 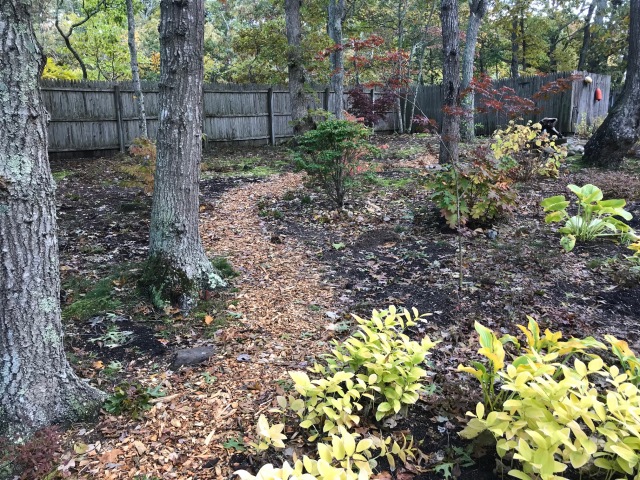 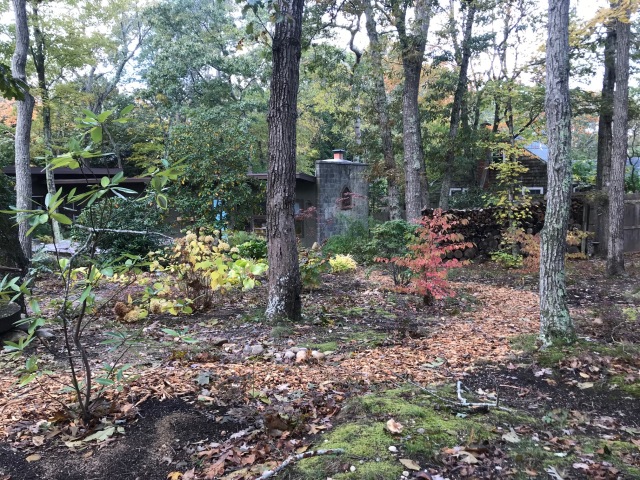 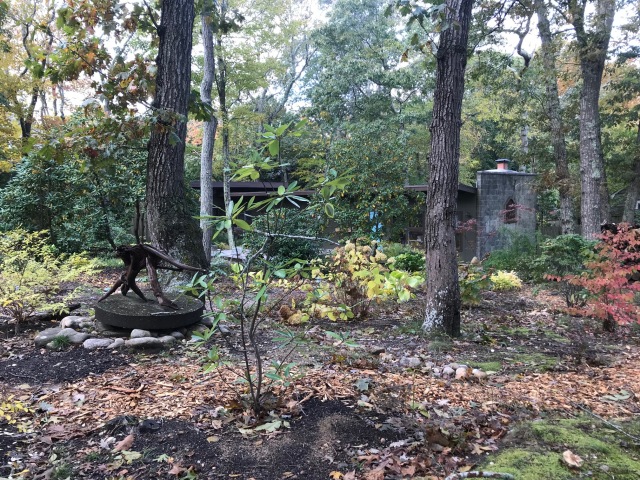 OK, not the most impressive path you ever saw, but it’s a start. 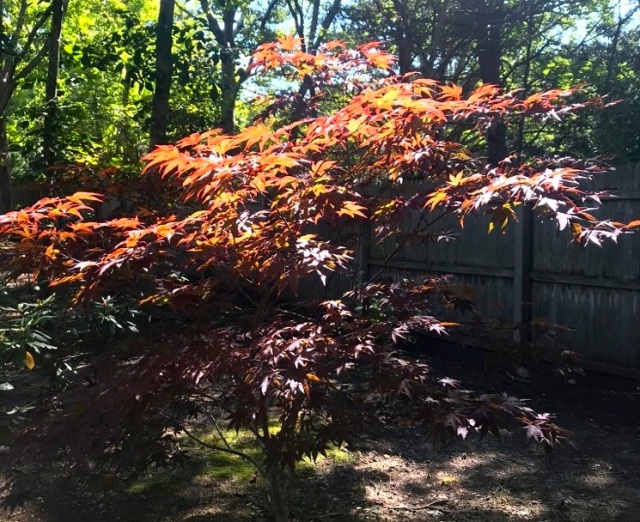 Emperor Japanese maple, one of three planted last fall and nicely settled in.

The guest cabin is being painted white, with a new pine floor, below. 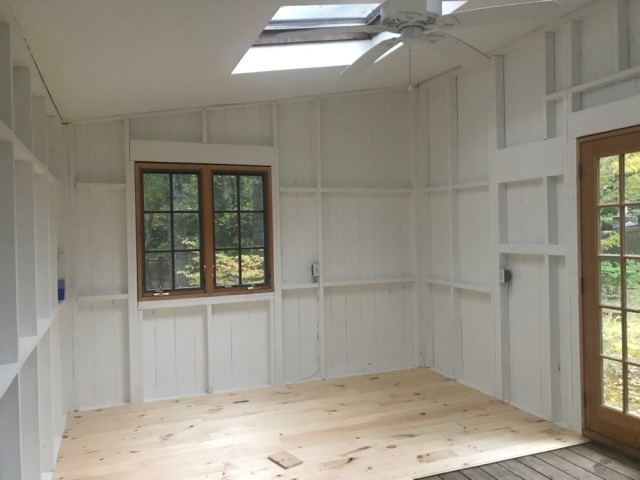 Other home improvements of the past season: a DIY bamboo privacy screen for the outdoor shower deck… 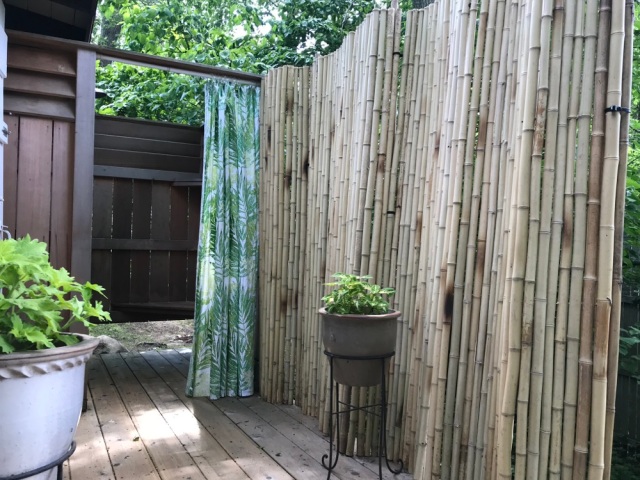 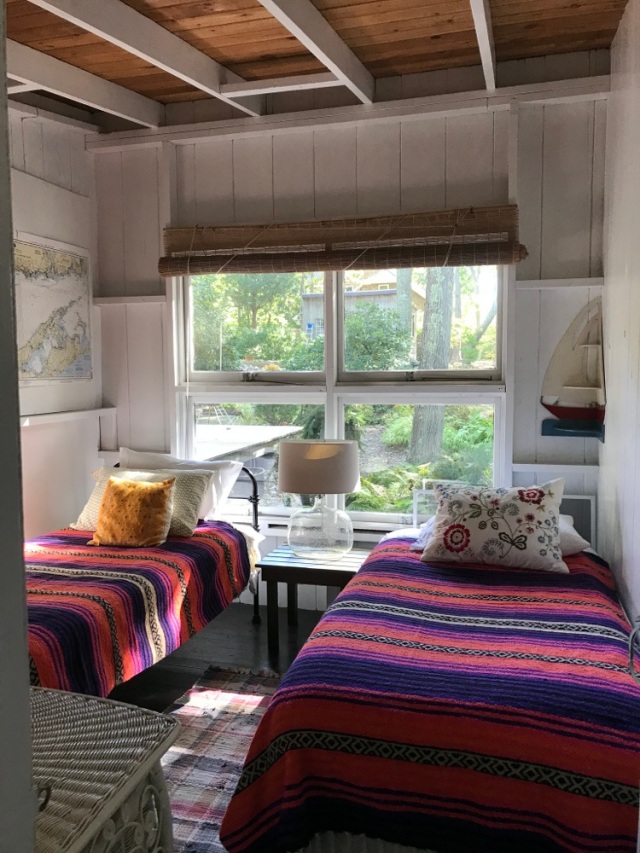 and a pair of irresistible (to me) S-shaped rope lamps. 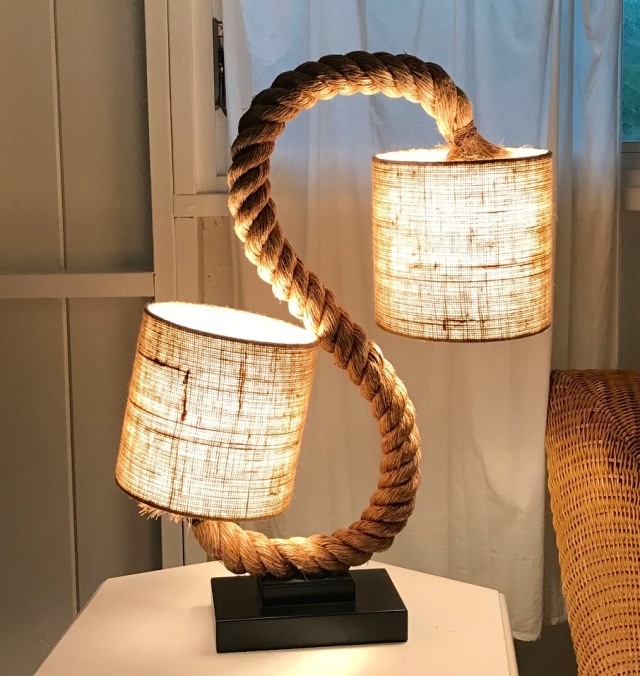 Finally, I’d like to take a quick look back to the more floriferous days of late spring, which I neglected to fully document in these pages. (It’s also a look ahead to next spring, which in Nature’s infinite wisdom will be much the same.) 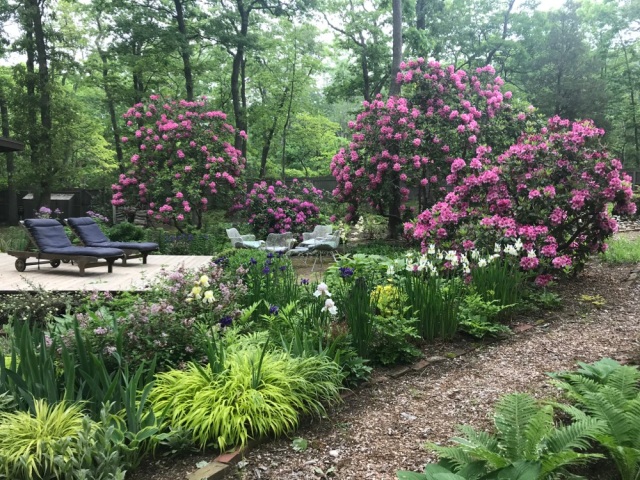 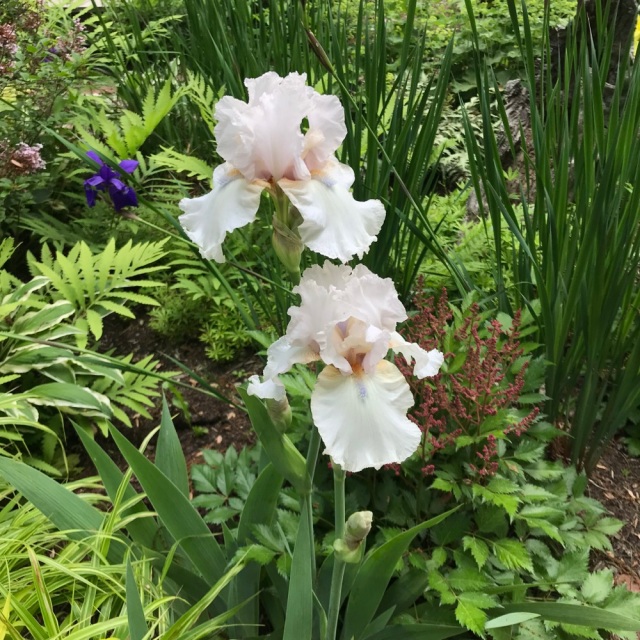 The iris show happens around the same time. 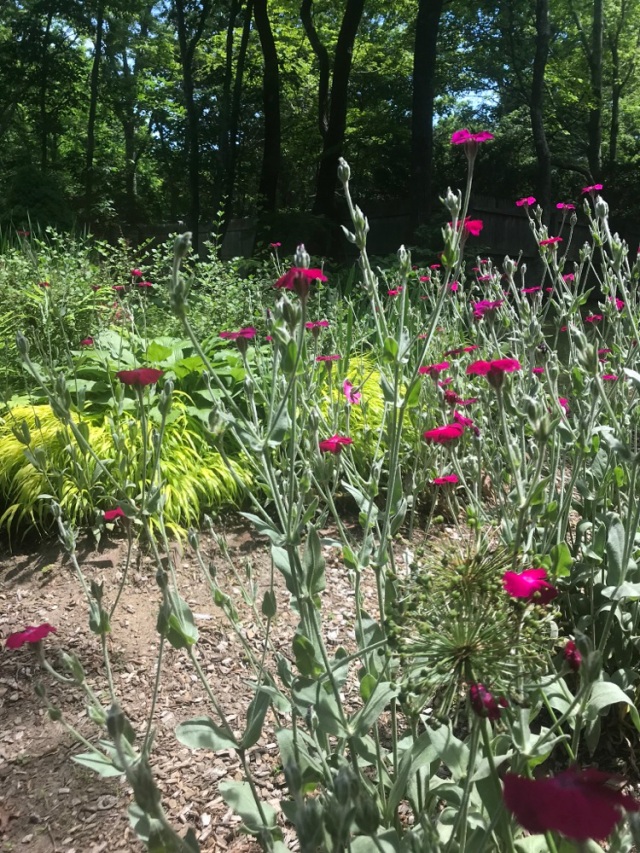 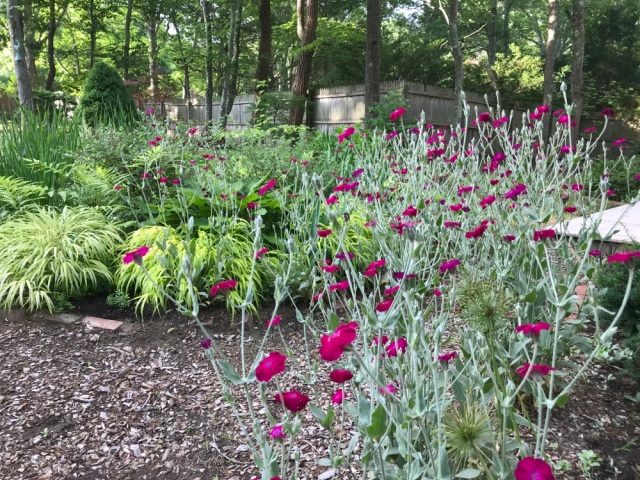 Lychnis (rose campion) are prolific self-seeders, flinging themselves into all the sunniest spots. I’m letting them have their way. 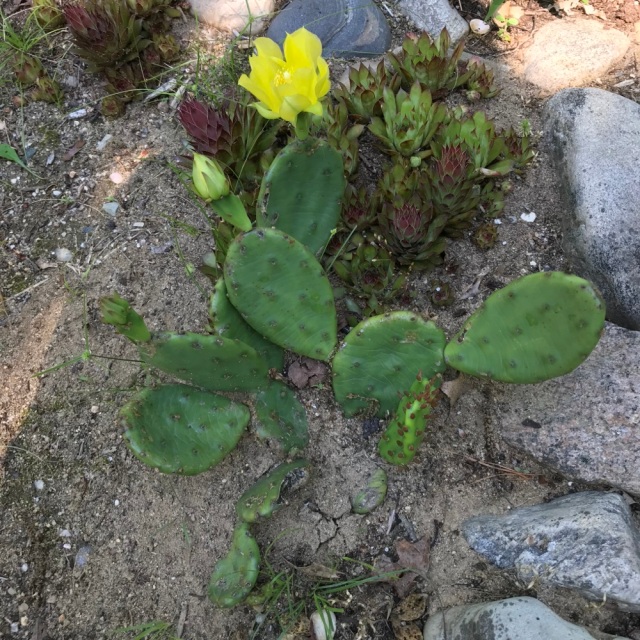 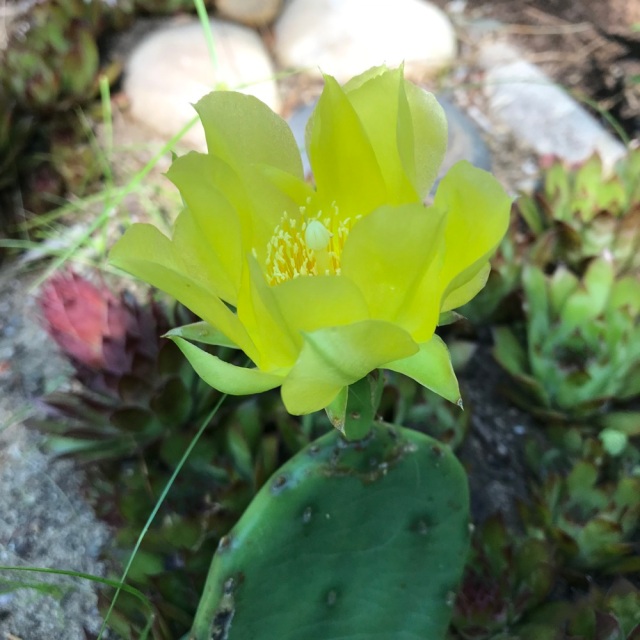 First-ever prickly pear flower, transplanted from the beach a few years back. 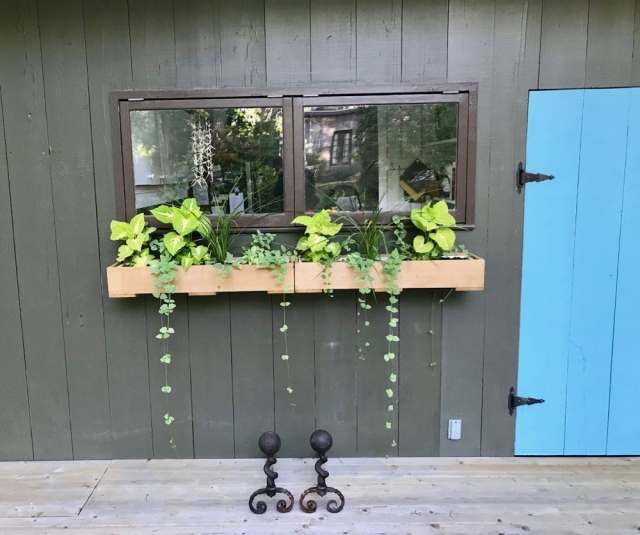 New this year: window boxes, with coleus and vinca. ##

I blog (for fun) here at casaCARA, and write (for money) about architecture, interiors, gardens and travel for many national magazines and websites.
View all posts by cara →
This entry was posted in GARDENS & GARDENING, HAMPTONS, LANDSCAPING, LONG ISLAND. Bookmark the permalink.