IT’S GETTING ON FOR SPRING, and I’ve got a decorating project to look forward to. Naturally, this makes me very happy. It’s been a while since I had an opportunity to indulge this passion of mine, since I’m a designer with no clients — only myself.

The room in need of decorating is the 400-square-foot great room at my rustic-modern retreat on the East End of Long Island. You remember my great room, don’t you? Here’s what it looked like last summer, when the interior walls were the same plank of wood as the exterior walls, and the room was (to my mind — some people liked it) dark and oppressive: 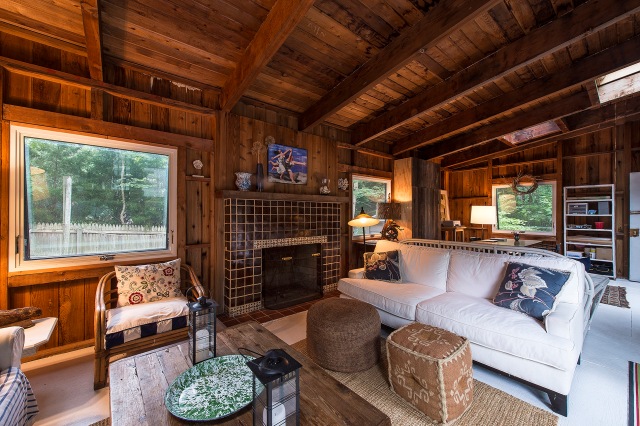 Last fall, over a period of about six weeks, I had the ceiling and walls of this room insulated, Sheetrocked and painted, and a wood stove installed, making it the only winterized space in what is essentially still an unheated summer bungalow.

The floor is still one sheet of plywood over a crawl space, and the new wood stove insert, which fit right into the opening in the existing mantelpiece — though I expect it to work well once I get the hang of it — hasn’t yet been properly fired up.

But my hope is to now be able to use the house a month longer on either side of my usual May-October season — from mid-April, when the water gets turned on, through November, when it’s turned off.  I’ll have at least one toasty room in which to hole up during those still-chilly shoulder-season months.

Basically, I’ll be moving the same furniture that was in there before back in. But I’ll have fun playing around a little with rugs and art and lamps and such.

What I’m happiest about, even more so than the already-warmer, already quieter space that’s been created, is that it’s classic, sparkling beach-house white instead of its former dreary brown. And I’m pleased that I was finally able to get at least this much done, after owning the house nearly five years.

Scroll down for the transformation. Stay tuned for the furnishing. 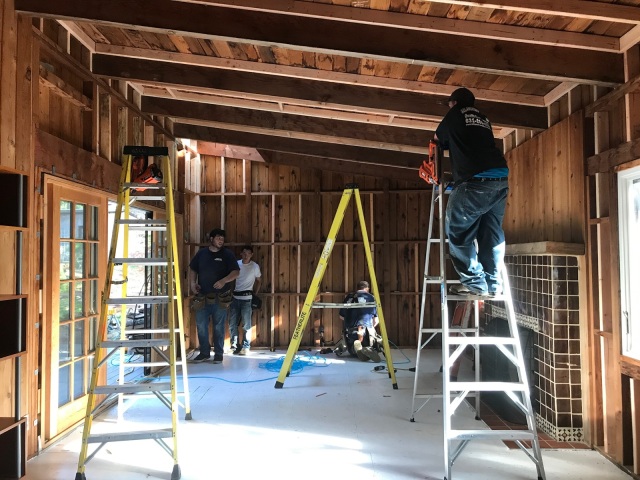 First the walls and ceiling had to be framed out with 2x4s at 16-inch intervals to hold the batts of insulation in place. 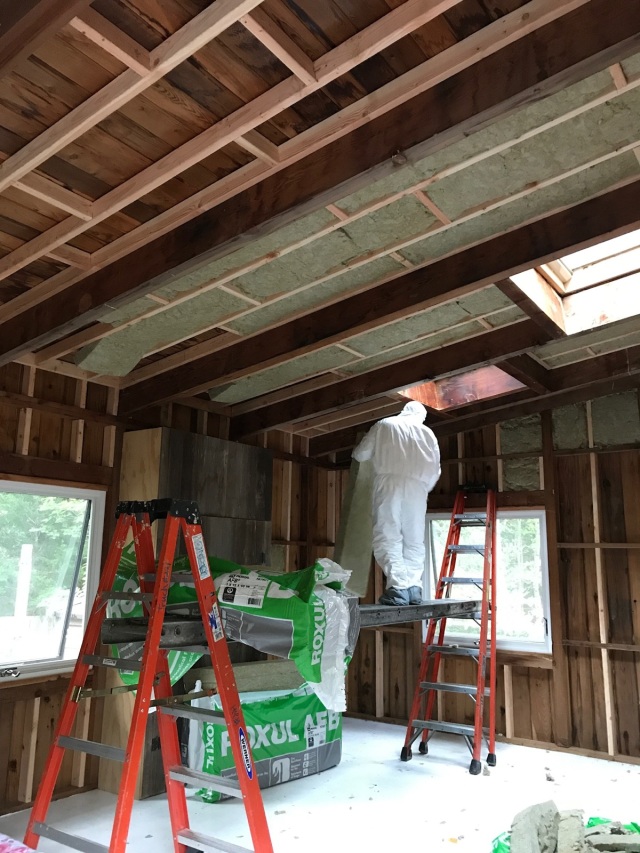 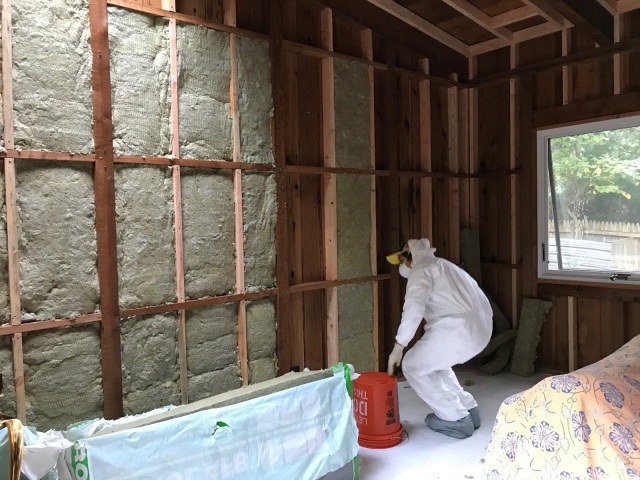 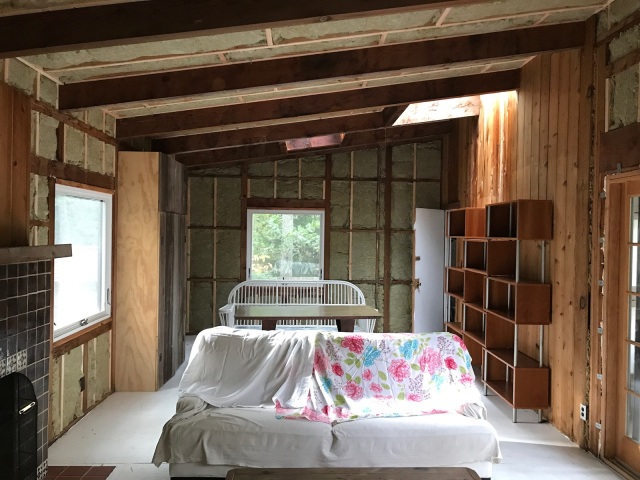 I used Roxul brand mineral wool insulation, supposed to be non-toxic and much more environmentally friendly than the pink fiberglass stuff (so don’t ask me why the workmen are wearing hazmat suits).

Next the Sheetrock went up between the ceiling beams, which were deep enough that I didn’t mind losing a few inches of them to the insulation. 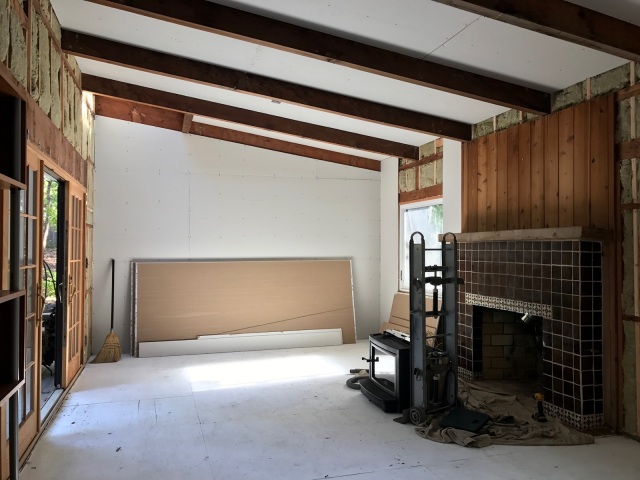 The Hearthstone wood stove insert was delivered and installed in early November. It’s a self-contained unit, lined with soapstone, and with an integrated chimney liner (so I didn’t have to worry about re-building the chimney, which was cracked and not tall enough and didn’t have a good draft). 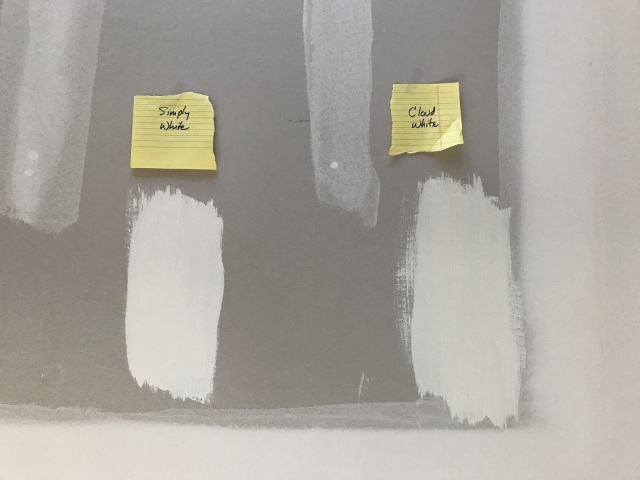 Over the fireplace and on one long section of the wall opposite, there was cedar paneling I liked. I left it for a bit of texture (enough with the Sheetrock) and had it painted white. 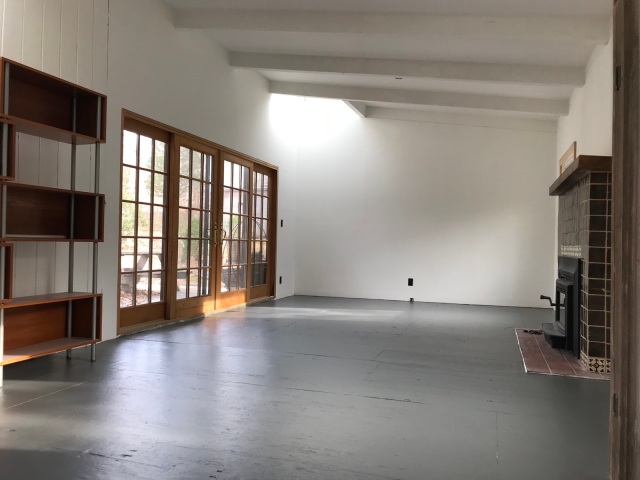 I might have left the ceiling beams unpainted, were it not for heavy stains from long-ago water damage. The easiest thing was to paint them white, too.

The plywood floor got a coat of gray floor paint as a temporary measure. Step by step and bit by bit…

P.S. The house is once again available for rent for the months of July and August (one month minimum). Read all about it, with more photos, here.

I blog (for fun) here at casaCARA, and write (for money) about architecture, interiors, gardens and travel for many national magazines and websites.
View all posts by cara →
This entry was posted in HAMPTONS, INTERIOR DESIGN, LONG ISLAND, PROPERTIES FOR RENT, RENOVATION and tagged Hamptons, summer rental. Bookmark the permalink.

2 Responses to The Great Room Becomes a Greater Room