“I live in Brooklyn. By choice.” So begins Truman Capote’s cheeky essay for the February 1959 issue of Holiday. The travel magazine had hired the writer pre-Breakfast at Tiffany’s, when he was practically an unknown, to craft a piece about his then-down-at-the-heels neighborhood, Brooklyn Heights, which they ran without even putting Capote’s name on the cover of the issue.

They published the article with just four black-and-white photos by a young photographer named David Attie, the result of several days spent in the Heights in the spring of 1958, at Capote’s rented digs on Willow Street (Attie photographed him there, above, though Capote actually lived in the ground-floor apartment and not in the part of the house with the grand staircase) and then along the gritty waterfront and the area’s back streets.

Attie captured a horse cart filled with flowers for sale, children in school uniforms doing their homework on a stoop, a barber shop, a wedding reception, an antique store, waiters at Gage & Tollner, the Promenade in the rain. 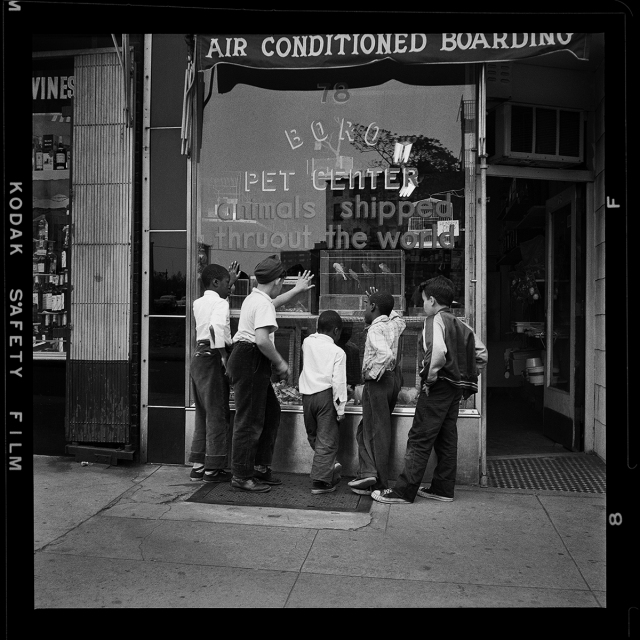 Meanwhile, boxes full of negatives from that shoot lay untouched in the Manhattan brownstone where Attie, who went on to have a long career in commercial photography, lived until his death in the 1980s. Only very recently, Attie’s son Eli, a TV writer, was motivated to look carefully through this trove for reasons he explains in an afterword.

He brought them to the attention of The Little Book Room, the boutique publisher that had brought Capote’s evocative essay out in book form years earlier, and the result is this brand-new, profusely illustrated edition, Brooklyn: A Personal Memoir by Truman Capote with the Lost Photographs of David Attie.

The regrettably brief essay, in Capote’s breakneck writing style, is pure fun. He introduces us to an old-money matron who insists he sign a petition and adopt a stray cat, pokes around in George Knapp’s curio shop, informs us that the St. George Alley, adjoining the cinema that existed until last year, was a “shadowy shelter for vagrants, wino derelicts who wandered over the bridge from the Bowery.”

He whips us back nearly sixty years to the days when Brooklyn had a working waterfront where you could sometimes — who knew — dine on ships at the invitation of the crew.

“I, for one, am always quick to accept, embarrassingly so if the hosts are Scandinavian; they always set a superior table from larders brimming with smoked “taste thrills” and iced aquavit. Avoid the Greek ships, however; very poor cuisine, no liquor served except ouzo, a sickly licorice syrup; and, at least in the opinion of this panhandler, the grub on French freighters by no means meets the standards one might reasonably expect.”

The whole thing is a delicious read, but it’s the atmospheric photos of the streetscape, still familiar yet not entirely recognizable, and the people, caught in the act of living their ordinary lives, that make this book exquisitely nostalgic — at least for those who, like myself, remember the New York City of that era in vivid childhood memories, when kids thought nothing of jumping into the East River for a swim on a hot day.

I blog (for fun) here at casaCARA, and write (for money) about architecture, interiors, gardens and travel for many national magazines and websites.
View all posts by cara →
This entry was posted in BOOK REVIEW, BROOKLYN and tagged Brooklyn: A Personal Memoir, David Attie, The Little Book Room, Truman Capote. Bookmark the permalink.