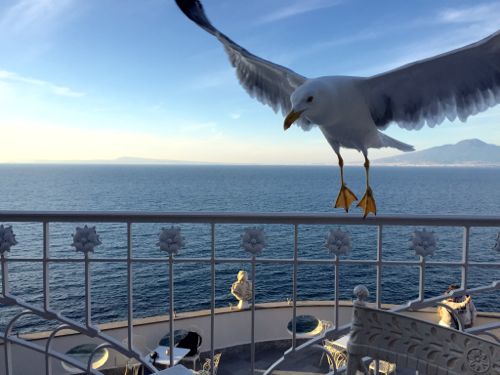 From Naples last Friday morning, my cousin Susan and I traveled an hour by train to Sorrento, our base for three days. A small, picturesque city with convenient bus and boat connections to other places we wanted to visit, exploring Sorrento itself, above, kept us busy for a day. The sights took some seeking, like the extraordinary Sedile Dominova, below, a 16th c. open-air loggia with trompe l’oeil frescoes, which we eventually found on an obscure corner in the city’s historic center.

We also hunted down a 1772 majolica-tiled wall, below, located in the back of what’s now a flower shop and event space, in a building called Palazzo Correale. We walked far out of our way, directed by locals to the Museo Correale instead, got caught in a rainstorm, and took shelter in a beauty salon. Finally we found the wall and marveled at its being there. 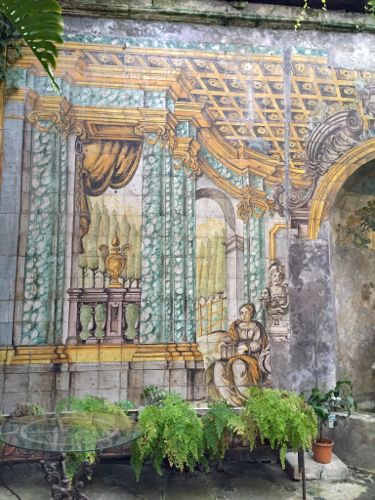 We crisscrossed Sorrento’s lovely, café-filled main square, Piazza Tasso, numerous times; stopped to look inside beautiful Rococo churches, including one with a 14th century ‘Paradise Cloister’ or planted interior courtyard, below; admired cliffside villas and, from many vantage points, the ring of mountains, including Vesuvius, that encircles the intensely blue Bay of Naples. 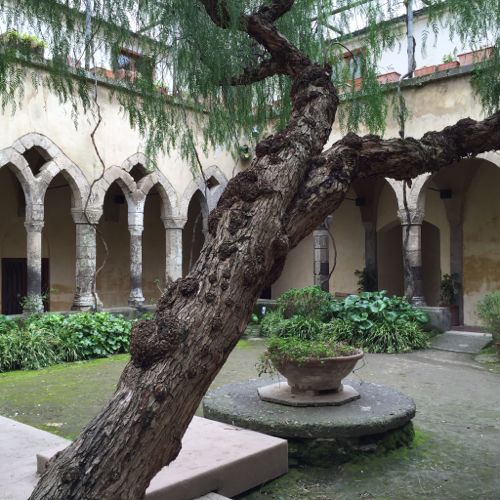 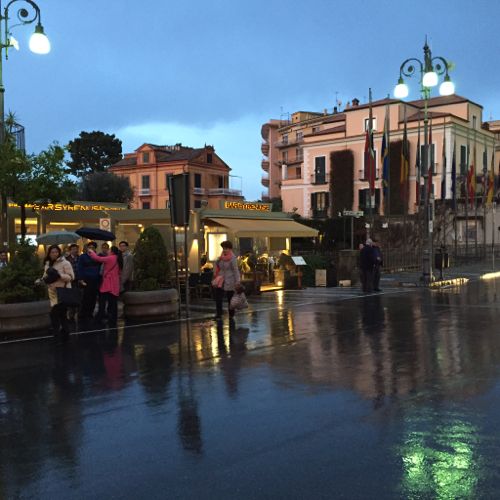 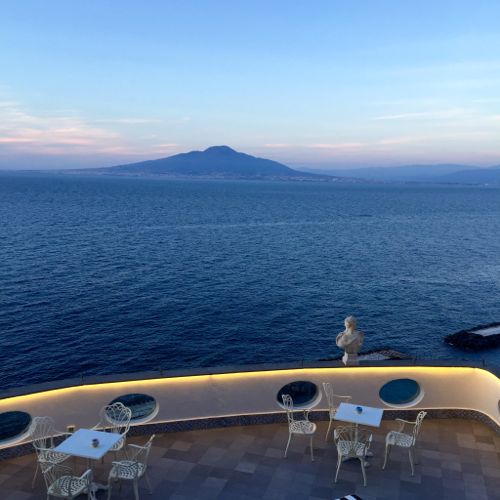 Our favorite viewing spot was the pergola at the luxurious Hotel Bellevue Syrene, above, where we were rewarded on our last night with an exquisite sunset, and entertained by seagulls trying to get at the bowl of nuts that came along with our Negronis, top.

Our time in Sorrento got off to a loud start when the rooftop room we were given at Casa Astarita, an otherwise delightful B&B, above, turned out to overlook the garden of a disco, making sleep impossible for much of the first night. The next day we were moved to an inner room whose thick walls made all the difference.

Above: Father and son restauranteurs at Le Grazie, Sorrento.

We ate well in Sorrento restaurants recommended in guidebooks, by our B&B hosts, or just stumbled upon. All had homey ambience, homemade pasta, pizza almost as good as Naples’, incredibly fresh seafood, creamy out-of-this-world bufala mozzarella (above, with cold tomato sauce, at Inn Bufalita, which specializes in it), and house wine as good as what we’re used to paying far more for at home. 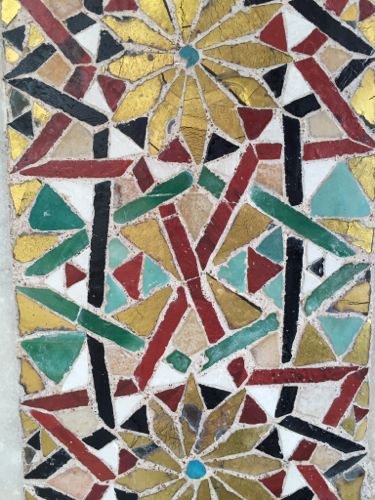 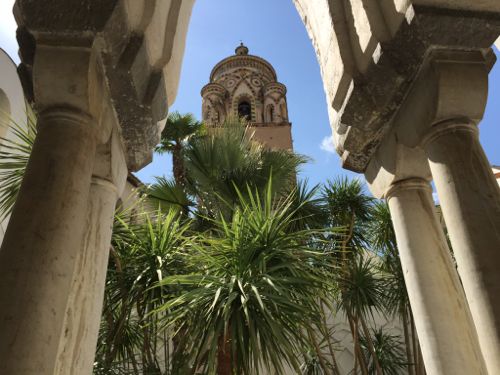 Saturday morning we took a crowded bus an hour and 40 minutes to the town of Amalfi, whose glory days were the 8th to 12th centuries. The route was all hairpin turns and photo ops. Whether it was the clear morning light, or our first sight of Amalfi’s Moorish-influenced cathedral and bell tower, above, decorated with multi-colored tiles; or the choir we heard singing; or the fact that a festive wedding party was posing for photos on the broad flight of steps up to the cathedral, we found Amalfi magical. After exploring the cathedral’s sumptuous Baroque interior and courtyard garden, we trekked around back streets, going in and out of alleys and up and down ancient stairways, before settling down for lunch at Marina Grande, a seaside restaurant that has jutted out over Amalfi’s beachfront since 1935. Homemade breadsticks and octopus three ways, below.

We had the requisite mid-afternoon espresso at an exceedingly pleasant sidewalk café, above, while waiting for the bus back toward Sorrento. It stopped at Positano, below, a near-vertical, pastel-colored pile of houses often called ‘the pearl’ of the Sorrentine peninsula. It is astounding from the road, and we disembarked there, but after Amalfi, we found Positano in close-up a bit disappointing. It’s a thirty-minute walk from the bus stop down to the town, which seemed to have little to offer visitors beyond souvenir shops and a patch of gray beach, and we didn’t linger.

Above: Terraced farms near Positano, through a bus window.

We saved Sunday, our last full day in the area, for legendary Capri. A fast ferry from Sorrento’s port arrived at the rocky island, seemingly made for Hollywood, in 20 minutes. My chief memory of Capri from a brief visit there at age 16 was of over-burdened donkeys carrying tourists’ luggage up an impossibly steep hill. The donkeys are gone, I was relieved to discover, replaced by a funicular to Capri Town at the top. There we found outposts of Prada, Ferragamo, and the rest, amidst a group of five-star hotels. We bought ourselves some fragrance at Carthusia, the venerable fragrance shop, below. 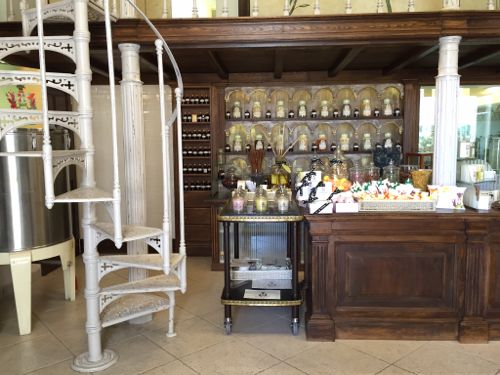 We walked around until we found a public garden overlooking the rock formations that typify the island, below, and the vistas that make Capri the ultimate in scenic thrills.

Finding little else to do in Capri Town but shop, we hopped on another bus for the 15-minute ride to Anacapri, the island’s other, quieter town, and had lunch in the garden at Il Solitario, below, where, the waitress told us, New York City mayor Bill deBlasio dined with his family last summer. 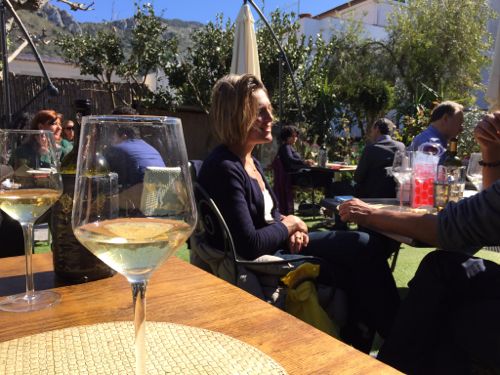 Homemade linguine with clams “from today,” below, and escarole sautéed with olives and pine nuts made a very fine meal. 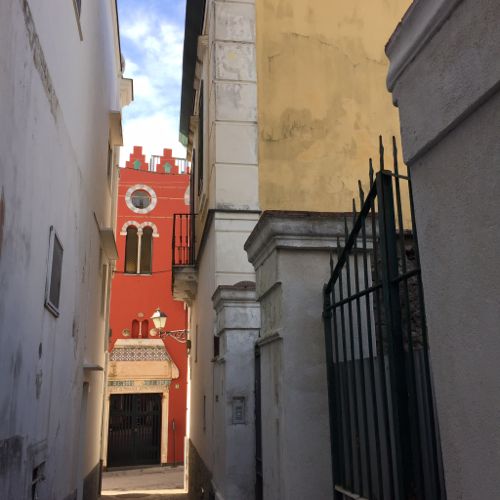 Above: A beautiful, simple church in Anacapri, outside and in; and an Anacapri street scene.

As I write this, I’m on the Frecciarossa, pride of Italy’s high-speed train fleet, on my way back to Milan to catch a New York-bound flight. A man pushing a cart with an espresso maker mounted on it comes through after every stop. He makes each cup individually; it’s free, in first class anyway, as are biscotti, chocolates, water, juice and newspapers (but only in Italian). We’re bulleting through some of the greenest and most satisfying scenery I’ve encountered from a train window.

It’s been four weeks since I began my trip in Madrid and it was only yesterday, on a bus in Capri, that I finally encountered another American woman traveling alone in Europe (from Colorado, for seven weeks, sans husband: “I told him, I’ll drag you through churches and art museums. You’ll hate it.”) The continent isn’t crawling with us at this time of year, apparently.

I’m glad I bracketed my solo sojourn with a visit to friends in Spain at the beginning, and a few days with my cousin, a stellar travel companion, at the end; and that I had the good fortune to make new friends for a three-day spell in the middle, because the best times have been with other people. Without this blog as a focus for reporting my experiences, knowing I have readers at the other end, this would have been a different, perhaps more lonesome trip, and I’m grateful, too, that you came along for the ride.