Nice in the Rain 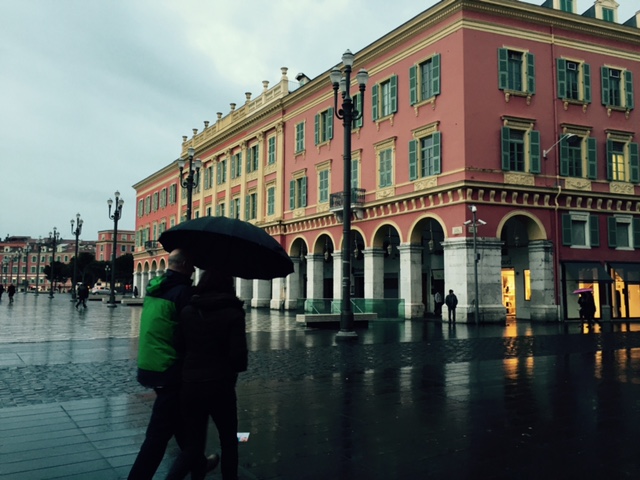 THE BRITISH UPPER CLASSES and Russian aristocracy, in search of sun, made the city of Nice, on France’s Mediterranean coast, their winter playground in the late 19th century. Most of the city’s pale or pastel-colored buildings date from that Belle Époque and from the Art Deco era, and there are few contemporary ones, giving its boulevards and squares a historic grandeur that distinguishes Nice from other beach resorts. 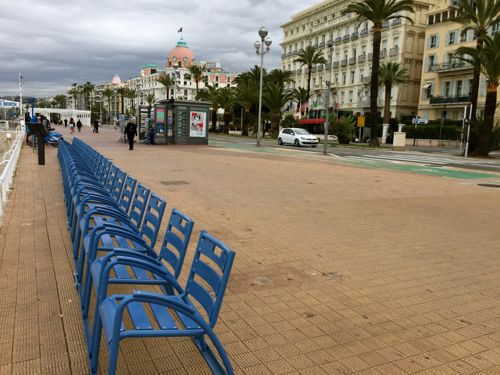 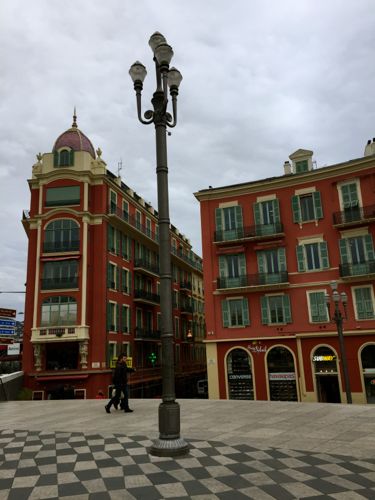 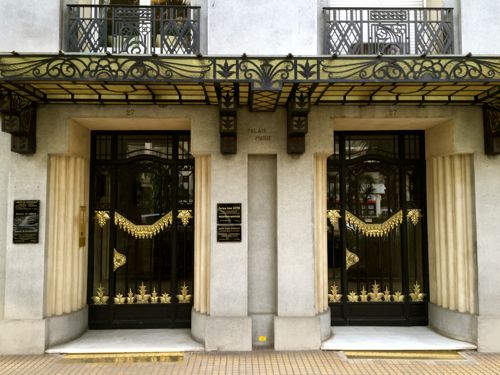 I came to Nice primarily to revisit a city I had fond memories of from thirty years ago. That’s proving a tough act to follow. Nice has 300 days a year of sunshine, so they say, but the past couple have not been among them. I arrived in a downpour late Sunday, by train from Arles, and checked into the two-star B&B-type lodging I’d booked months ago, based on rave reviews on Trip Advisor. Don’t believe them, and don’t go by the pictures, which make it look more charming than it is. The Nice Garden Hotel is dreary, depressing and threadbare. After an uncomfortable night, I spent Monday morning looking for an alternative. 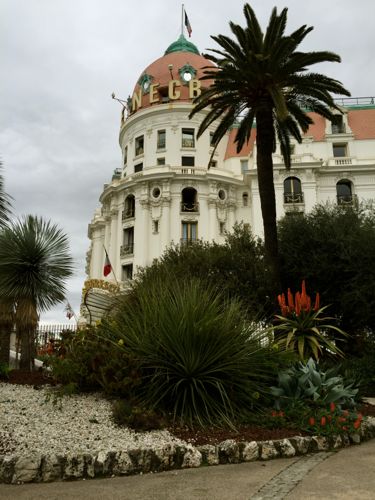 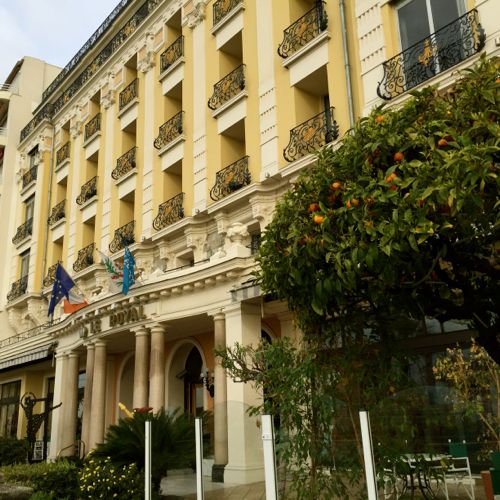 That took me in and out of several faded grand dames, above, along the Promenade des Anglais, which had rooms available but which were either too expensive (Negresco, Westminster) or too embalmed-feeling (Le Royal, which was great from the outside, stuffy within), or both. I ended up at the New York Times-recommended four-star Villa Victoria, below, on Boulevard Victor Hugo, and made the switch. 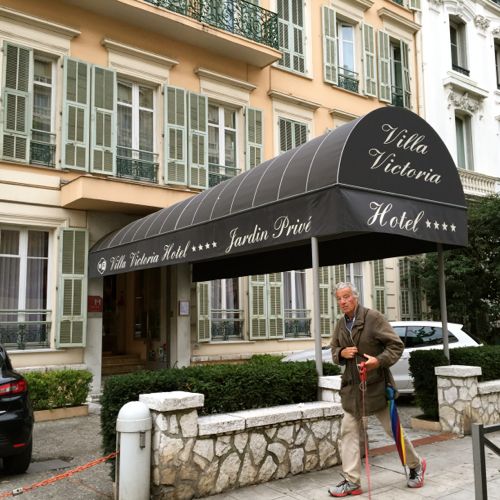 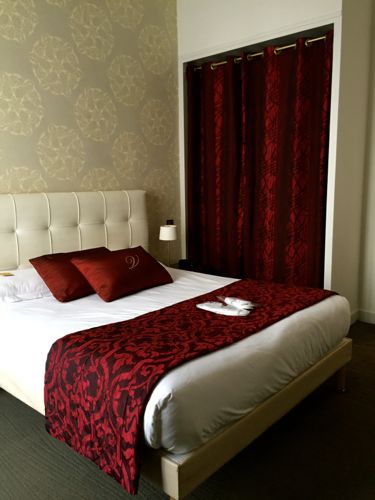 Ensconced now in much greater luxury (still for a reasonable 90 euros — only 15 more per night than the other — including breakfast and every possibly amenity, even female-sized terry cloth slippers and a pencil with a red rhinestone on it), I took in my first Nice museum, the Villa Massena, below, an over-the-top gilded private palace built in 1898, which the city has recently restored. 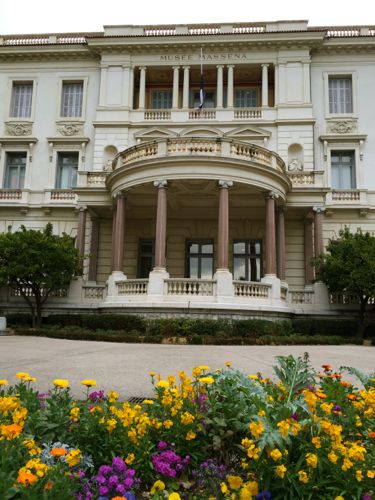 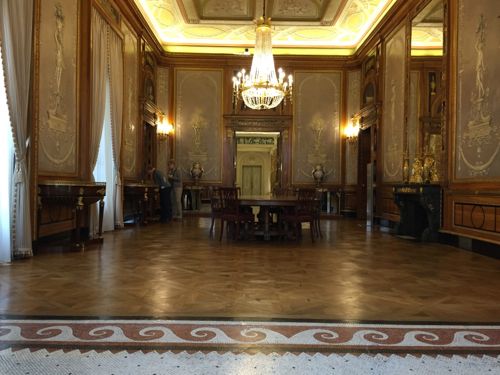 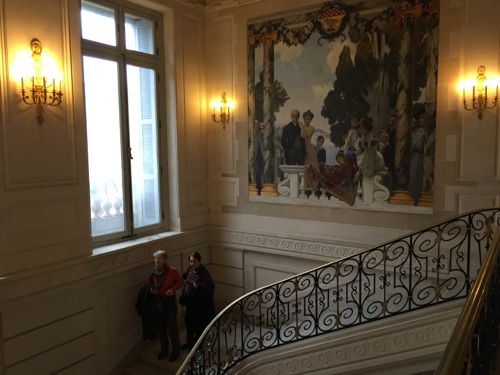 The second floor galleries, with costumes and paintings of the city in its Belle Époque heyday (below, an amusement pier that extended into sea but no longer exists) interested me more than the sumptuous decor. 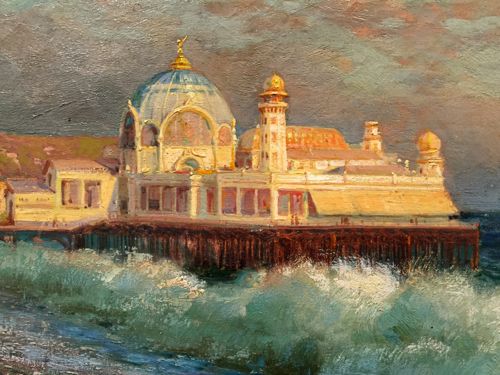 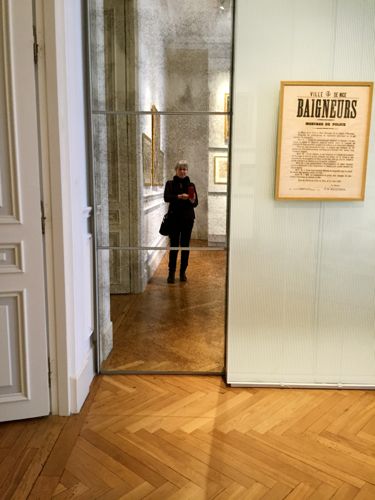 Monday is the antiques market in Nice’s Vieux Ville (Old City), below. It’s a serious market, akin to Paris’, but I’m so over all that. There isn’t a poster or a piece of costume jewelry or a Quimper plate that I could rouse myself to buy these days. But it was fun to look at objects, people and, of course, buildings. 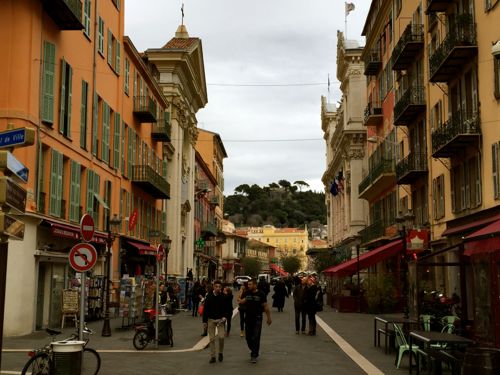 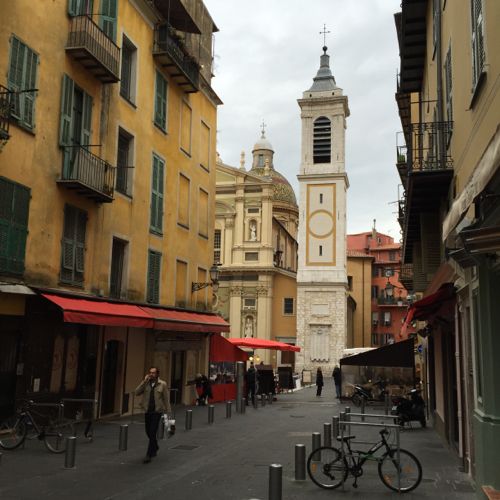 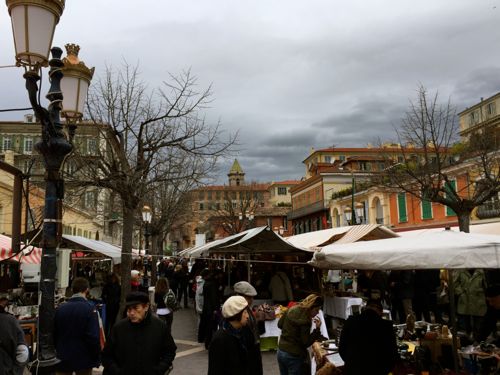 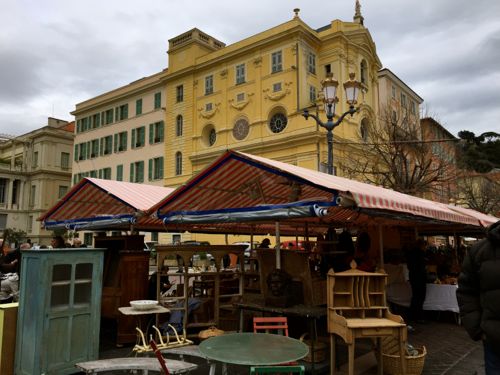 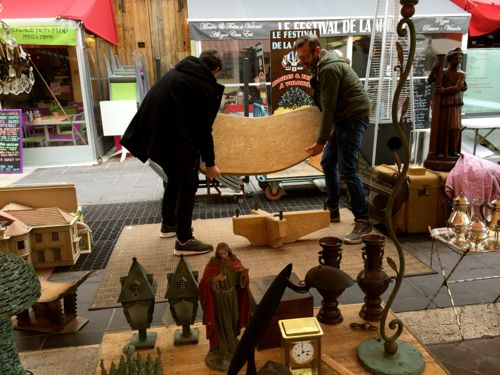 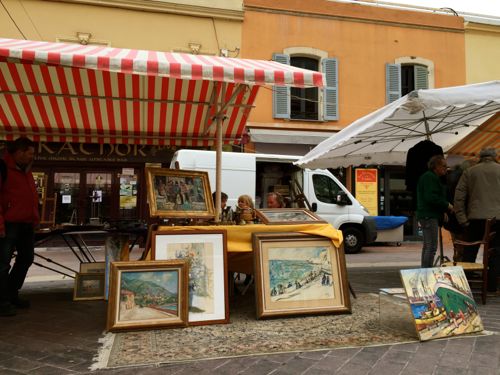 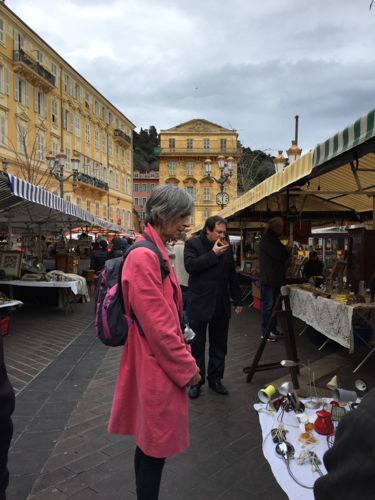 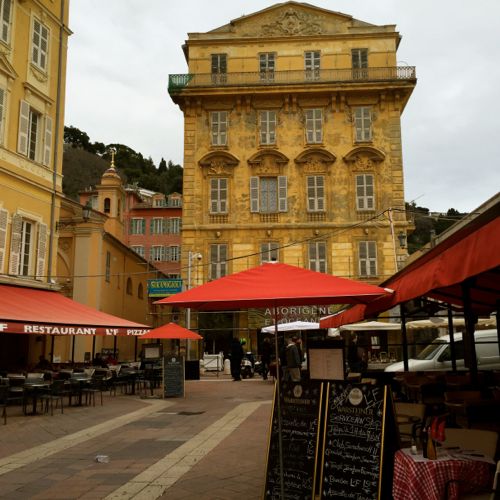 Matisse lived in the yellow house, above.

For lunch, of all the many cafes lining both sides of Vieux Ville’s main drag, Cours Saleya, I chose Le Safari, below. It was bustling, warm (outdoor heaters), and smelled pleasantly of mussels and the other seafood for which Nice is known. 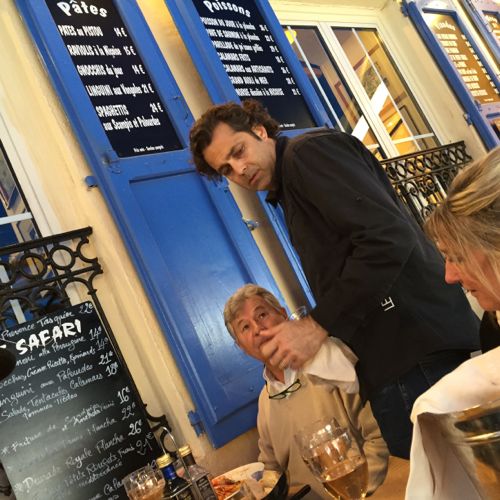 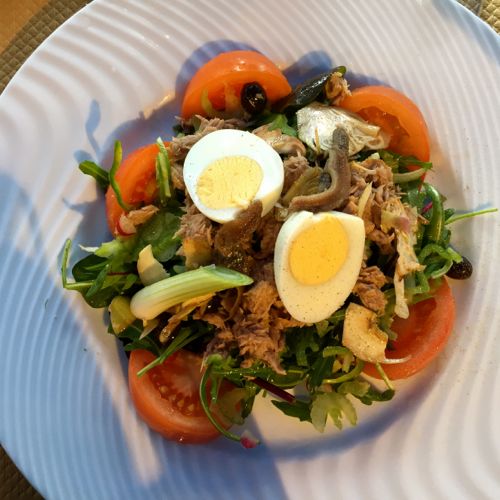 While my first salad Niçoise in Nice, above, was ‘meh’ (unripe tomatoes), the people at the next table more than made up for it. An amusing British couple who come to Nice often and know its environs intimately, from the best patisserie to which buses to take to get to which gardens, I thoroughly enjoyed my first extended conversation in days. It continued when they invited me for drinks at the apartment they’re renting in a classic Niçoise building not far from my hotel. Drinks turned into a dinner spread, below (smoked salmon, quail eggs, exquisite cheeses) and I now have personal travel consultants for the rest of my stay. 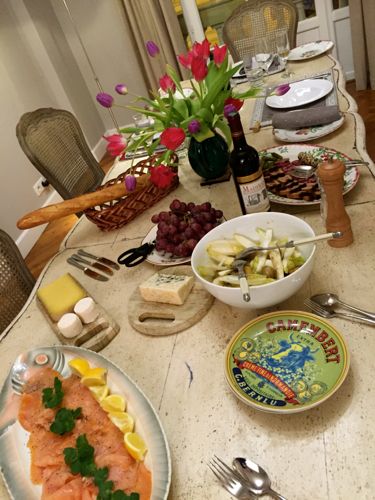 All of Nice’s twenty famous museums, including the Matisse and Chagall Museums in the Cimiez neighborhood, are closed on Tuesday, and the weather, though drier, is still gray. I’m heading to Ephrussi de Rothschild’s quirky garden in Saint-Jean-Cap-Ferrat, a half-hour bus ride away. 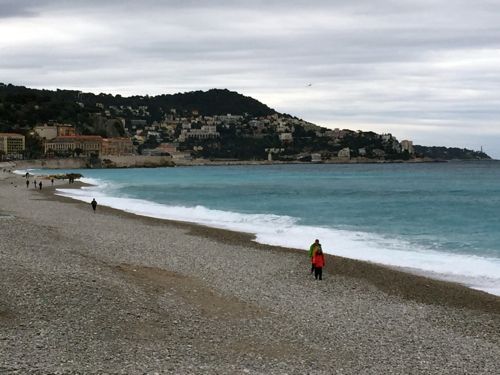 7 Responses to Nice in the Rain