THIS IS GOING TO BE HARD. Not the traveling-alone part. And certainly not the drinking vermouth part. The no-shopping part (of which more later).

I left New York yesterday in yet another snowstorm and arrived today in a city where the sky is blue and the sun is casting long sharp shadows. I’ve been to Madrid once before and don’t know it at all well. When I was here five years ago, I walked elegant boulevards and visited major museums. In the few hours I had today, before setting off tomorrow on my monthlong Mediterranean Eurail trip, I wanted to see what was there was to see on some of Madrid’s old backstreets. 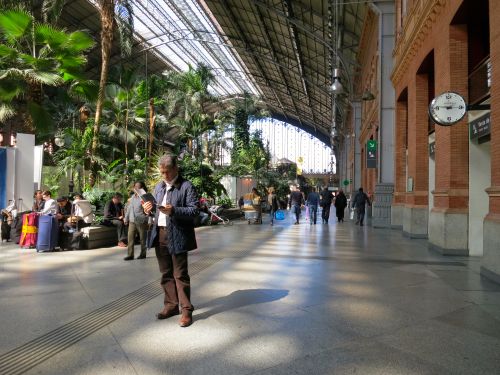 I took a bus from the airport to Madrid’s Atocha railroad station, above, which will be the launch point for my journey tomorrow. As long as I was there, I had my Eurailpass “activated” at a ticket window, which consisted of a stamp and took five minutes. Atocha’s original section has been transformed into an indoor tropical garden; what an excellent re-use for a cavernous skylit space (I believe the state-of-the-art business end of the station is where I’ll leave from tomorrow).

Exiting the station, above, I checked in to my hotel, the NH Madrid Nacional, practically across the street. It’s a business hotel, part of a large European chain. Its exterior (seen below at night, when I returned from my perambulations four miles and five hours later) is as beautiful as its guest rooms are bland and soulless. But convenience is what I was after for my first night. The lobby, below, is where I’ll have my morning coffee. 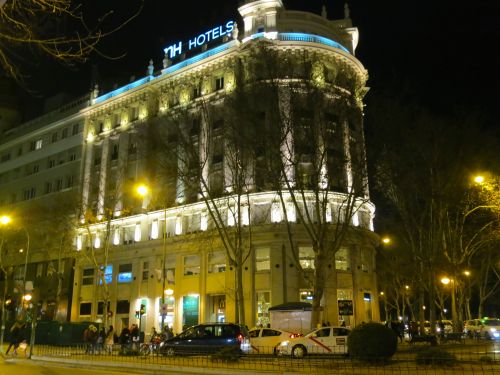 This afternoon I made a circuit, basically, of the neighborhood known as Cortes, central and very old, walking up Calle Huertas to the 17th century Plaza Mayor, heart of the city, and back along San Jeronimo, weaving in and out of labyrinthine streets, some pedestrianized. I saw tapas bars old and new, lots of old-school stores (upholstery, shoes, hats, fabrics), polished elegance and graffiti, the stylish and the homeless. 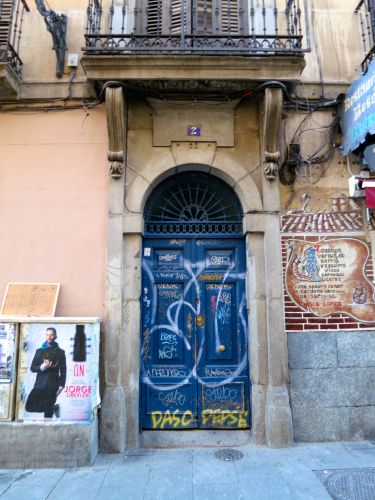 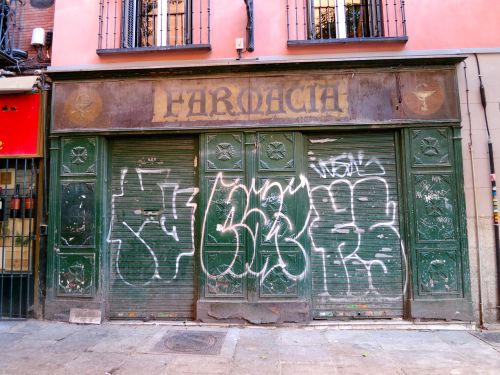 Here’s where I popped in for a break — a glass of sweet vermouth and the best olives ever (sorry, Sahadi) at Casa Alberto, two photos below, serving since 1827 from an onyx bar in the house where Cervantes wrote Don Quixote two centuries earlier. 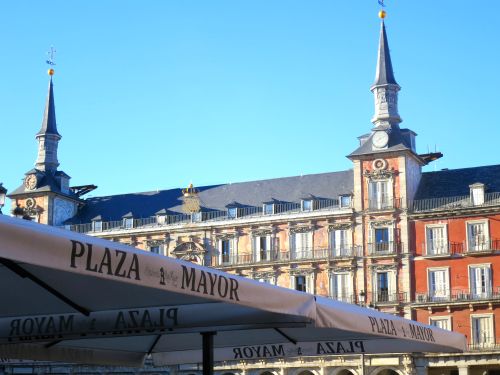 Below, a historic patisserie on San Geronimo.

Eventually wended my way back toward Plaza Emperador Carlos V, around which cluster my hotel, the train station, and the Museo Nacional de Arte Reina Sofia, which I had missed last time around. It was by then 7PM and admission (normally 8 euros) was free. I headed for the permanent collection and saw Picasso’s Guernica, which used to live at MoMA in New York, and rooms full of studies and sketches illuminating the great work. I saw more Miro in one place than ever before, and spent a long time studying a large-scale model of Josep Lluis Sert’s 1937 Spanish pavilion for the Barcelona World Expo.

Had a catch-as-catch-can dinner (a potato omelette and a glass of wine) sitting at the bar in the museum’s cafe. Below, a Lichtenstein sculpture in the Reina Sofia plaza.

Now about the shopping. I’m already feeling I packed too much. My suitcase, below, weighed 24 pounds when I left New York, and a backpack probably another 20-25. They’re both crammed. Yet look at those espadrilles, in an infinite selection of colors (10 euros; could that be because they’re basically disposable?) 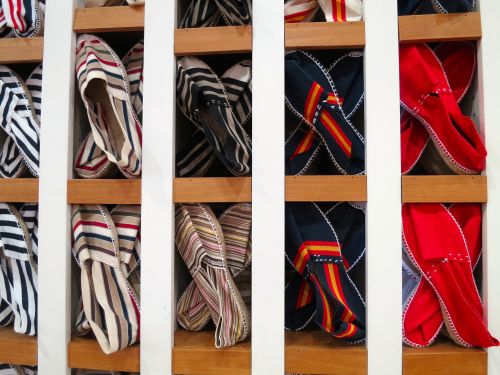 I was sorely tempted, and this is only Day 1.

I blog (for fun) here at casaCARA, and write (for money) about architecture, interiors, gardens and travel for many national magazines and websites.
View all posts by cara →
This entry was posted in SPAIN, TRAVEL and tagged Atocha, Calle Huertas, Casa Alberto, Eurail, Madrid, NH Madrid Nacional, Plaza Mayor, Reina Sofia, San Jeronimo. Bookmark the permalink.