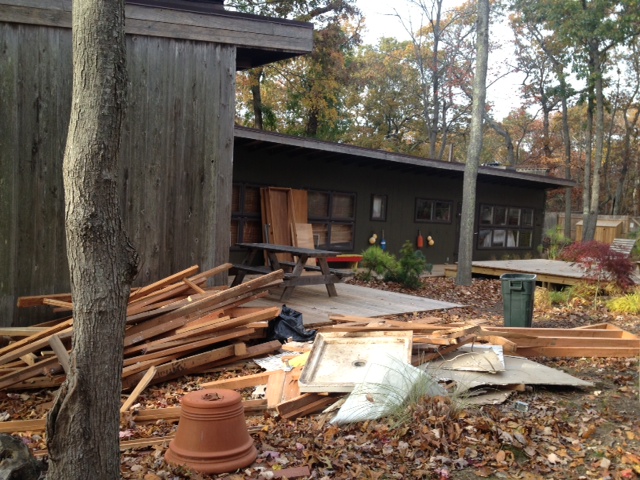 DEMOLITION has begun — and it ended, four hours later — at my East Hampton beach house, above. That’s how long it took to disappear two closets and a storage area in a corner of what’s eventually to become a ‘winter studio,’ and in summer, a great room with an open kitchen. Those four hours revealed a skylight and a large southwest-facing window, long blocked by the warren of unneeded storage spaces.

Below, top: ‘Before’ view showing a corner of the great room occupied by a group of closets. Below, bottom: ‘Now’ view showing that area of the rooms sans closets.

I love demolition. Tearing down walls is about the cheapest, most cathartic thing you can do in a home renovation, and it always makes a space lighter and airier. Sometimes you have to build walls, too, but removing them is the fun part.

I’ll be moving the kitchen into that newly opened-up corner. Yes, the kitchen I built just a year-and-a-half ago, below, has proved to be temporary; it served well for two seasons. But I’ve come to realize that if the great-room end of the long, narrow house is ever to be utilized — if people are ever to be induced to go down there — there needs to be FOOD. That’s really the only thing that gets people into a little-used part of a house, more so even than TV. Also, when I insulate that part of the house for my own use in the off-season, I’ll be needing a place to cook. 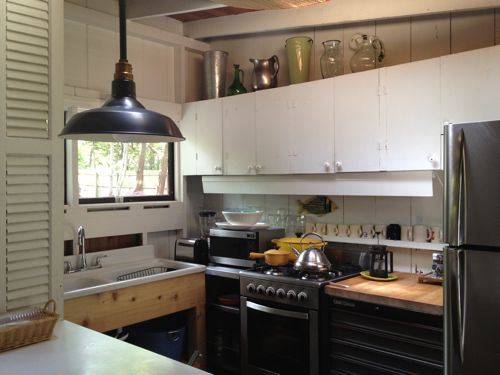 My plan is to simply move the appliances and the sink and possibly even some of the cabinets into the new area (the old kitchen area will become a small bedroom/study). I love the old kitchen, and it functions very well, so I intend to more or less replicate it in the new spot.

Meanwhile, I’m having fun on Pinterest, coming up with some of the photos below. They all have beamed ceilings, and most have a window in the center of the appliance wall. Their simplicity inspires me. And of course, a whitewash changes everything.

Via a paper aeroplane

Next up: new windows!

I blog for fun here at casaCARA, and write about architecture, interiors, gardens and travel for many national magazines and websites. My recently published posts and articles can be found here: https://casacara.wordpress.com/recent-articles/
View all posts by cara →
This entry was posted in HAMPTONS, LONG ISLAND, RENOVATION and tagged beach house, beach shack, kitchen, open kitchen. Bookmark the permalink.