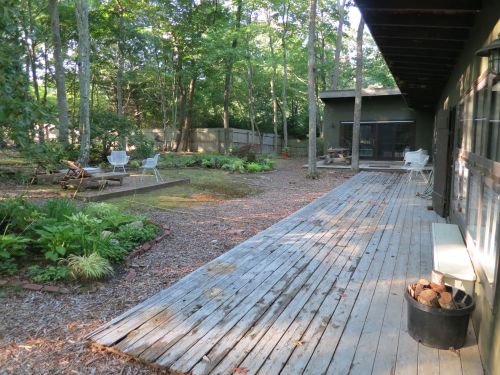 MAJOR PROJECT UNDERWAY HERE at my Long Island beach house, one I’ve been drawing and thinking over and consulting about for many months now. I’m replacing the old, rotting L-shaped deck (above, the “before”) with a new cedar deck, more complicated and larger. That is, Howard Kaye of East End Deck is doing it; or rather, his workmen are. This is the same builder who built the deck and shower platform at my previous house, which had what I considered a very successful outcome.

My friend Jifat Windmiller, an architect whose work I much admire, conceived the general idea on a napkin sketch last winter, and has generously consulted with me throughout (and is not responsible for any wrong-headed decisions or mistakes later made by me, of which more below).

The main change is that the long platform that ran almost the length of the house, and the brick patio, top at left, are being bridged by a new 13’x14′ platform that ‘floats’ two steps up. Other proportions are being tweaked as well. The platform at the far end is being extended out two feet beyond the end of the house, and the long platform, below, made shorter by about fifteen feet, to be replaced by a narrower walkway.

All this past weekend, while the workers were off, I stared at the proportions of the major deck elements and liked them.

The situation regarding the walkway — the entry point to the new deck system — has been a design challenge, one I hope will be resolved by my latest decision. Part of the issue is that, in years to come, there will be a whole other parking area and system of paths leading to the house. The current living room and kitchen will be down the other end of the house, and the main entry will be changed as well. So the entry to the deck that leads from the presently-used driveway to the presently-used door in the middle of the long front facade is essentially a secondary one, though it still needs to be functional and welcoming.

There was a time, not too long ago, when I was considering an arched Japanese-style bridge, but I’m glad I gave that up. I now realize it would have looked like something off a miniature golf course. I went instead with a 4-1/2-foot-wide boardwalk one step up, and had them flare out the sides to create what I felt would be a sort of entry gesture, below. But after living with it framed out this past weekend, I decided it looked awkward and unwieldy.

“The wings” are now gone and so is the step; it’s going to be just a plain wooden ramp, Fire Island-style. The change added man-hours; the builder has been totally chill about it.

“Howard,” I said last week, when I added the ‘wings,’ “this will be the last change.” “No, it won’t,” he replied. Evidently a voice of experience. 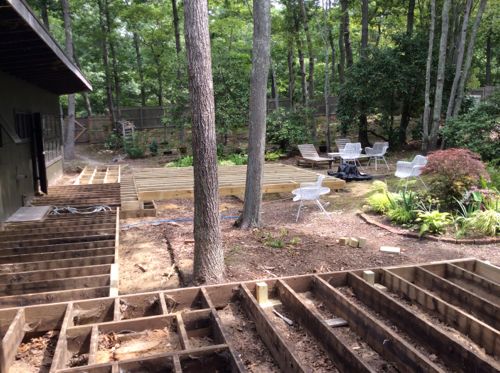 I blog (for fun) here at casaCARA, and write (for money) about architecture, interiors, gardens and travel for many national magazines and websites.
View all posts by cara →
This entry was posted in HAMPTONS, LONG ISLAND, RENOVATION and tagged deck, East End Deck, Jifat Windmiller. Bookmark the permalink.