The Joy of Troy

ONCE-MIGHTY TROY, N.Y., one of the nation’s wealthiest cities in the glory days of the Industrial Revolution (iron, steel, precision tools, shirts and collars), fell on hard times in the 20th century, but much of its impressive — in fact, gorgeous — architecture remains intact. Some of its brownstones are more stellar, even, than Brooklyn’s best, and its commercial buildings, in the uniformly antique downtown area, are great beauties.

There’s much for an architecture aficionada to explore, and explore I did last Saturday, in the company of my travelin’ cousin Susan and Brownstoner columnist Suzanne Spellen (aka Montrose Morris), a new Troy resident and now expert on the buildings of that city. (Her recent New York Daily News article on the revitalization of Troy is here.) 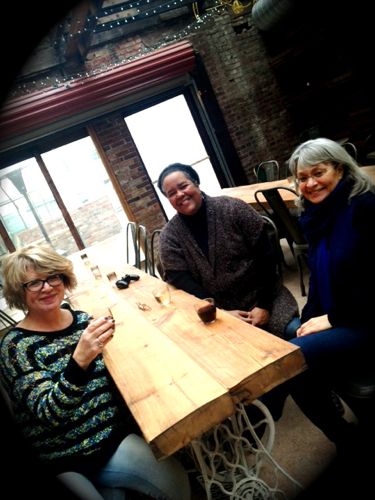 Here we are at Lucas Confectionery, a hip new wine bar/ restaurant/grocery that retains the name of the original 1863 store in this space, toasting the wonders of the city named after the ancient Troy, whose motto is “Ilium fuit, Troja est (Latin for “Ilium was, Troy is”) — and, young entrepreneurs and real estate developers hope, will be.

The obvious place to begin a walking tour of vintage Troy is Monument Square, where a towering column topped by a figure of Liberty commemorates Civil War dead, and around which are a few thriving boutiques like Truly Rhe and a phenomenally unspoiled Victorian bar/cafe, Illium Cafe (photos below of the building that houses it and its wholly original interior). Try the strawberry mimosa. 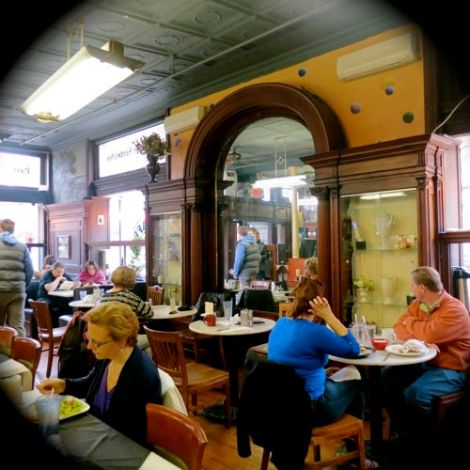 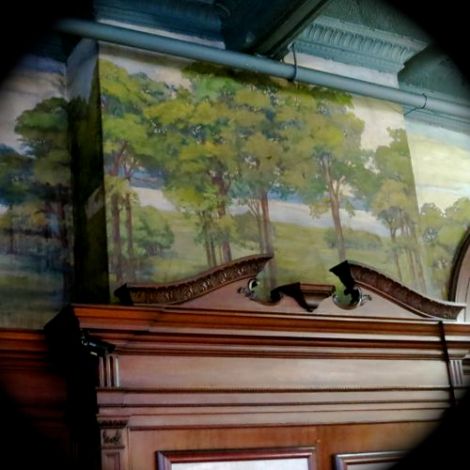 The elegant 1904 McCarthy building on Monument Square, of terra cotta with a proscenium-style arched window, below, just waiting for the right tenant. 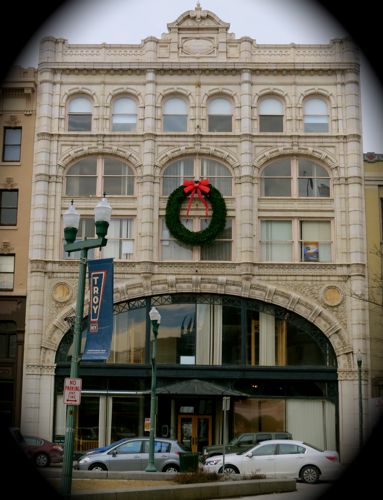 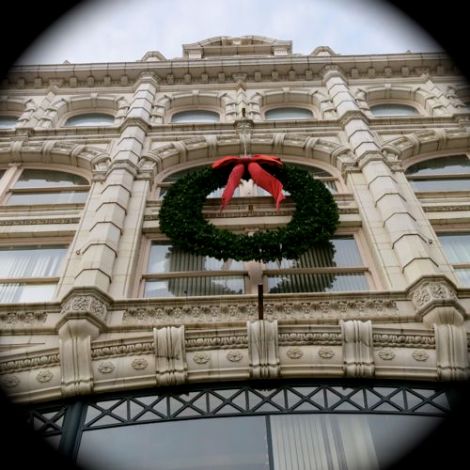 Angling off Monument Square toward the Hudson River — narrower here than in New York City, but the original source of Troy’s commercial success — is River Street, below. The spectacular wedge-shaped Rice Building, an 1871 High Gothic landmark at the corner of River at First, replaced an earlier structure wiped out in an 1820 fire that destroyed all the businesses and warehouses along River Street, which had been a busy commercial district since the 1790s. 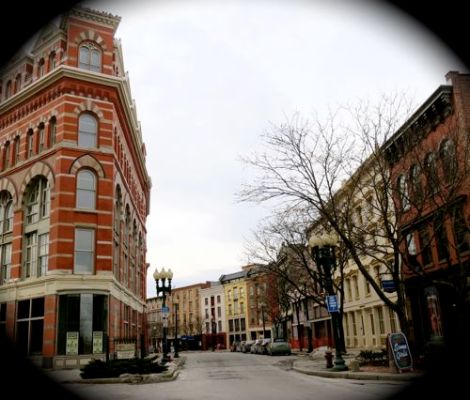 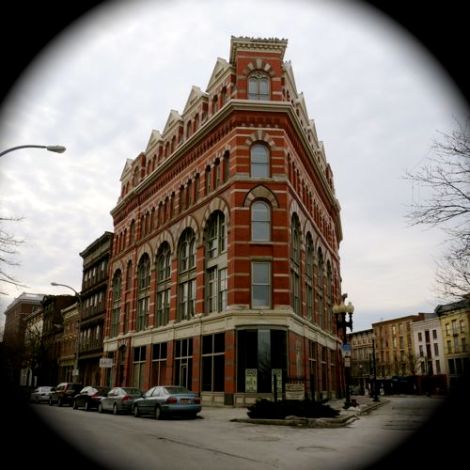 River Street is optimistically dubbed Antiques Row. More buildings are vacant than occupied at present, though the potential in its sturdy, attractive building stock, below, is evident. One of the best stores now open: Country Charm at #188, where painted cupboards and iron bedsteads similar to those found in Hudson, N.Y., shops are offered at a fraction of the price. Another goodie: Playing on the Furniture, a place to find cheerily repainted and refurbished secondhand pieces. 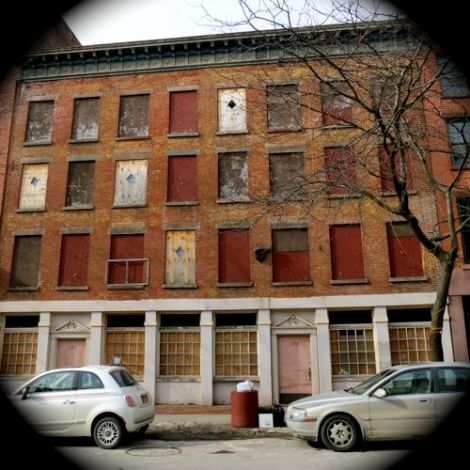 Off Monument Square in the other direction, on River and Third Streets, are livelier boutiques, vintage clothing stores and flower shops (The Botanic Studio specializes in terrariums), and more fine commercial buildings in need of tenants.

Troy seems to have no shortage of fine public buildings. Below, the interior of the Troy Savings Bank Music Hall, an 1870s auditorium with original pipe organ, long famed for its acoustics, has a full calendar of important names in classical, jazz and popular music. 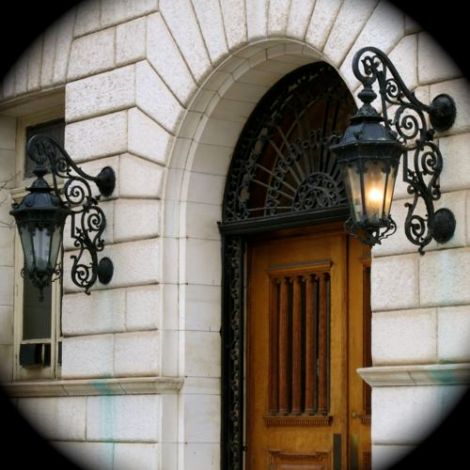 Below, two early buildings at Russell Sage College, founded in 1916 in a public park in Downtown Troy.

There are numerous blocks of well-preserved row houses — a few early Federal clapboards and many later homes of brick or stone, in Italianate, Romanesque Revival, and other fanciful late 19th century styles. The best of them seem to be along 2nd Street, which we wandered, admiring bay windows, cupolas, friezes, ironwork, cornices, and other details. 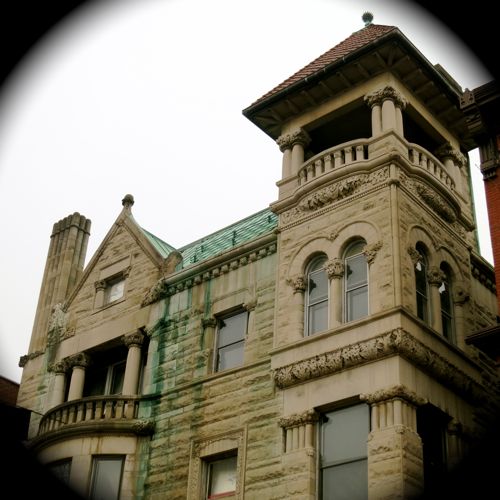 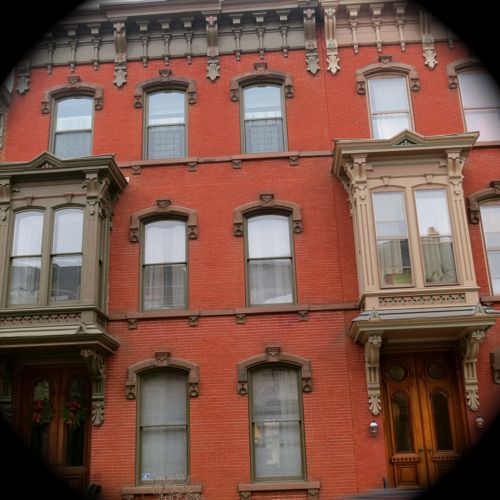 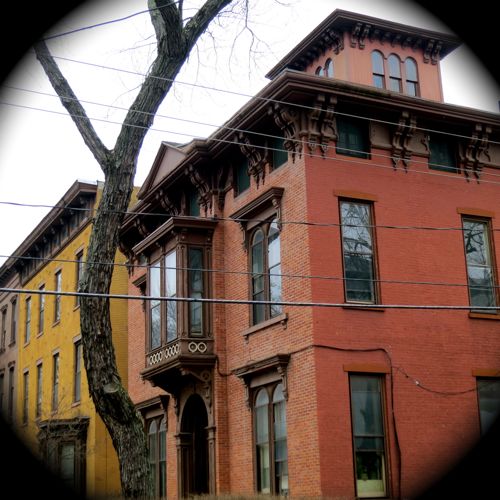 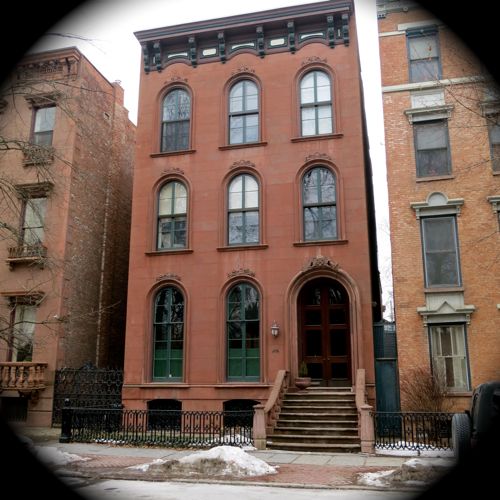 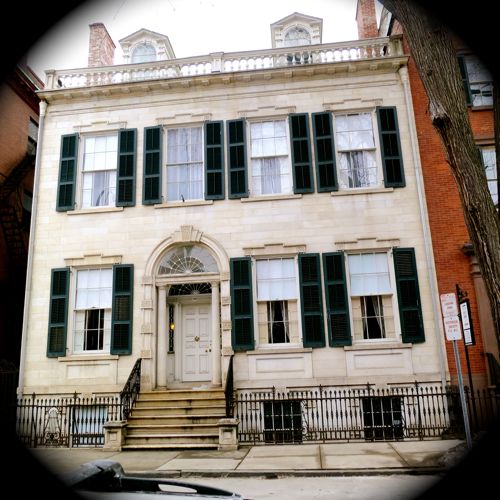 Above: the Federal style Hart-Cluett House, built in 1827 with a marble facade, now the home of the Rensselaer County Historical Society. 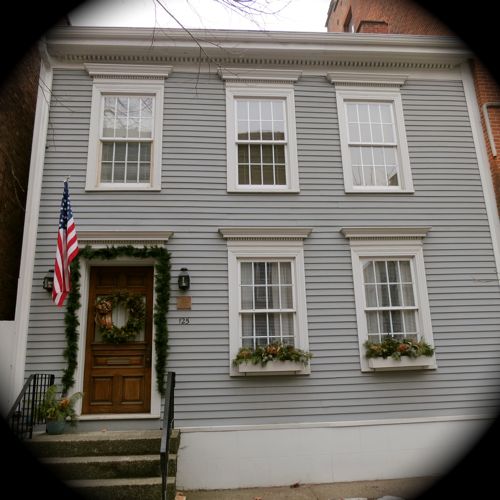 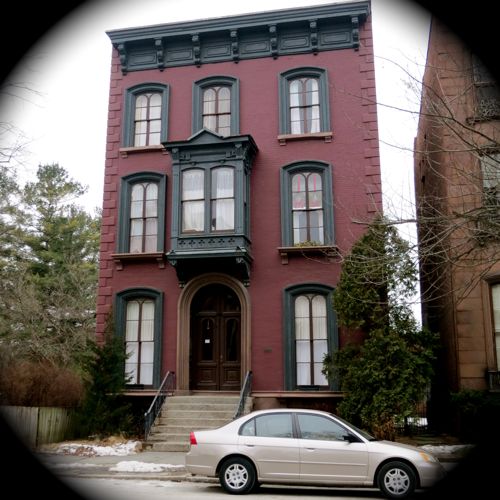 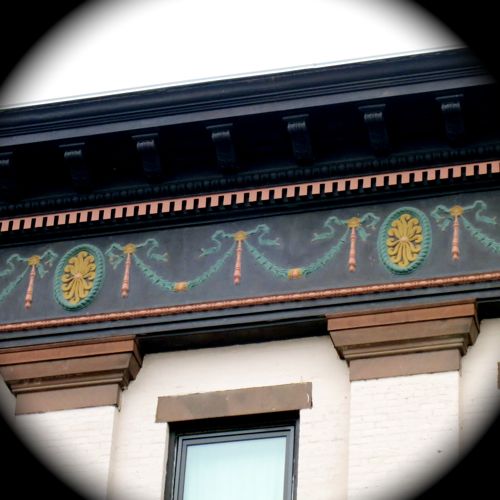 Eventually we came to Washington Park, below, established in 1840 and one of only two private ornamental parks in the state, open by key to residents of surrounding buildings (the other such park is Gramercy Park in NYC). Some of the homes are freestanding mansions, below; others are row houses.

Above, one of the last remaining cobblestone streets in Troy.

We returned to Monument Square along 3rd Street, where the homes are more modest. There are two interesting houses of worship: the 1827 St. Paul’s Episcopal Church, below, whose 1890s interior is all Tiffany; stained glass windows, woodwork, metalwork and lighting. And a cute blue-painted 1870 synagogue, in continuous use for the past 144 years. 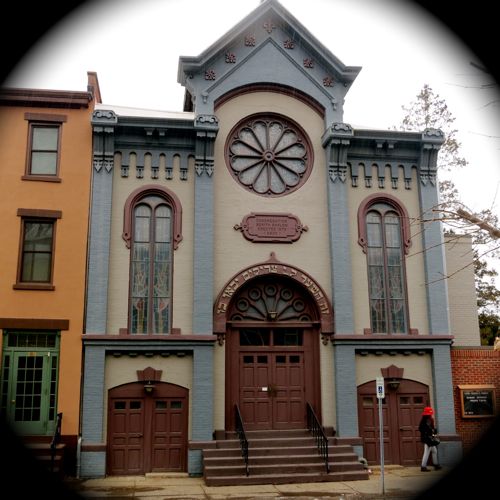 Wherever you roam, there’s interesting stuff to see, like the leaded glass storefront and rusting Art Deco hotel sign, below.

29 Responses to The Joy of Troy