RENOWNED BRITISH GARDEN DESIGNER ARNE MAYNARD started his 2-hour talk Saturday morning at Marder’s Nursery in Bridgehampton, which I attended in hopes of picking up a few tips for my own Long Island half-acre, by saying that gardens must have a sense of place — that “a garden needs to belong to its setting, environment, architecture, history.” That’s accomplished primarily by using elements of the natural landscape, in order that a garden not look “like it could be anywhere.”

Of course, Maynard’s sense of history is a lot longer than mine. His favorite period is the 1400s-1700s; his favorite architectural style is Elizabethan. His work often surrounds 500-year-old manor houses owned either by the National Trust or celebrities like James Dyson of vacuum cleaner fame and Tricia Guild, the interior and textile designer (that’s her Oxfordshire home, Appleton Manor, built in 1174 with additions as recently as the 1920s in the four photos above). So it was surprising that, in fact, I did come away from the lecture with — if not ‘tips’ — a great deal of inspiration, and even some consolation. 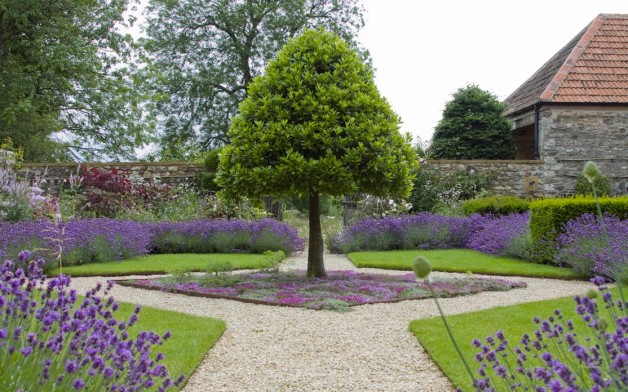 Maynard is charming and down-to-earth, describing one property in its ‘before’ stage, with a bright green lawn and red roses, as looking like “a biscuit tin,” and admitting that when he first saw a modern sculpture he was expected to incorporate into his design, his reaction was “What on earth am I going to do with that?” (It turned out to be a beautiful addition to a lavender-filled gravel courtyard, third photo from top.) 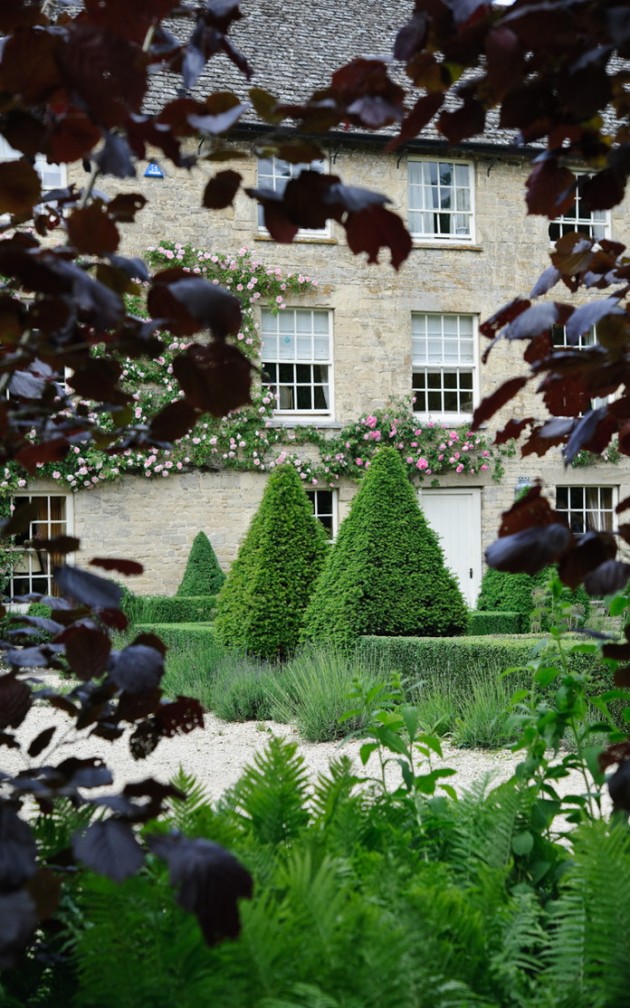 Maynard loves “shadows of the past on the landscape,” leaving in place such things as agricultural furrows that have been worn into the earth. He creates walkways by “watching where people walk” and isn’t above the quick fix, like planting lavender in places where existing concrete is broken, instead of repairing the concrete. He’s a proponent of the undulating yew or box hedge, sculpted with chainsaws (they look like hell at first, he says), and believes that even architectural mismatches like the ornate iron gates installed by the previous owner of an old stone water mill “are part of its history now.” (That made me feel better about the French doors on my modernist house.)

He “spent two years taking out the wrong things” at one job site before planting anything at all, and admits he “created a monster” of high-maintenance borders and knot gardens at his own first home in Lincolnshire. His current residence, in Wales, below, is much simpler, though he did plant a few narcissi (60,000) and snowdrops (40,000) to make the garden “feel it’s been there forever.” 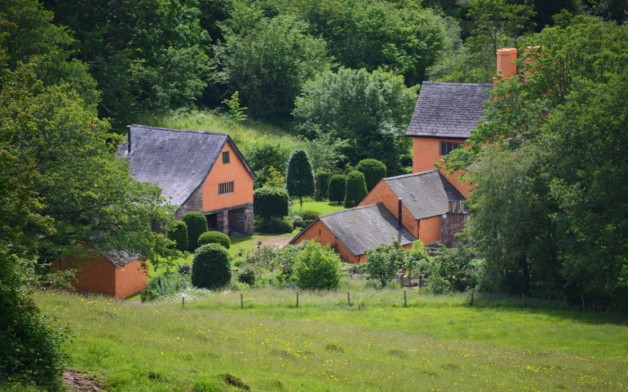 Toward the end of Maynard’s presentation, he showed renderings for the project that brought him here: a brand new oceanfront mansion, currently under construction. It couldn’t be more different from his steeped-in-history UK projects, and made me wonder if it was the novelty or the payday that drew him to the East End of Long Island (which he’d never visited before and which he was pleasantly surprised to discover was “not all delicatessens”). The house is humongous and ersatz, and I hope Maynard’s plantings of beech, boxwood cloud hedging, fruit trees, cultivated native grasses, bayberries and sea lavender will be dense, and that they, along with the creeping thyme in the crushed-shell paths, provide a much-needed, though artificially imposed, sense of place.

I blog (for fun) here at casaCARA, and write (for money) about architecture, interiors, gardens and travel for many national magazines and websites.
View all posts by cara →
This entry was posted in ENGLAND, GARDENS & GARDENING, HAMPTONS, LANDSCAPING, LONG ISLAND and tagged Arne Maynard, boxwood cloud, Bridgehampton, British, Elizabethan, garden designer, Marder's, sense of place. Bookmark the permalink.