LEAVE BROOKLYN FOR A LITTLE WHILE, you come back and find new things happening left and right. Reacquainting myself with my neighborhood after some months spent mostly out on the East End of Long Island, I’m aware of a definite and positive buzz.

Railroad tracks running along Atlantic Avenue near the newly opened Barclay’s Center. The building on the left is one of many vintage warehouses being developed as office space

Some of it has to do with the newly opened Barclay’s Center, below, long dreaded and much reviled in advance. My surprising assessment, now that it’s here: not bad. I was never enthused about the idea of a basketball arena at the intersection of Fort Greene, Boerum Hill, and Prospect Heights, fearing that with Bruce Ratner as developer, it would turn out something like the bland horror that is Madison Square Garden — especially when Frank Gehry dropped out as architect. But neither was I unutterably opposed to the project, since the area was already blighted, made up mostly of railroad yards that added nothing to the surrounding district, and it threatened to remain like that forever if planned projects kept failing to launch.

The surprising thing is that I don’t mind the architecture, by the Manhattan-based firm SHoP. It’s a rusty hulk, not necessarily in a bad way. It’s interestingly articulated and pleasing at night, when light shines through slots in the steel cladding.  There’s a swooping marquee with a keyhole open to the sky that is unlike anything I’ve seen before, and a new subway entrance with a sedum-planted roof. I find it less objectionable than expected at worst, exciting at best. 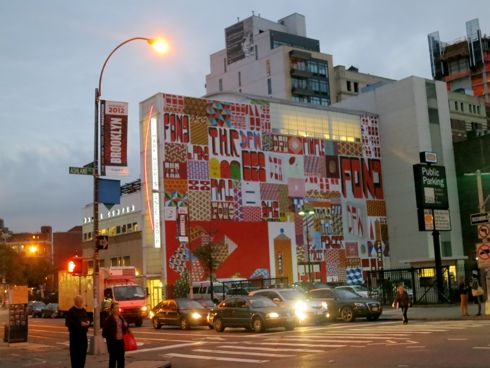 A new mural has appeared since I last looked on the side of the Mark Morris dance studio, part of the BAM Cultural District

Traffic is whizzing along Flatbush Avenue like never before, thanks to new lanes and personnel. There are complaints by neighbors, to be sure, about arena patrons peeing in the bushes of surrounding brownstone blocks. If urine is the worst problem, I’d say it’s been worth it for the economic engine this thing is likely to be. Vacant storefronts on the avenue are fewer. The Fulton Street corridor in Fort Greene is packed with newish restaurants and shops of a decidedly gentrified nature. Fulton Street! If I could tell you how inconceivable it was in 1979, when we bought an 1830s row house nearby for $36,000, that the neighborhood would ever be — not only desirable, but the essence of hip. We stepped over bums (that’s what we used to call them) on our stoop daily, couldn’t get Manhattan friends to visit, and traveled by bus to shop in Brooklyn Heights. Of course that was 33 years ago; but that’s how long it can take for a neighborhood to turn fully around.

It’s turned. The other night, my sister and I met at No. 7, a bar/restaurant that comes by its retro feel honestly; it’s part of a great row of old wooden storefronts where Greene Avenue meets Fulton. After a fancy gin cocktail — muddled blueberries and elderflower liquer, don’t ya know — we repaired to the cozy Cafe Lafayette around the corner, where I had a very satisfying couscous dish for a few dollars. Then we hied over to the newest performance space at the Brooklyn Academy of Music (above, the main Opera House), the BAM Fisher, below, a 1928 building refurbished and expanded to accommodate more of BAM’s uncompromisingly avant garde productions. We saw ‘Elsewhere,’ part of the New Wave Festival, billed as a cello opera. All I knew going in was that it was about women, and the tickets were $20. It was both exhilarating and disturbing, a combination of movement, sound, spoken word, projections, performance art, and bizarre imagery. The good news: it was only 70 minutes long and we left laughing.

The high-rise development of lower Flatbush Avenue, near the Manhattan Bridge, is creeping northward. A sliver of skyscraper at #29 Flatbush, below, is still crane-topped but already very tall.

Soon the 1929 Williamsburgh Savings Bank, below, for decades the tallest building in Brooklyn at 29 stories, will be eclipsed by many others. So it goes. As long as the architecture of the brownstone neighborhoods is protected (and for the most part, it is), I’m generally in favor of what seems like real progress. Where the Barclay’s Center is concerned, I may never go to a Nets or Islanders game, and I’m not one for huge arena concerts, but so far, I’m a fan.