THE CLASS DESCRIPTION was, to me, irresistible, and I signed up: a two-hour evening workshop called “How to Arrange Deli Flowers” at the Tribeca branch of Manhattan’s 92nd Street Y. We were to bring scissors and a container, as well as something branch-y, some kind of greenery, and 1-3 kinds of flowers but from our local deli’s outdoor displays.

I chose several subtly colored things, with an eye to how they would look in the clear glass vessel I brought along…and it turned out I had pretty much missed the point with my arty selections. My flowers, above, including three chartreuse hydrangeas, some reddish exotics, and some bitsy, buddy things (wish I knew the names). They looked pretty much just fine, I thought, cut down a bit and simply plopped in the vase — blowsy and countrified.

They did not seem to lend themselves very well to ikebana, the Japanese art of flower arranging, which is the approach of the instructor, Debbie Kopinski, top — and that’s her demonstration arrangement, done at the beginning of class, above — who trained in Japan. Debbie helped make my arrangement a little less relentlessly symmetrical and stripped some of the leaves off the red things so the stems would show. But it turned out that those who had simply grabbed one of those garish pre-mixed bouquets and used a flat plastic take-out container and some floral foam Debbie provided had the most fun. 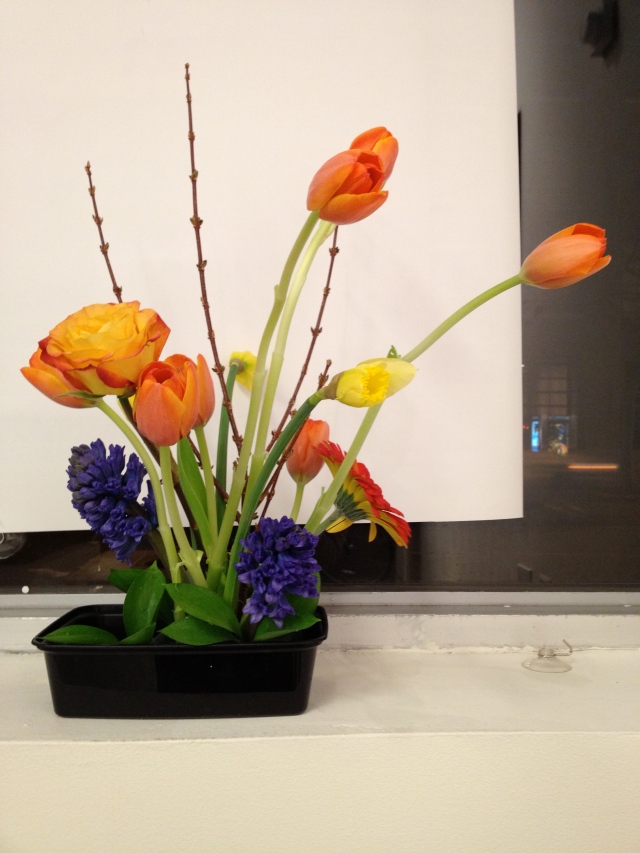 Here are a couple of the results, above and below. I should point out that these were accomplished with Debbie’s ministrations. Most people just stuck things into the foam here and there; Debbie came around and tweaked each one, cutting things to different lengths, removing leaves here and there, pulling the arrangement forward or gently pushing it off to the side, depending on how it would be placed — against a wall, or in the center of a table.

It’s not as easy as it looks.

I blog (for fun) here at casaCARA, and write (for money) about architecture, interiors, gardens and travel for many national magazines and websites.
View all posts by cara →
This entry was posted in COTTAGE LIVING, GARDENS & GARDENING, INTERIOR DESIGN and tagged 92nd Street Y, deli flowers, flower arranging, ikebana, Tribeca. Bookmark the permalink.