This post is adapted from an article I wrote that appears in the current issue of Garden Design magazine. These are my own scouting shots, taken a year ago this month.

THE VIEW FROM THIS 4,000 SQUARE FOOT ROOFTOP TERRACE in Williamsburg, Brooklyn, is a triple whammy, with the East River, the Manhattan skyline, and the monumental latticework of the Williamsburg Bridge all seen in close-up. It cried out for equally spectacular landscaping.

The client, who is in real estate, hired celebrity garden designer Rebecca Cole to turn the vast, 11th floor terrace into something two people could enjoy without feeling lost in space. Cole, a well-known TV personality and author, imagined the space as a sort of urban woodland, where you can “literally wander as you would through the woods, taking different paths around birches and evergreens, coming upon places to sit, noticing pretty little ground cover flowers.”

It does indeed feel like a natural landscape, which Cole designed by using the existing 24-inch-square concrete pavers almost like graph paper. She started with the trees (clump birch and red maple are the mainstays), “putting them in spaces that feel like they’re making winding paths. Then I figured out how many containers should surround them.” 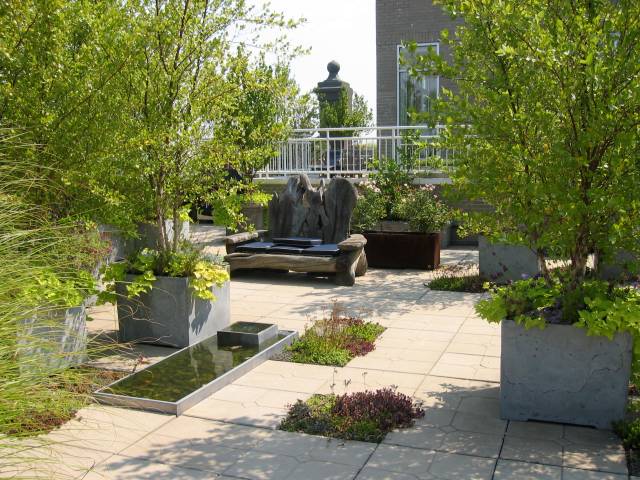 Cube-shaped metal planters mimic the grids of steel across the river. They’re filled with tough  country-style perennials like rudbeckia, echinacea, Russian sage, coreopsis, spirea, nepeta, and salvia. Sun-loving and drought-tolerant, they are surprisingly happy on an exposed urban roof.

The client wanted a water feature, but because of the windy conditions, a fountain was out. So Cole came up with an architectural solution, simple and geometric — little ‘infinity pools,’ flush with the ground. Here, too, the experience resembles a walk in the woods, where streams pop up every once in a while.

Half a dozen shallow rubber trays, pre-planted with sedums in mixed shapes and colors, form patterned ‘carpets,’ positioned for all-season viewing from the loft’s floor-to-ceiling windows.