I CANNOT RESIST a ‘House for Sale by Owner’ sign, especially when it’s an older cedar-shingled cottage on Old Stone Highway, one of my favorite roads around here. Even though I just bought a house two short months ago, I called the number on the sign (add area code 631) and went to see it this afternoon. Why?

Here’s the scoop: The house is a 1929 cottage added onto twice (most recently, a large, high-ceilinged sun room in the back, below), with a brand new well and septic, on an open/partly woodsy half-acre midway between Springs and Amagansett, a very short distance from my favorite bay beach, Louse Point, and not more than two miles from the fabled Amagansett dunes and ocean beaches, pride of eastern Long Island.

The owner is a woodworker who built himself a large (500 square foot) workshop in the back with a wood stove, that could also be a very fine artist’s studio (a writer wouldn’t need that much space). 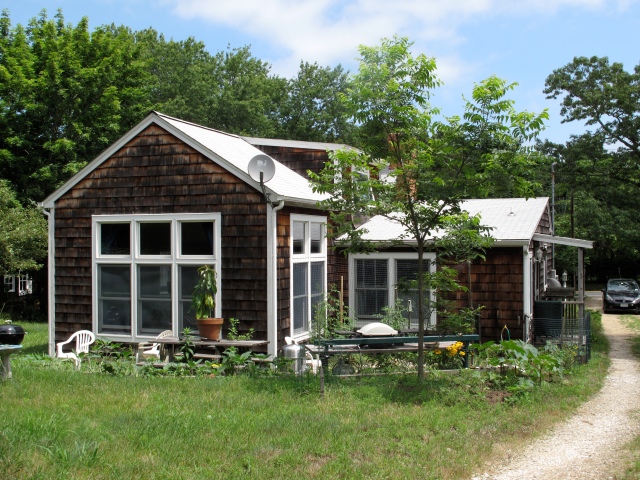 The house is about 1,200 square feet, tucked between two other cedar-shingled cottages of similar vintage, with a clean unfinished attic space that could someday be a master bedroom suite or some such. Taxes are $3,500/year.

What’s bad? The downstairs — the original part of the house — is claustrophobic. You want to tear the dropped ceiling down with your bare hands. The bathrooms (1.5) and kitchen need drastic updating. Happily, there’s that sun room at the back — but the rest of the interior needs major re-thinking.

My considered opinion is that it’s overpriced by about 100K. It’s in a quieter, more attractive location than mine (which is a slightly smaller house but more intelligently laid out, for which I paid 320K), and on roughly the same size piece of land. It already has that valuable workshop, and a shed, and a patio, which mine does not.

If you’re in the market, it might be worth a look, and a stab at negotiation.

I blog (for fun) here at casaCARA, and write (for money) about architecture, interiors, gardens and travel for many national magazines and websites.
View all posts by cara →
This entry was posted in LONG ISLAND, PROPERTIES FOR SALE and tagged Amagansett, artist's studio, cedar-shingled, cottage, house for sale by owner, Louse Point, Old Stone Highway, Springs, workshop. Bookmark the permalink.