I ACCOMPLISHED A LOT this weekend, especially in the garden (oh, my aching back). But my greatest achievement of the past couple of days was finding Vincent Manzo’s tucked-away antique/vintage design store open. His posted hours are Saturday and Sunday 12-5, but I’d tried three times during those hours and never found him in.

Three times I peered through the windows at colored glass and funky lamps and wrought iron lawn furniture and rattan sofas and wondered: is it reasonably priced? This is the Hamptons, after all, and the answer to that question is usually “No, it’s not.”

The last time I tried, I sat in my car in front of the store and called Vince’s cell phone. “I’ll be open later,” he said. “How much later?” I asked. “About 3 o’clock,” he said. It was noon. The people at the next-door gallery waved their hands. “Oh, he comes when he feels like it.” 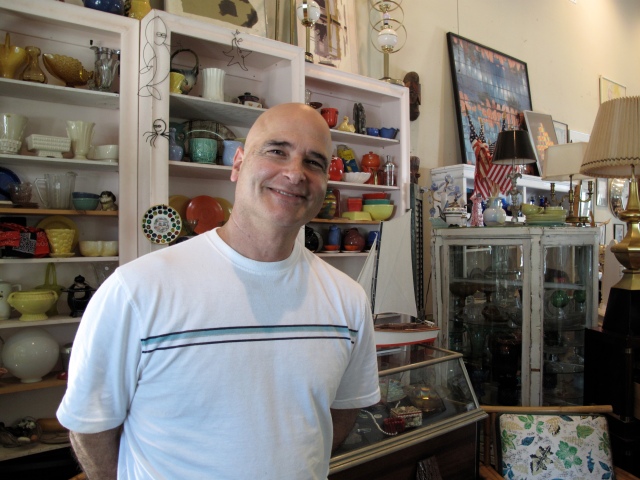 Vince likes buying more than selling. Who can blame him? The hunt is way more exciting than sitting in the store waiting for customers.

Vince, when I finally got inside the store and met him, has a good eye, and no wonder. One of his previous jobs was in display at Tiffany’s. He trawls suburban Long Island from head to tail (it’s shaped like a fish, we learned in 7th grade), discovering a load of mid-century design and colorful kitsch, as well as more traditional furniture and collectibles.

Which he sells – YES! – at remarkably reasonable prices. The things I inquired about — a Chinese red three-drawer chest with gilded hardware and a Nakashima-esque slab-of-wood coffee table, mounted on X-shaped picnic bench legs — were $75 and $125 respectively.