I’VE LANDED in my friend’s daughter’s room, vacant since Liana moved to London. It’s cozy here, with my pile of belongings in the corner, private bathroom, and great wireless connection. I feel like I’m traveling, in the neighborhood where I’ve lived for 30 years.

But there’s a fine line between peripatetic and pathetic, I realized as I pushed a shopping cart filled with the valuables I didn’t want to entrust to storage (family photos, jewelry, etc.) over here the other night.

The move out of Dean Street yesterday went fine. Six weeks in preparation, it took 4 men 4 hours to load a duplex worth of furnishings onto a truck and take it off to a warehouse. I lingered at the empty apartment after they’d gone, shedding a few tears and taking a few pictures.

This will be hard to replace

Then I went to look at an apartment in Cobble Hill. I’ve narrowed my search now to a parlor floor – that IS the best part of a brownstone – though I’d prefer a different neighborhood, a slight change of venue without a major culture shock. Say, Fort Greene (which one broker sniffed was ‘overpriced,’ and based on what I’ve seen there, he may be right) or Prospect Heights, which was astonishingly beautiful the other afternoon, when I went to see a parlor floor on Prospect Place, laden with gorgeous woodwork but narrow and brutally chopped up into small, dark rooms (overpriced as well at $2,500). 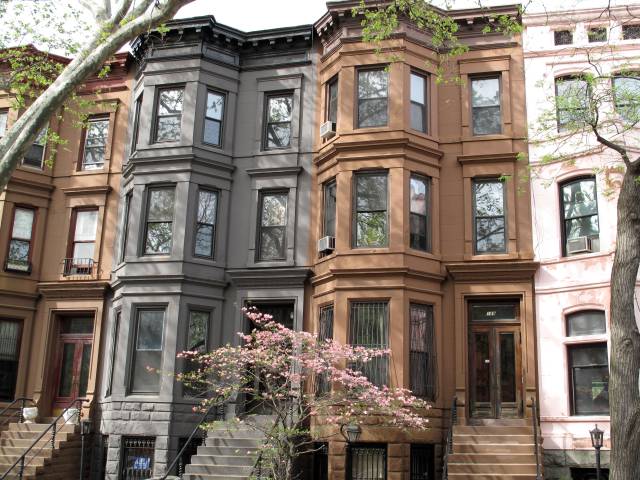 The problem is architectural travesty and it’s widespread. I’ve grown to shudder at the Craigslist buzzphrase “gut renovated.”

The 900 square foot parlor floor on Henry between Kane and Degraw in Cobble Hill ($2,300) had the 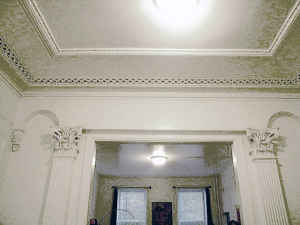 proportions I’m looking for, and the detail (nice plasterwork, right, no mantels) but, oh, the stupidity of the layout. I can live with a minuscule kitchen and bath, both tucked into the space at the back of the front hall, but not with the sheetrock walls and closets with hollow-core doors popping out of the once-grand space to divide it into three un-grand parts.

Today, I see two others, more if I can find them. Meanwhile, the Springs closing is delayed by a C of O situation involving the screened porch and an “open permit,” adding to my sense of limbo. It’s the seller’s responsbility to fix; we’re waiting on an inspector from the Town of East Hampton, and God knows how long that will take.

Suddenly, I’m clinging to my cell phone, my laptop, my car. I even felt enormous affection last night for my gym locker, waiting there for me with all my own stuff in it.

I take heart from some kind and astute phone calls, e-mails, and comments I’ve received, one from a reader offering her Brooklyn place as a sublet. She made me laugh with her own tale of renovation gone wrong, which at one point left her “with a 42″ Viking range but living in my car.”

I blog (for fun) here at casaCARA, and write (for money) about architecture, interiors, gardens and travel for many national magazines and websites.
View all posts by cara →
This entry was posted in BROOKLYN, PROPERTIES FOR RENT and tagged Boerum Hill, Cobble Hill, Fort Greene, Prospect Heights. Bookmark the permalink.

3 Responses to Sitting Here in Limbo