One is the coffin niche, an arched alcove in the wall at the top of a flight of stairs.  For  years, I assumed these were convenient places to stash religious statuary and/or vases of plastic flowers. They are certainly handy for turning the corner from staircase to hall with a large piece of furniture. But there’s debate as to whether their  intended purpose was to allow clearance for a coffin in days when people died at home.

The whole coffin niche thing could be urban legend, some say, because why not just carry the body downstairs for laying out in the parlor?  But some brownstones were multi-family dwellings even back then, others point out, and it’s possible that bodies were laid out for viewing in upper floor apartments, necessitating an architectural invention like the coffin niche. 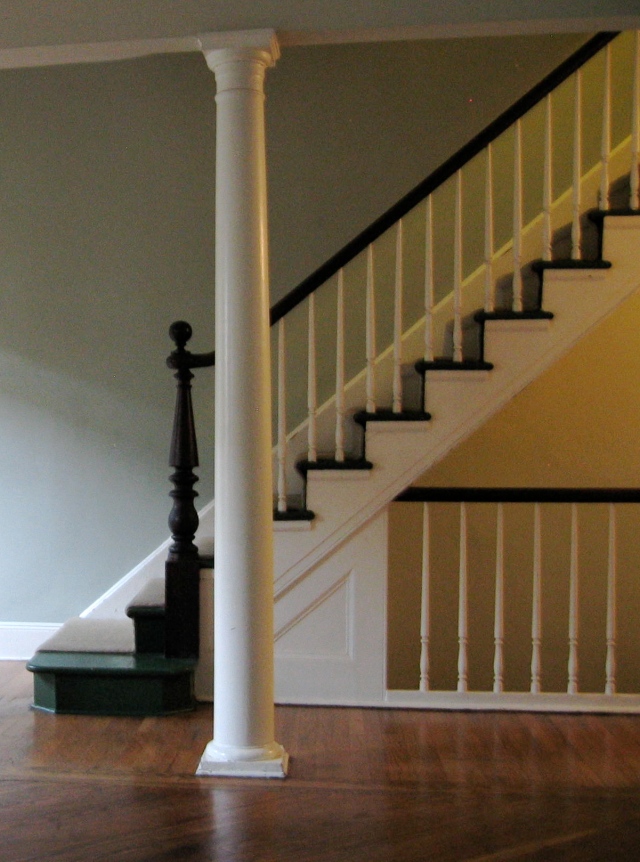 post upon making the final mortgage payment on a house.  I had heard about this somewhere and wanted to do it back in December 2001, when we finished paying off the 15-year mortgage on our house in Cobble Hill.  I went to a local wood shop and had them make a round finial for the plain newel post at the foot of the stairs on the parlor floor (at that point the house was 150 years old; had no one else ever had a mortgage on it, or had they just not heard about the supposed custom?)

Anyway, the finial looks nice and the satisfaction lasts longer than a bottle of champagne.

I blog (for fun) here at casaCARA, and write (for money) about architecture, interiors, gardens and travel for many national magazines and websites.
View all posts by cara →
This entry was posted in BROOKLYN, BROWNSTONE DECORATING and tagged brownstone, Cobble Hill, coffin niche, finial, newel post, row house, Victorian. Bookmark the permalink.